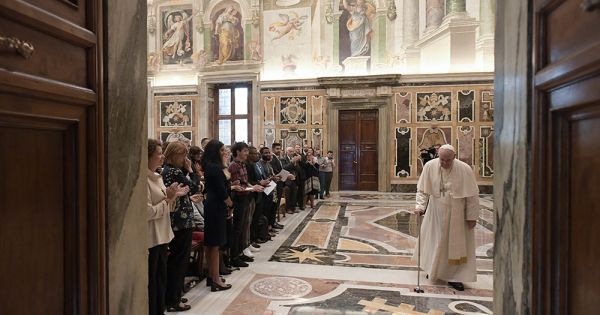 What Catholic Colleges and Universities Can Learn from Pope Francis

Pope Francis uses a cane as he leaves an audience with participants at a conference promoting educational initiatives for migrants and refugees, September 29 at the Vatican. (CNS/Vatican Media)

Over the past two years, an increasingly politicized and polarized debate has arisen around the purpose of education and what should or should not be included in the content of education. From history curricula that recognize the painful truth of Indigenous genocide and chattel slavery in America, to policies and programs that recognize the diversity of experiences related to gender and sexuality, there seems to be a ever-growing list of “controversial issues” serving as third-rail topics in elementary, secondary and even college education.

In this context, I read Pope Francis’ September 29 address at a conference on “Refugee and Migrant Education Initiatives”, held at the Pontifical Jesuit Gregorian University in Rome. Although the main purpose of the conference was to support and educate migrants and refugees, which is remarkable given the controversy of immigration policy in the United States, the pope’s remarks are also instructive. for those who reflect on the purpose and objectives of education in general and in Catholic higher education in particular.

Francis lays out some key priorities for Catholic higher education, organizing his thinking around the three areas he considers central to the work of professors and administrators in Catholic colleges and universities: research, teaching, and social advancement.

On research, the pope notes that scholars need inquiry not only to find solutions to migration and refugee crises, but also to examine the social, political and environmental causes that lead to these crises. Highlighting the many forms of political and military unrest around the world, Francis writes: “Naturally, I am referring to the conflicts that are ravaging so many parts of our world.

He adds: “At the same time, however, I would like to highlight another type of violence, namely the abuse of our common home. The earth has been devastated by the excessive exploitation of its resources and by decades of pollution. as a result, more and more people are forced to leave their lands, which have become uninhabitable.”

Catholic institutions of higher learning must be centers for the analysis of the “signs of the times” and their interpretation in the “light of the Gospel”, as Gaudium and Spes said, especially when it comes to the twin crises of migration and climate change. In this way, Francis implicitly refers to the need for a new way of thinking, what he often calls an “integral ecology” which, as Laudato Si’ he says, deals with both the “cry of the earth” and the “cry of the poor”.

Given the contentious debates around the purpose and goals of higher education today, this message from Francis also underscores the responsibility that Catholic colleges and universities must draw upon and engage with the best of scientific discovery and knowledge. He uses the global climate crisis as an illustration: “Academia — and Catholic academia in particular — is called to play a leading role in providing answers to ecological problems and challenges. Based on scientific evidence, you are able to help guide and inform the decisions of government leaders in support of effective stewardship of our common home. »

But the same logic can and should be applied to other areas of academic research and application beyond climate change. For example, Catholic institutions of higher learning should be centers of inquiry, dialogue, and teaching on cutting-edge issues, such as deepening the knowledge we have about gender and sexuality. Rather than retreating to age-old claims rooted in outdated worldviews and pseudo-scientific conclusions, Catholic universities should be leaders in engaging contemporary scientific knowledge with our religious tradition to respond constructively and charitablely to the contemporary issues and problems.

Regarding education, the pope stresses that priority in education must be given to the “most disadvantaged”. Framed again in the context of migrants and refugees, Francis suggests offering courses, modes of learning and scholarships to help migrants and refugees obtain degrees and professional qualifications.

In the same vein, Francis notes that “schools and universities are privileged environments not only for teaching but also for meeting and integration”. This is certainly true when it comes to accommodating students from diverse social backgrounds and geographic regions in a general sense, but it is also something worth remembering when it comes to differences in perspective. and interpretation. The Pope calls on Catholic colleges and universities to be a place where the stories of migrants and refugees can be heard and honored, which highlights the Church’s preferential option for the poor and marginalized.

This warning can also expand to include the voices and experiences of those who have been historically disenfranchised, particularly within the church and academy. Coincidentally, many of the communities most affected by contentious debates about the purpose and goals of education today are those of minority and vulnerable groups: people of color, women, LGBTQ people, those of other religious traditions or none, in addition to migrants, refugees and victims of trafficking, the pope underlines.

Because of their mission, Catholic institutions of higher learning should be places where such voices and experiences are not just “tolerated,” but welcomed, prioritized, and centered in the classroom and beyond. It could also extend to viewpoints, experiences, and perspectives that have traditionally been considered “outlawed” in many Catholic contexts.

In particular, I think of the myriad ways in which dialogue is still needed following the Supreme Court’s decision to strike down deer v. Wade. Regardless of one’s opinion of the court ruling, and with the church’s position already clearly articulated, there are still many questions and concerns about what this ruling means for our society, and our colleges and universities may be leaders in creating a constructive space for such discussions. . Francis tells us that we must continue the work of higher education “from a perspective of justice, global responsibility and communion in diversity”.

Finally, Francis emphasizes the role that Catholic colleges and universities play beyond the limits of their institutional borders. By using the term “social advancement,” the pope emphasizes the responsibility of these institutions to interact “with the social context in which they operate.” 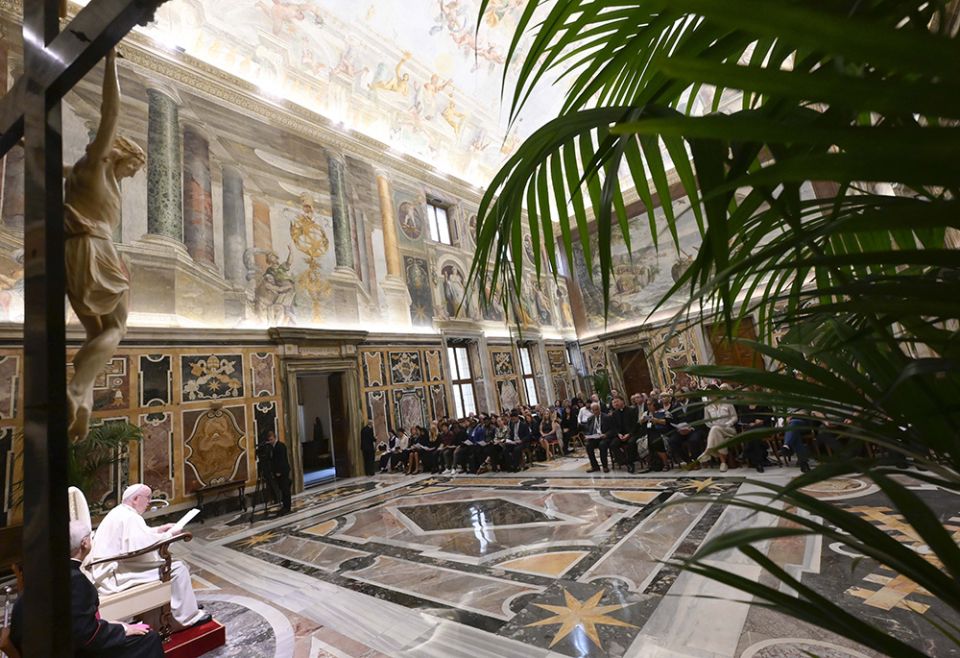 Pope Francis leads an audience with participants at a conference promoting educational initiatives for migrants and refugees, Sept. 29 at the Vatican. (CNS/Vatican Media)

He adds: “They can help to identify and indicate the foundations for the construction of an intercultural society, in which ethnic, linguistic and religious diversity is seen as a source of enrichment and not as an obstacle for the common future. .”

Again, as the current context is the migrant and refugee crisis today, this emphasis on social engagement is important because colleges and universities have long been the place to provide resources, ideas and places of constructive dialogue and education for the wider community to serve the common good.

On topics such as migration or climate change, racial justice or reproductive rights, Catholic educational institutions should not waver and avoid disagreement, but adopt a bold, balanced and thoughtful position, rooted not only in important value of academic freedom and constructive dialogue, but also in their mission precisely as Catholic institutions, which seek to pursue knowledge, truth and justice. The intellectual and practical resources of the university should not be reserved for academics alone, but shared with the community at large.

François concluded his remarks with the following reminder of what should guide our reflection and the implementation of such efforts: “Every educational institution is called to be a place of welcome, protection or accompaniment, promotion and development. ‘integration for all, to the exclusion of no one’. Now it is the responsibility of those of us in Catholic higher education to put this into practice.

Enter your email address to receive free newsletters from NCR.