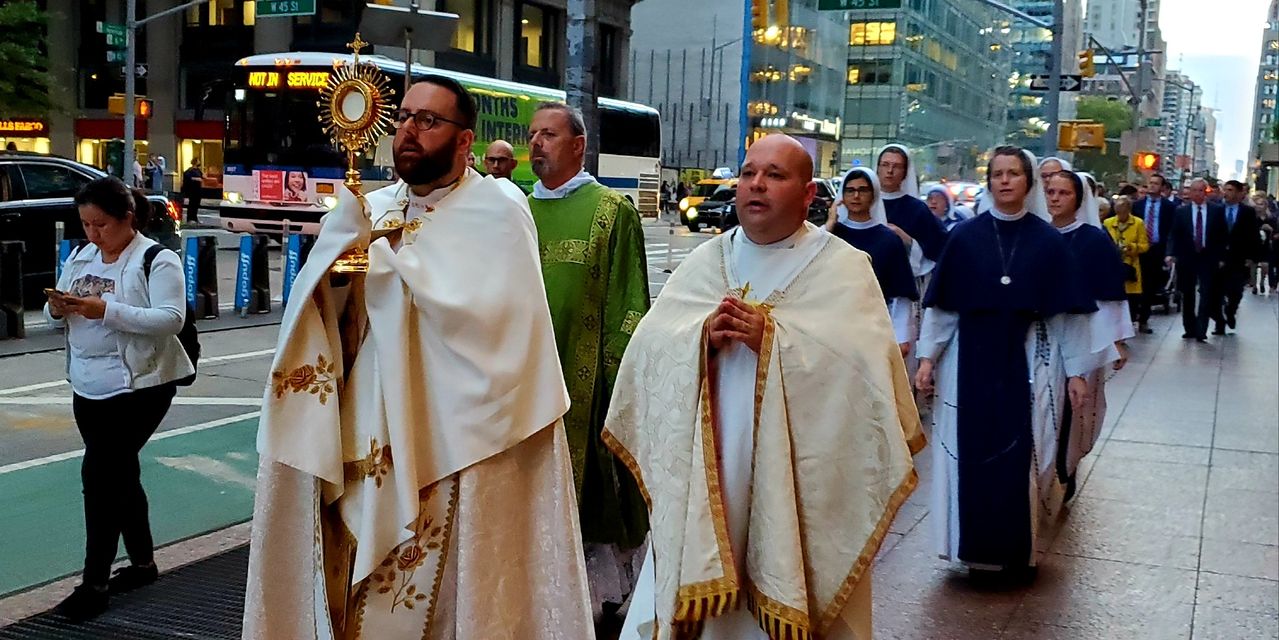 The Big Apple saw two Columbus Day parades, or rather a parade and a procession. A few hours after the most famous march, on Fifth Avenue, a hundred Catholics, including myself, gathered on Sixth Avenue and walked along Times Square. We carried Jesus Christ in the heart of the city.

Our event was a Eucharistic procession, which dates back to Roman times, and even further back to Jewish traditions. Early versions featured prayers and chanting as worshipers walked or circled around a holy place. In the Middle Ages, processions developed to include the Eucharist, the bread that Catholics believe to become the body, blood, soul, and divinity of Christ, and which is normally consumed in Holy Communion. Eucharistic processions became a common way of responding to those who denied the Catholic understanding of communion. They occur all over the world to this day.

We started at the Sanctuary and Parish Church of the Holy Innocents, a few blocks south of Times Square. Auxiliary Bishop Edmund Whalen of New York consecrated the Host during the previous Mass. She was then placed in a golden monstrance – a sunbeam-like vessel with a transparent center – for the procession. It was a ray of hope in a depressing time.

We cut a strange spectacle that was coming out of the parish and onto the street. Three priests and a deacon led, followed by 18 nuns, then the rest of the faithful. Father Michael Duffy raised the monstrance as the deacon rang a bell. The rest of us sang hymns and prayed the rosary as we walked towards Broadway and turned north.

Confusion filled the faces of virtually everyone we passed. Phones went out to check us in. More than one person stopped to ask questions. Thanks to a police escort, we kept moving forward. As people saw us coming, they piled up in the corners. Some stayed there after our visit, wondering what they had just seen.

The important thing was to stand out. We wanted people to wonder what kind of madness was driving us, and also to see a stark contrast to their normal life. Sure enough, we passed souvenir shops selling crude lace-up T-shirts as well as taxi drivers yelling at each other and equally irritable street vendors. Almost everyone we passed was in a hurry, whether they were traveling on foot, by bike or by car. But we walked slowly and deliberately, pursuing not a destination but a deeper devotion to the Lord among us.

The procession grows as we advance. Early on, a delivery driver named Rick approached a coworker of mine and asked him what we were doing. A former Anglican, he wanted to know why we believe the Catholic Church to be the true Christian Church. After learning about the nature of the procession and our desire to send a message of love and mercy, he said this was exactly what New York City needed. After five minutes of conversation, he gave my colleague a hug and walked back to his delivery truck.

Another friend was approached by a cyclist. Studying for his GRE, he wanted to learn more about Catholicism, especially why we took the time to do such a strange thing. He said sometimes he goes to a Catholic church in Queens because it’s quiet and beautiful. This young man ended up walking with the procession for 10 blocks. Before leaving, he asked if he could come to mass. My friend said anytime. The doors of every Catholic church are open.

Not everyone responded with questions or kindness. A passerby tried to make her way through the middle of the procession, explaining aloud that we were on a public sidewalk. Although I did not see it, I heard that several people spat on the ground when they saw the priests. A couple yelled at us about the sins and scandals of the church. Of course, we share their concerns and even their anger. As we went, we silently prayed that Christ would cleanse the church from evil and protect all who need and trust it.

We ended up walking about 45 minutes, ending up at a hotel in Times Square where my organization was hosting a Catholic conference. In one of the ballrooms, the priest installed the monstrance of worship, so that people could continue to pray in the presence of Christ. A few people who joined along the way stayed a few more minutes. The same goes for a handful of people in the hotel lobby, including an Emirates Airlines flight attendant.

What effect did our procession have? What difference have we made in the hearts and minds of those we have passed? We’ll never know. But one thing is certain: Christ shone in the streets of New York. We will bring him back next year.

Mr. Busch is a co-founder of the Napa Institute, a Catholic lay organization.

Catholic Church in France sheds light on its own abuse scandal

Out of the past – Sidney Daily News