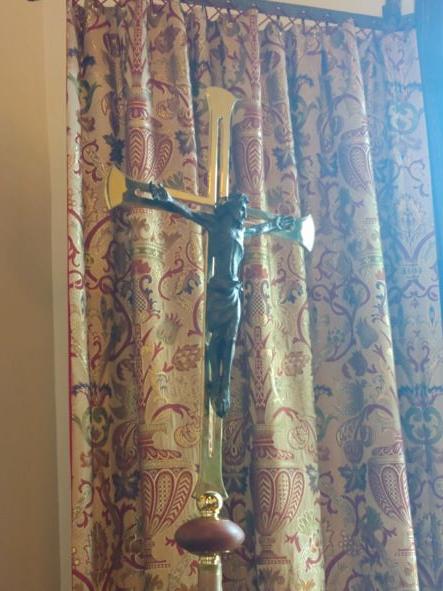 I am undertaking a long-term project of visiting as many different varieties of churches as possible and writing about the experiences in order to better understand various viewpoints and lived experiences within the wider Christian milieu, as well as to research what Catholicism calls the “seeds of truth” hidden in the soil of every tradition.

(Note to my Catholic readers: this plan does not include skipping Sunday Mass or Communion outside of the Catholic Church, so there should be no cause for concern.)

The Episcopal Church is the official American branch of the worldwide Anglican Communion. It originated from and in communion with the Church of England but functionally separate and autonomous. Word episcopall means “to deal with bishops,” because the church is governed by bishops.

An Anglo-Catholic is a person of the Anglican tradition who engages in many Catholic practices and theologies. Anglo-Catholic churches are entirely Anglican and have no communion with the pope, but many of them call their liturgies “mass”, use incense and candles, have tabernacles and pray to saints. This is the result of what is known as the Oxford Movement, in which members of the Church of England urged fellow believers to reconnect with the pre-Reformation roots of the Church.

Now that definitions are out, what was it like visiting such a church for the first time? Well, first of all, it was familiar. There was a robed choir, a pipe organ, a tabernacle, an altar, people kneeling on the pews, holy water at the entrances, stained glass windows, stations of the cross along the walls, crucifixes, a statue of the Virgin Mary and even a good number of Byzantine-style icons of various saints. According to the bulletin I picked up on entering, I was attending the “mass”.

One of the most striking things was that this church had no freestanding altar. Spanning the front of the church were three huge wooden steps, leading to a raised wooden platform which housed the elegant ambon or carved wooden pulpit on the far right and the smaller lectern on the far left . Then, further back, there was an altar balustrade separating this platform from the “holy of holies”, so to speak: a marble archway and a marble-floored alcove with a magnificent high altar against the wall from the bottom, on which sat a gold-plated Gospel, a dozen symmetrically assembled candles, a golden cross and the Eucharistic elements, in beautiful metal containers, covered with all the typical ceremonial cloth. To the side was a tabernacle embedded in the wall itself, above which hung the candle that Catholics know only too well: the candle that is lit to indicate the presence of consecrated Eucharistic elements. For these Episcopalians, the real body of Christ was in there, and they made it clear.

Due to the design of the altar, the priest had to celebrate Mass ad orientem, that is, facing outside the congregation, except when addressing them directly. This was once the traditional prayer posture, but has since fallen into disuse within Catholicism. This was the second time I attended a service organized in this way. The first was in a small Lutheran church. As before, I found myself absolutely in awe seeing the priest turn and face the same direction as everyone else. The sense of the priest and the people all standing together before God as one body, rather than the priest facing the people as some kind of teacher or interpreter, will never speak to me, and I found myself wishing that that option is more readily available to those of us who connect with it so deeply.

Still in keeping with the older traditions that most Catholics are used to following today, most services were sung or chanted, including the Lord’s Prayer and the Nicene Creed. In fact, I don’t think there was a single spoken response this whole time, except for “Thanks be to God” after the readings.

On the other hand, there were a few elements of the Mass that were decidedly Protestant or Reformed in nature. On the one hand, despite the use of the word Mass, the liturgy employed was Rite II of the Book of Common Prayer, the guide to worship used by all Episcopal churches. Structurally, it has pretty much all the same parts in the same order as a Catholic Mass, but the wording of most prayers is quite different.

In addition, we of course used the Episcopal Hymn from 1982. One song in particular stood out, Hymn 706 “In Your Mercy, Lord, You Called Me”, which blatantly speaks of the doctrine of the election, even unconditional election, with a stanza saying:

Lord, I didn’t choose you freely

until you release me by grace;

because my heart would still refuse you

if your love had not chosen me.

It was a poetic expression of a typically Lutheran and Reformed/Calvinist way of thinking about election and grace, and while it is by no means completely irrelevant to Catholics, it certainly has some branches in the theological tree of the family since Augustine.

If it weren’t for the use of “we” instead of “I” in the creed and this very reformed sounding hymn, I would have almost forgotten that I was not in a Catholic church that had retained its high altar and altar rail.

Perhaps the most unique element of the service was in the prayers, when we were called to pray for “His Holiness Francis the Bishop of Rome, Justin the Archbishop of Canterbury and His All Holiness Batholomée the Patriarch of Constantinople” . This highly ecumenical little prayer also had the distinct flavor of branch theory – the Anglo-Catholic idea that “the one, holy, catholic and apostolic Church” exists in three branches: Roman Catholic, Eastern Orthodox and Anglican, the three communions which maintain, according to their beliefs, the apostolic succession and the seven sacraments. Although this theory is dismissed as exclusive and elitist by most other Protestants and as theologically untenable by most Catholics and Orthodox, it still has some traction in Anglican circles. Although I myself am not convinced by the theory of the branch, I could not help but think that it was pleasant to hear praying for my pope in this non-Catholic church, and I could enthusiastically approve praying that he, together with the Patriarch of Constantinople and the Archbishop of Canterbury would faithfully preach the gospel.

As I entered and left the church, I saw a large number of brochures and booklets containing prayers, devotions, information about the church, and information about Al-Anon meetings there and about the help for addiction. There were also a number of rosaries as well as a guide to “methods of using the rosary” which included the standard Catholic prayer and various non-Marian adaptations. In general, the entire building showed the same thoroughness and careful planning as the sanctuary and the liturgy, as well as the same beauty, especially in their small but breathtaking library.

Overall, any visitor to a self-identified Anglo-Catholic parish will no doubt be struck by the respect they experience there and may be surprised to find it accompanied by warmth and welcome. An uninformed person might as well mistake the service for a genuine Roman Catholic Mass, but those expecting it to be utterly indistinguishable may be surprised to find avowed Protestant sentiments sprinkled throughout. Any Episcopalian will be at home, though they may find the affair a little stuffy. Despite this questionable suffocation and the fact that few people were present, I found the parish surprisingly dynamic, alive with love for its tradition and passion for its community.