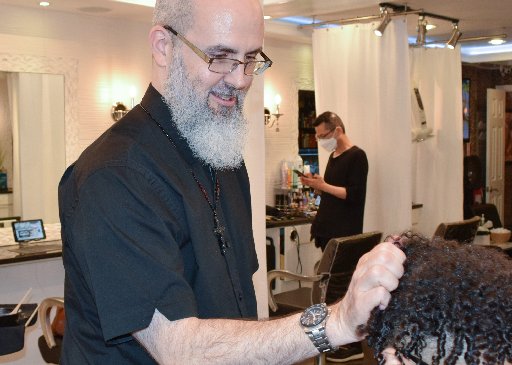 ARLINGTON Virginia — In June, rainbow-colored flags flew outside restaurants, signs with mantras such as “Love is love” rested in windows and parades marched through the city streets, all to celebrate Pride Month.

The LGBTQ event grew out of the Stonewall Uprising, a conflict between police and a gay club in June 1969 in Manhattan that led to protests and further sparked the gay rights movement.

During Pride month, another gathering took place as members of a church apostolate infiltrated a quiet, private room for their June meeting.

A chaplain heard confessions as members prayed the Rosary, followed by a reading aloud of the five goals of the apostolate: chastity; prayer and dedication; camaraderie; Support; and be good examples/role models.

Afterwards, the chaplain gave a short talk and the members took turns updating the group on how they lived the goals.

“Most people who come don’t miss a meeting,” said Father Richard E. Dyer, chief chaplain for the apostolate in the Diocese of Arlington.

The members belong to Courage, a church apostolate for people who experience same-sex attraction. They meet weekly or monthly, depending on the chapters, for confidential meetings. The group supports and empowers each other, Dyer said.

Courage began in 1980 in New York under Cardinal Terence Cooke, who saw the need to support Catholics experiencing same-sex attractions and who sought to live chastely in accordance with church teaching on homosexuality.

The Catechism of the Catholic Church explains that homosexual acts are contrary to natural law, close the sexual act to the gift of life and do not reflect sexual complementarity. However, men and women with a homosexual tendency “must be welcomed with respect, compassion and sensitivity” (no. 2358).

Courage’s first meeting was held at a church in Manhattan. The following year, the members identified the five goals and chose the name Courage. The apostolate has spread to other US cities and Canada and now has chapters around the world.

In 2004, the Diocese of Arlington opened a chapter and Father Paul D. Scalia, then parochial vicar of St. Rita’s Church in Alexandria, Virginia, was appointed chief chaplain. He is currently pastor of St. James Church in Falls Church, Virginia, and Diocesan Episcopal Vicar for Clergy.

There was immediate interest. “Even before I started the chapter, some men approached me asking for help,” Scalia told the Arlington Catholic Herald, the diocesan newspaper.

“We have church teaching and we’re good at teaching it clearly, but we weren’t as good at providing people with a way to live that teaching,” said Scalia, who viewed courage as a way for the church to provide that. Support.

The first meeting attracted about ten men. Since then the apostolate has developed into two chapters with about 20 members.

In the 1980s, as the Courage Apostolate formed and grew, Joe (who asked that his real name be withheld) and his wife separated due to his same-sex attraction. He started chasing the men.

Raised a Catholic, he knew his lifestyle was not aligned with church teaching. But he continued to attend Mass, and in 1992 he learned of the existence of a Courage Chapter in the Archdiocese of Washington.

“I basically knew I wasn’t happy,” he said. “I think everyone who enters the apostolate and has lived this lifestyle has recognized that it is not a happy lifestyle.”

He decided to attend a meeting. Nervous that anyone might see him, he drove to the scene early to make sure he wouldn’t be seen entering.

After the first meeting, the word that came to mind was “hope”. But “I was into the lifestyle at the time and I had a partner and so I didn’t really want him to know I was looking for a way out. … I didn’t have the courage at the time.

The following year, his companion died of AIDS.

“After that, it started the process of converting my heart,” he said. He returned to the apostolate in 1998 and has been a member for over 20 years. He is now involved with a diocesan chapter in Arlington.

“What I found was a community of Catholics who wanted to live a chaste life,” he said. “I was led by the Holy Spirit to find the Apostolate of Courage.”

Garrett Johnson worked as a hairdresser, was openly gay and heavily addicted to marijuana. By his late thirties, he was struggling and losing clients.

“I was very isolated, cut off most of my friends and family,” he said. “I kept thinking that God couldn’t have created me just to get by.” Raised Catholic “nominally” – his mother grew up Catholic and his father was an agnostic/atheist – he said he stopped going to church around the age of 12.

He continued to struggle, his marijuana addiction making him physically ill. Around this time, his mother came back to the faith and gently encouraged him. He quit smoking and became more involved in the church. He told a priest about his same-sex attraction, and that’s when he heard about Courage. He felt resisted, but he committed to going to five meetings.

He attributes a Courage conference as the place where God made a change in him. Held annually, the conferences bring together members from different chapters for holiness and faith discussions, workshops, and prayer.

At the end of the conference, another participant put his arm around him as a sign of camaraderie. Johnson was resistant to physical contact, especially from men. “I felt something happen inside me,” he said. “It allowed me to be closer to men in a friendly, chaste and brotherly way.”

He has been a member of Courage for nine years now, attending chapters in Arlington, Washington and Baltimore.

“I’m drawn to the truth, which is what brought me back to the Catholic Church,” Johnson said. “What draws people to the church is…truth and love.”

Johnson said the church and other Catholics can help by supporting church teaching. “Tell the truth, but help us carry the burden,” he said. “The best way (Catholics) to be helpful is to be honest with us and walk with us,” he said.

Courage also has a ministry called EnCourage for family and friends of people experiencing same-sex attraction.

These support groups began forming in 1987 to meet the spiritual needs of spouses, parents, friends, and others who had a loved one experiencing same-sex attraction. EnCourage now has chapters around the world, including in the Diocese of Arlington.

Joe said it takes courage to live a counter-cultural lifestyle.

“(Courage’s founders) knew it would take courage — intellectual courage, spiritual courage, even physical courage — to challenge the cultural whirlwind we find ourselves in,” Joe said.

For Dyer, the members of Courage are an inspiration.

“Members heroically live chaste lives,” he said. “(Courage has) been one of the great blessings of my priesthood.”

Bartlett is on the staff of the Arlington Catholic Herald, the newspaper of the Diocese of Arlington.

In Kenya, Mexico, nuns discover the need to coordinate resources for care of the elderly