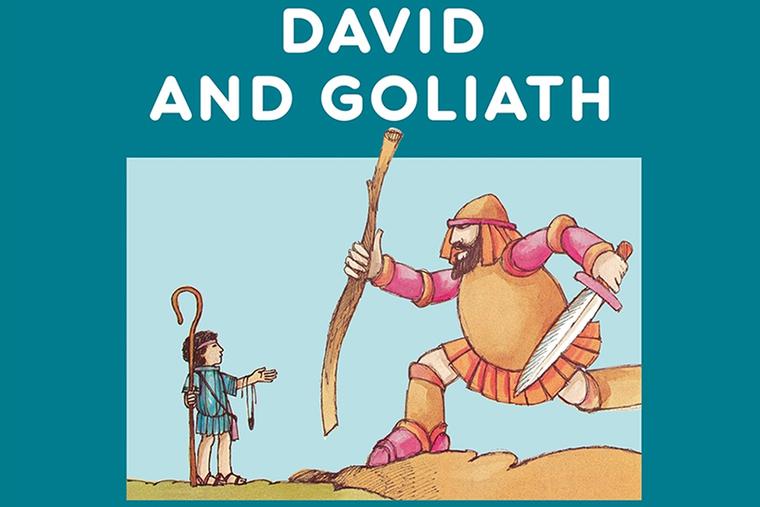 Why is it so important to include the fact that David cut off Goliath’s head?

A new children’s book from Ignatius Press (in partnership with Magnificat) stunned me recently.

I have a huge crush on Catholic children’s books. We have five children at the moment, all under the age of 9 at the time of writing this article. I consider them budding theologians, all of them. We often have discussions about Sunday readings, what they’ve heard on the radio, and what they might find in an episode of Pokémon. Young and homeschooled, they are very impressionable, and my wife and I make it our goal to help them. to understand the Bible and the Magisterium of the Church. Catholic children’s books are a constant resource for us.

The new book is a familiar story: David and Goliath by Tomie de Paola. It’s a facelift – a second edition of a 1984 version from Winston Press. I have a handful of other versions of this story. It is important for children to read from several points of view. David fills the minds of children with positive concepts like courage, trust and obedience to God. Children also learn important spiritual concepts such as God’s use of the weak to overcome the boastful, or similarly, how God confuses the wise with the humble (1 Corinthians 1:27). There is even a solid lesson in the triumph of humility over pride.

Christian families and CCD teachers have much to discuss despite the brevity of this story. But this new Catholic children’s book of the famous biblical passage about the future king of Israel and ancestor of Jesus, the king of the universe, contains a rather remarkable detail.

But before I reveal it – and I promise not to bait the reader – my mind immediately goes back to 2020 when Raymond Arroyo’s Christmas book, The Spider Who Saved Christmas, has been freed. His book includes a reference to the massacre of the Innocents – those baby boys, aged two and under, who were ordered to be killed by Herod for the purpose of killing Jesus.

There were many upset parents who would have liked to avoid telling their children about it, having to explain such a tragedy. But these parents should realize that this is the great and agonizing reality of the circumstances of Christ’s birth. This is a biblical fact that takes nothing away from the Nativity story, but reinforces it. It gives meaning, depth and veracity to the entire chronicle.

Just like this important detail in the story of David and Goliath. After the great build-up to the story and after the battle scene where David throws a river stone into the skull of the giant, boastful Philistine soldier, the children’s book notes that “David ran to Goliath and stood at- above him. So David took the giant’s sword and cut off Goliath’s head.

What an overwhelming detail to include in a children’s book! It doesn’t just say he cut his head off – the author and artist include a depiction of the scene!

Compare this with the story of the Little Golden Books of David and Goliath.

The great giant fell dead, face down. The frightened Philistine army turned and fled in panic.

So, long ago, the young shepherd boy David killed the great Goliath – with a slingshot and a stone and a mighty belief in God.

Tame, as you might expect. Even for adults, this seems like a strangely superfluous detail. But it’s right in the Bible:

And David reached into his sack, took out a stone, threw it with the slingshot, and struck the Philistine in the forehead; the stone sank into his forehead, and he fell face down. … Then David ran and stood over the Philistine, and took his sword and drew it from its scabbard, and slew him, and cut off his head with it (1 Samuel 17:49, 51).

What is the meaning of this? Why is it important that David cut off his head? And why should it be included in a children’s book?

First, that’s what David promised to do. For God’s 40 days of boasting and provocative ridicule, David declared in verse 46 that he will cut off his head (Deuteronomy 7). David keeps his promise.

Second, David wants to show both armies – neither of which likely has the guts to get too close to combat – that Goliath is really dead, not just knocked out.

But there is something more here, best expressed in David’s own words. He promises that by cutting off Goliath’s head, “all this congregation will know that the Lord does not save with sword and spear; for the battle is the Lord’s and he will deliver you into our hands” (47). Again, this recalls this Pauline passage:

Something else is also at play – a spiritually rich message found in a history lesson.

God had commanded God’s people to slaughter the Canaanites, to expel them completely from the Promised Land in Deuteronomy 7. He wanted his people to settle there. But why did they need to kill? God tells them that they will be deceived, that their sons and daughters will be turned away from the Lord to other gods. But the Israelites did not complete the mission. On occasion, they would act mercifully toward people like Rahab (Joshua 2). But on many other occasions their laziness and wandering from the commandments of God caused them great sorrow as they fell prey to deceit and participated in Baal worship.

It is a true story, but there is also a double meaning. God was at work revealing how much he desires holiness. If the people were to be in the new land, they would have to rid the land of all evil, of all foreign gods. In return, the people’s obedience was a sign that they kept their covenant (Deuteronomy 7:12).

This whole theme should sound familiar to you. Paul reminds us to be aware of our fight against the evils of this world, that our fight requires the armament of a warrior (Ephesians 6:10-17). God’s command for us is no different than that given in Deuteronomy 7 – to eradicate all evil from our lives, to have no other gods (1 Thessalonians 5:22). As a sign of our communion with him, Jesus also expects obedience: “If you love me, you will keep my commandments” (John 14:15).

We find more than a story of a brave shepherd boy in David and Goliath. When David took Goliath’s own sword and beheaded the giant, he was doing what many had not had the courage to do before: rooting out evil and removing it completely from the presence of God’s holy people. And God calls us to do the same with virtue, prayer, fasting and frequent participation in the sacraments. David taking the head of Goliath is a biblical fact that does not harm the story, but strengthens it. It gives meaning, depth and veracity to the entire chronicle.

My kids love this book. Ignatius Press says its new book is aimed at ages 3-5. I agree. But many adults – not just my budding theologians – should also contemplate history.

All urged to pray, work for ‘a post-Roe America’ that cherishes human life – Catholic Philly

Top 5 reasons to get a small loan – Daily News Hungary