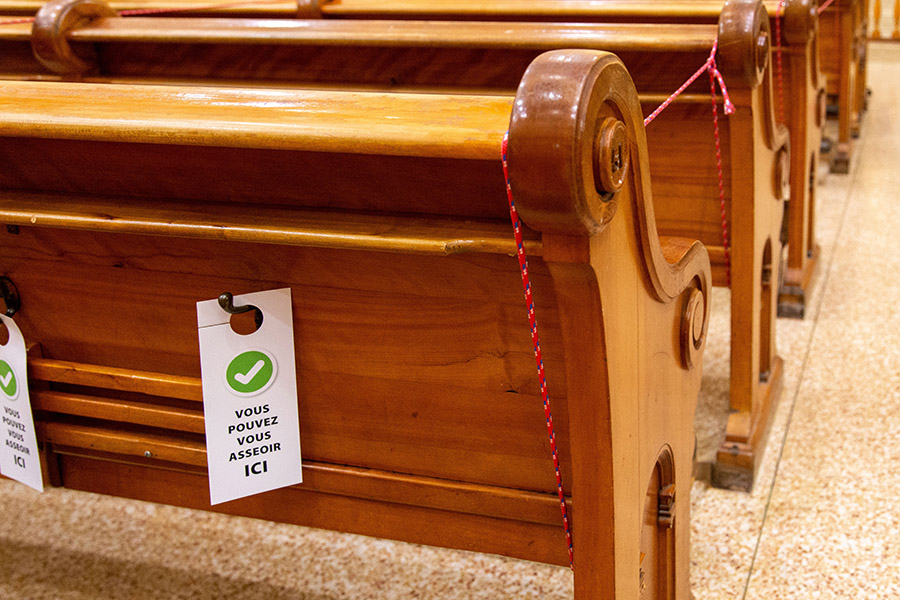 Tensions over vaccination mandates creep into the church

A parishioner at a church in Western Australia captured the moment police interrupted mass to demand that five people who were not wearing face masks comply with the law.

The woman who photographed the raid at St Bernadette’s Church in suburban Perth posted the photo on Facebook. It was featured in a Feb. 4 report by 7News.com, an Australian broadcaster, and it was viewed all over the world.

The scene resembled the moment London police halted a Good Friday service in 2021 after a complaint that COVID-19 regulations were not being followed, telling more than 130 worshipers the gathering was “unlawful” and the threatening fines and arrest if they did not return home.

Since then, the situation has changed dramatically in England with the last remaining pandemic restrictions – including social distancing and the compulsory wearing of masks in indoor public places – due to be removed by the end of February. There will be a full return to work, a free mix of children in schools without face masks, freedom to travel, no vaccination passports, no vaccination mandates and no requirement to self-isolate after a test positive for COVID-19.

The English bishops, in their latest guidance, have suggested that face masks ‘may continue’ to be worn by people in churches, if they wish, but the practice must continue in Wales and Scotland due of different government restrictions there.

Such progress has been possible in part due to the surge of the relatively mild but more infectious omicron variant of COVID-19 supplanting earlier, more deadly variants, and also due to the success of a mass vaccination program.

The idea that vaccination is the way out of the pandemic opens up new loopholes everywhere and in particular on the question of vaccination mandates, the obligation to be vaccinated to continue working or to access other freedoms.

The extent of Catholic support for the mandates has been demonstrated in particular by the Vatican, which declared on December 23 that all employees must be vaccinated against the coronavirus or show proof that they have recovered. It was a policy already in effect in some U.S. dioceses, such as Chicago, where in August Cardinal Blase J. Cupich introduced vaccination mandates for all archdiocesan employees and clergy, but not the laity.

When the omicron variant arrived in Europe, the bishops of Austria agreed to the imposition of a vaccination mandate if used “as a last resort”, and from February 1 the government made vaccination compulsory for all citizens over the age of 18.

In Australia, agencies such as Catholic Health Australia have gone further, leading calls for mandatory vaccination of health and residential care workers, while in New Zealand bishops have said they “believe that, on the whole, the introduction of vaccination mandates for certain sectors, as well as the use of vaccination certificates, are justified for the time being.

Churches in Australia are not among the public places where a vaccination passport – proof of vaccination – is required before a person can attend, and New Zealand operates a complex “traffic light” system, removing the freedoms of vaccinated and unvaccinated people to different extents depending on the severity and prevalence of a COVID-19 outbreak.

But in Canada, the Quebec government in February imposed a requirement for vaccine passports in churches, prompting bishops to say they were “deeply indisposed” by the measure and “deeply upset” by it, but would consent to it.

While agreeing with “the many believers” who believe that the vaccine passport is “an intolerable discrimination which deprives unvaccinated people of their right to religious freedom”, the bishops recalled that “Catholics have a duty to partner with all members of society to ensure the safety and health of all.

Singapore’s Catholic pastors have also been harmed by a government mandate requiring all people without a medical exemption over the age of 12 to be vaccinated before they can attend church. Some have called on authorities to make concessions to allow parishioners to worship in public regardless of their vaccination status.

In the United States, the Becket Fund for Religious Liberty and the Thomas More Society petitioned the Supreme Court in mid-February to block New York’s coronavirus vaccination mandate for healthcare workers and allow religious exemptions to the vaccination mandate.

Some Catholics oppose the use of COVID-19 vaccines because animal-phase testing for some vaccines used stem cells from aborted fetuses 50 years ago. The Congregation for the Doctrine of the Faith declared all vaccines morally licit in December 2020, and the Vatican recently updated its rules to require all its employees to be vaccinated against the virus or prove that they have recently recovered from the disease.

Pope Francis and retired Pope Benedict XVI have each received vaccinations, with Pope Francis urging Catholics to accept a shot as an “act of love”.

Church teaching, however, does not authorize coercive medication. In its 2020 document, the doctrinal congregation noted that a vaccine “is not, as a general rule, a moral obligation…and must be voluntary.”

David Jones, director of the Anscombe Bioethics Centre, an institute serving the Catholic Church in the United Kingdom and Ireland, told Catholic News Service on February 15 that it was unethical to try to impose a vaccination to someone who does not wish to have it.

“The need for informed consent is a fundamental principle of medical ethics,” he said. “There are Catholics of good conscience who argue that in the extreme circumstances of a pandemic it is legitimate to force people to get vaccinated. However, the view of the Anscombe Bioethics Center is that vaccination mandates are coercive and unfair.

“Mandates are also divisive,” he said. “Mandates undermine the sense of shared solidarity and can be counterproductive. They lead to resentment and can lead to other harms such as staff shortages.

Divisions within the Catholic Church are now beginning to express themselves in action, for example in the protests in Italy led by Father Emanuele Personeni, who began an anti-mandate pilgrimage across the country on February 11.

Bishop Francesco Beschi of Bergamo, his bishop, disapproved of his stance and suspended him, citing vaccination as a “moral obligation” and a “legal obligation” and banning parishes from hosting any of his speeches.

The mayor of Bergamo, a city ravaged by the pandemic, also urged Bishop Beschi to suspend Fathers Alessandro Nava and Andrea Testa, who joined Father Personeni in writing a brochure against forced vaccination last year.