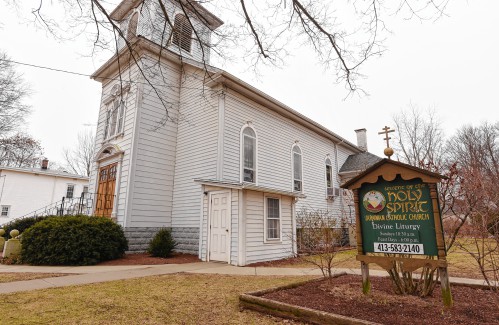 SOUTH DEERFIELD — As supplies from Ukraine dwindle in the face of the continued Russian invasion, Andriy Krip has spent the past few days packing boxes full of supplies as part of his church’s community giving campaign, which has already yielded dozens and dozens of shipments ready to be sent to the beleaguered nation.

“We think we have to do something here,” Krip said between tape tears. “It’s hard to sit down and watch what’s going on.”

Medical supplies the church is looking for include, but are not limited to, the following: first aid kits, tourniquets, bandages, petroleum jelly, burn gel, braces, tylenol, and ibuprofen. Non-medical supplies – which the church is asking to be separated from medical supplies – sought include foods like energy bars, crackers and pretzels, warm blankets, sleeping bags, socks, gloves, diapers, baby wipes and children’s clothing. Krip said churches do not accept adult clothing.

Items can be dropped off at the Descent of the Holy Spirit Ukrainian Catholic Church at 44 Sugarloaf St. in South Deerfield.

The church is also asking for monetary donations to offset high shipping costs. Checks can be mailed to 44 Sugarloaf St., South Deerfield, MA 01373 or deposited in the church drop box. Krip asks that people notify the church at 413-583-2140 if they mail or deposit a check in South Deerfield because he is only there on Sundays. Alternatively, checks can be mailed to Ludlow Parish at 45 Newbury St., Ludlow, MA 01056.

On Tuesday, Krip said churches had “nearly 100 boxes” of supplies ready to be shipped to western Ukraine, where they will be distributed to various local groups treating injuries.

Krip said it’s “difficult to say on the timeline” when it comes to the end of the donation campaign, because it all depends on what the two churches can afford.

“It all depends on how much they need there in Ukraine and what we are able to do here with shipping costs,” Krip explained. “That’s why we collect cash donations.”

Krip himself has several family members who still live in the town of Zhokva, a small town about 20 miles north of Lviv, which has become something of a supply hub for resources from Western allies entering Ukraine. .

“They’re alive, there’s no bombing going on at their place right now,” Krip said. “We call them every day to make sure everything is fine; they have enough to survive.

He said shelves are empty across Ukraine as the humanitarian crisis worsens and any form of aid, even if it doesn’t arrive in the country for several weeks, will be of great benefit to those who suffer.

“It’s a complicated thing, but we know the need will be there for a while, even if the war stops,” Krip said. “That’s what happens after the war.”

Under fire in Ballymacandy: How ‘The Troubles’ came to an Irish village