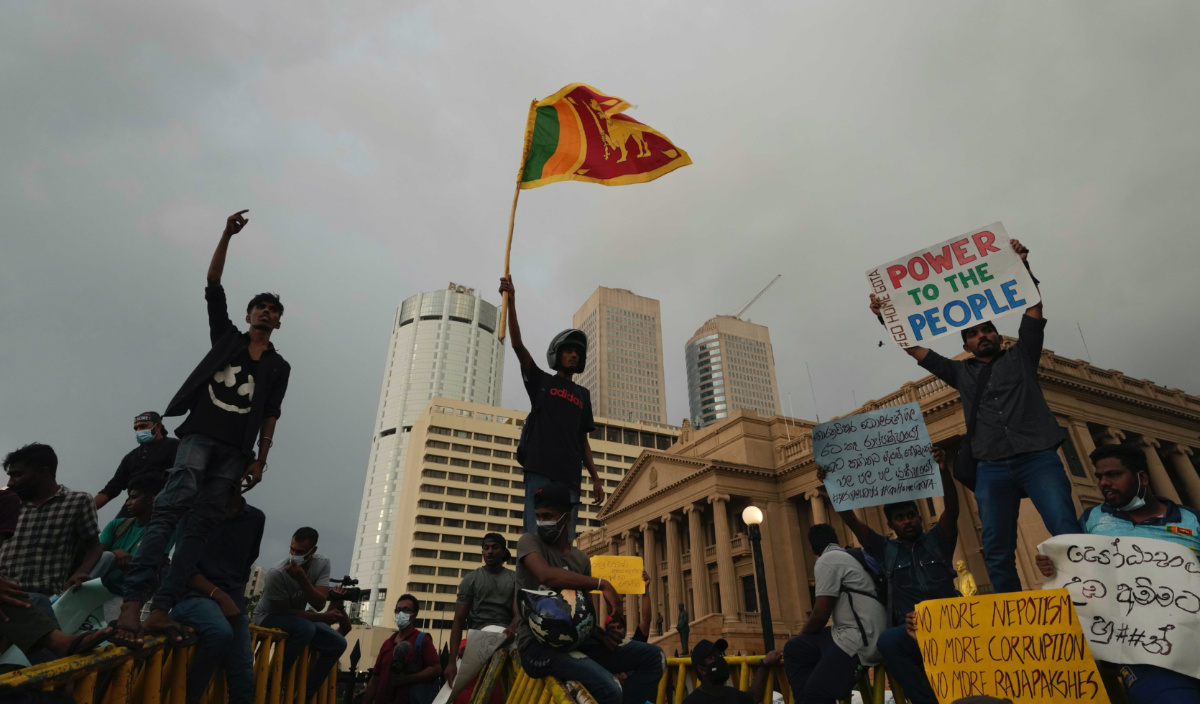 Thousands of Sri Lankans gathered in the country’s main business district and Christian clergy marched through the capital on Saturday to observe a day of protest calling on the country’s debt-ridden president to step down, amid anxiety and anger over shortages simmered.

Protesters carrying national flags and placards, some lamenting hardship through songs, accused President Gotabaya Rajapaksa and his administration of mishandling the crisis. He remained resolute in refusing to step down even after most of his cabinet resigned and loyal lawmakers rebelled, narrowing his path to finding a way out as his team prepares to negotiate with international lending institutions.

Sri Lankans demonstrate outside the president’s office in Colombo, Sri Lanka on Saturday, April 9. Thousands of Sri Lankans gathered in the country’s main business district to observe a day-long protest on Saturday calling on the country’s president to step down amid the worst economic crisis in history. PHOTO: AP Photo/Eranga Jayawardena.

The protest also included a large number of young people who had organized through social media and refused to accept any political leadership. Many carried signs saying “You got the wrong generation!”

Protesters remained around the president’s office and vowed not to leave until their mission was accomplished.

For months, Sri Lankans have lined up to buy fuel, cooking gas, food and medicine, most of which comes from abroad and is paid for in hard currency. The fuel shortage caused rolling power cuts lasting several hours a day.

The Indian Ocean island nation is on the brink of bankruptcy, struggling with $25 billion in external debt over the next five years – including nearly $7 billion due this year alone – and foreign exchange reserves falling. Talks with the International Monetary Fund are expected later this month, and the government has turned to China and India for emergency loans to buy food and fuel.

Much of the anger expressed by weeks of mounting protests has been directed at Rajapaksa and his older brother, Prime Minister Mahinda Rajapaksa, who lead an influential clan that has been in power for most of the past two decades. Five other family members are lawmakers, three of whom resigned as ministers last Sunday.

Thakshila Jayasinghe, a 35-year-old lawyer who joined the protest, said she felt sorry for voting for Rajapaksa in the 2019 presidential election. “I wonder what sin I committed by voting for this president as I watch the people suffer,” she said.

Reports say at least four elderly people have died while queuing for hours trying to buy cooking gas or kerosene.

Jayasinghe said she voted for Rajapaksa, believing he was the best candidate to restore national security after the 2019 Easter Sunday bombings that killed more than 260 people. The attacks, blamed on local Muslim militants linked to the Islamic State group, have also shattered the tourism industry, alongside the pandemic, depriving Sri Lanka of hard currency.

At the same time, critics accuse Rajapaksa of borrowing heavily to fund unprofitable projects, such as a port facility built with Chinese loans.

Sri Lankan Catholic priests demonstrate in Colombo, Sri Lanka on Saturday April 9. Christian clergy marched in the capital to observe a day of protest on Saturday calling on the country’s president to step down amid the worst economic crisis in history. PHOTO: AP Photo/Eranga Jayawardena.

Catholic clergy and lay people joined a rally from the ‘martyrs’ cemetery’ in Negombo, north of the capital Colombo, where more than 100 people who died in the suicide bombings at St. Sebastian’s Church are buried region.

They protested the economic crisis as well as the government’s alleged inability to uncover the conspirators behind the attacks.

“Today the country needs a major change and a fresh start,” Cardinal Malcolm Ranjith, Archbishop of Colombo, told protesters. “We are calling on all citizens of this country to come together and change this system. Get together and tell these people to leave.

“It’s enough now, enough to destroy the country, now go and hand it over to someone who can rule this country,” he said.

The demonstration then moved near the Anglican Cathedral in Colombo.

The Catholic Church in Sri Lanka has criticized the investigation into the bombings, citing allegations that some members of state intelligence units knew and had met at least one of the attackers.

Rajapaksa had earlier proposed the creation of a unity government after cabinet resignations, but the main opposition party rejected the idea. Parliament failed to reach a consensus on how to handle the crisis after nearly 40 ruling coalition lawmakers said they would no longer vote under the coalition’s instructions, significantly weakening the government.

With the opposition parties divided, they too were unable to show their majority and take control of parliament.