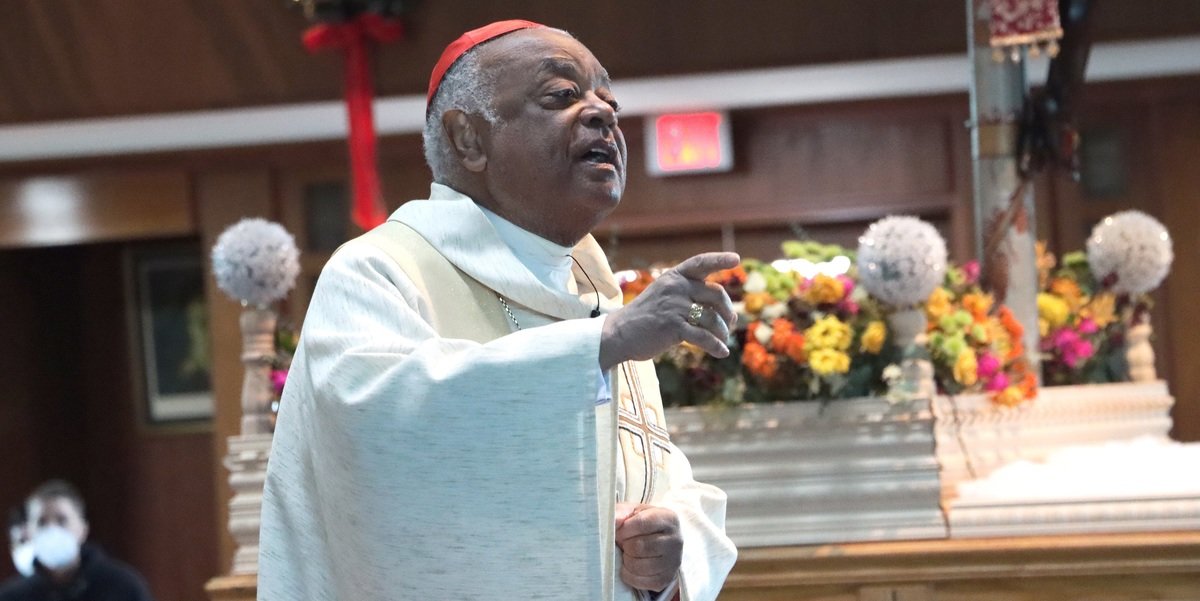 “It’s Catholic Schools Week, and I’m happy to start this week here at Don Bosco Cristo Rey,” the Cardinal said at the start of Mass at Our Lady of Sorrows Church in Takoma Park, Maryland, located next to the secondary school.

The congregation for the Mass included faculty and staff from the school and its nearly 400 students, who wore face masks in accordance with COVID-19 safety guidelines. Don Bosco Cristo Rey High School, which offers college-preparatory Catholic education and an innovative business work study program to students from low-income and primarily minority families in the Washington, D.C. area, is sponsored by the Roman Catholic Archdiocese of Washington and the Eastern Province of the Salesians of Don Bosco.

In the Business Studies program, students gain professional work experience at leading Washington-area companies and institutions and earn money to pay for a significant portion of their college tuition. Since Don Bosco Cristo Rey opened as the Archdiocese’s newest high school in 2007 and had its first class in 2011, all of its graduates have been accepted into the university, and many of them are the first members of their family to go to university. .

A large portrait of Saint John Bosco, the patron saint of youth, was placed in front of the lectern for the mass. In his homily, Cardinal Gregory said that this saint shows how everyone is called to live a holy life and become a saint.

“Today’s feast has something for everyone, especially everyone here at Don Bosco Cristo Rey, because Saint John Bosco believed everyone is called to holiness,” the cardinal said.

Saint John Bosco, an Italian priest canonized in 1934, was known as “Don”, the Italian word for “Father”, because he dedicated his life in the mid-1800s to providing a Catholic education for poor boys, inspired by the simple spirituality and spirit of benevolence taught by Saint Francis de Sales. Saint John Bosco created a religious order called the Society of Saint Francis de Sales, popularly known as the Salesians, the order that co-sponsors and assists the staff of Don Bosco Cristo Rey High School.

“Jean Bosco had this principle: everyone is called to be a saint. Young people, priests, religious, those who work with young people and of course the young people themselves, who are all loved by God,” Cardinal Gregory said.

The cardinal said the life of Saint John Bosco illustrated how Jesus described the Good Shepherd in the Gospel, being “faithful to the people he was called to serve”. This example, he said, should guide today’s bishops, priests, religious and educators and all who work with young people.

The Archbishop of Washington highlighted today’s Gospel reading from Matthew 18 – when Jesus said that people had to become like children to enter the kingdom of heaven, and whoever receives a child in his name, receives Jesus. “We hear Jesus describe the importance of young people, the centrality of young people,” the cardinal said, noting that Don Bosco’s life reflected this orientation.

“John Bosco spent his entire priesthood caring for young people, teaching them, helping them grow in holiness,” the Archbishop of Washington said, noting how the saint’s example helped one of his first pupils, Saint Dominic Savio, and collaborator of Don Bosco in young teachers, Saint Mary Mazzarello, may also be recognized as saints by the Catholic Church.

Saint Dominic was a student of Don Bosco’s boys’ oratory, known for his devotion to his faith and cheerful attitude and for creating a group that encouraged his fellow students to lead good and holy lives. As a result of an illness, he died in 1857 a few weeks before his 15and birthday. Saint Dominic Savio, the patron saint of altar boys, was canonized in 1954 and his feast day is May 6.

Sister Maria Domenca Mazzarello worked with Saint John Bosco to found the Daughters of Mary Help of Christians, known as the Salesian Sisters, to care for and educate poor girls, just as Don Bosco had educated poor boys. Saint Mary Mazzarello died in 1881 and was canonized in 1951. Her feast day is May 13.

Highlighting how Don Bosco’s legacy continues today, the Cardinal noted: “In a way, Don Bosco Cristo Rey High School continues the work that John Bosco himself started, even though he is dead. in Italy in Turin in 1888, he set such wonderful examples for young people, for priests, for religious, that even today his name is honored and venerated throughout the Church. Today we have nearly 16,000 Salesian priests, so many that it is one of the largest religious communities in the Church. So he (Don Bosco) had to be on something, to invite people to take care of young people, to instruct them, to educate them, to form them.

Just as Cardinal Gregory was about to finish his homily on Saint John Bosco, a shrill sound came over the PA system, and the Cardinal looked up and asked jokingly, “Is it you, John?

Then, after joining the congregation in a moment of laughter, the cardinal concluded his homily by saying that Don Bosco “calls us to holiness, each one of us, and I hope that we all listen and follow his example. Amen!”

Mass guests included Kelly Branaman, Secretary of Catholic Schools and Superintendent of Schools for the Archdiocese of Washington, and concelebrating priests included Fr Shaun Foggo, pastor of Our Lady of Sorrows, and Salesian Fr Dieunel Victor , the youth ministry coordinator.

After Communion, Father Victor thanked Cardinal Gregory for celebrating Mass and, echoing the message of the Cardinal’s homily, he added: “We are called to holiness. This is what we Salesians strive for.

In his closing prayer, Cardinal Gregory encouraged people to imitate Saint John Bosco “in leading young people to the love of Christ.”

After the recessionary hymn “Friend of the young and the poor” on the life and work of the saint, the director of the school, Elias Blanco, addressed the students saying: “Happy feast of Don Bosco! “

He noted that being a saint doesn’t mean you have to do extraordinary things. “We are called to be saints in small, ordinary things,” he said.

Blanco encouraged students to follow St. John Bosco’s formula for holiness, which he said was, “First, be happy. Second, study and pray. Third, do good to everyone.