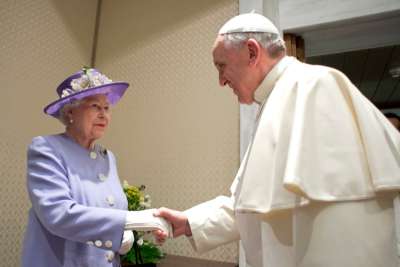 Queen Elizabeth was a bridge of reconciliation between Catholics and Protestants

“Billions of people now follow the teaching of Christ and find in him the light that guides their lives. I am one of them because the example of Christ helps me see the value of making small things with a lot of love, no matter who does them and what they themselves believe.”

She was known to millions as “The Queen”, as if she were the world’s only royal matriarch.

But Elizabeth Alexandra Mary Windsor Elizabeth II, “by the grace of God, of the United Kingdom of Great Britain and Northern Ireland and her other realms and territories Queen, Head of the Commonwealth, Defender of the Faith”, according to her official title, was no ordinary monarch living a jet-setting life in an era marked by the rise of celebrity culture.

Much has been written in the secular media about his service to his country, the Commonwealth and the world, but very little about his deeply held Christian values ​​which inspired his actions and guided his words.

She was one of the last generation of leaders in the Western world who not only publicly declared their Christian faith, but lived it, not by leading the faithful into battle, “but by doing small things with great love”. .

The “little things” she mentioned in her modest, self-deprecating way included acts of diplomacy that did much to bridge the rift between the Anglican and Catholic Churches that had plagued Britain and Ireland for centuries. Combining the roles of monarch and “defender of the (Anglican) faith in an unprecedented way, she becomes an ambassador of reconciliation.

When King Henry VIII broke with the Catholic Church in the 16th century and ordered the dissolution of Catholic monasteries, it caused a bitter division between Catholics and Protestants that had profound historical consequences.

Queen Elizabeth II, however, offered the olive branch and assumed the role of ambassador or reconciliation between the two denominations.

On November 30, 1995, she made history when she attended a Catholic service at Westminster Cathedral, even though a group of protesters mocked the Queen’s arrival and Protestant leader Michael Hobbis told her off. accused of “breaking (her) coronation vows”.

Cardinal Basil Hume, Catholic Archbishop of Westminster, said at the time: “In 1982 Your Majesty received Pope John Paul at your London home,” he said. “It was for us the healing of many old wounds and we were very grateful for it.

“The Queen’s presence was a further affirmation of the place we Catholics have in the nation,” he added.

In fact, she met five popes in her lifetime, starting with Pope Pius XII in 1951 when she was still a princess.

Pope Francis met the Queen and the Duke of Edinburgh at the Vatican in 2014, when the royal couple presented him with whiskey produced at Balmoral Castle in Scotland, where she spent her last days.

Nigel Baker, Britain’s Ambassador to the Holy See at the time, said: ‘If you look back in terms of the reign of Queen Elizabeth, it is extraordinary to see how the relationship between Britain Britain and the Holy See, and between the Anglican Church and the Catholic Church, has developed since 1952, when she became queen.

Queen Elizabeth has reached out to Ireland, another battleground between Catholics and Protestants.

“The Queen’s visit to Ireland has ended some of the old hatred, characterized by appalling acts of violence, and which has so disfigured Anglo-Irish relations,” wrote Lord David Alton (Member of the House of British lords) in a recent blog post. Publish. “My father and brothers all served in the British Armed Forces as wartime soldiers. My mother was of Irish mother tongue and came from a strongly nationalist Irish Republican home. While in the Commons, I served as spokesperson for Northern Ireland and Irish Affairs and knew that only the healing of history offered a prospect of reconciliation. The Queen clearly understood this and led by example.

The British parliamentarian was referring to the Queen’s four-day visit to Ireland in 2011 and her historic handshake at a charity event in Belfast in 2012 with IRA commander Martin McGuiness which made headlines newspapers around the world.

Following the 2012 meeting, McGuinness said he loved the Queen, adding the meeting had the potential to define “a new relationship between Britain and Ireland and between the people of Ireland themselves”. . In a speech at Westminster, he described the handshake as “the hand of friendship”.

Today, the world is in mourning for Queen Elizabeth II, “Defender of the Faith”.

Pope Francis reflected the feelings of millions of people around the world in his message of condolence to his son and successor, soon to be crowned King Charles III:

“Deeply saddened to learn of the death of Her Majesty Queen Elizabeth II, I offer my sincere condolences to Your Majesty, the members of the Royal Family, the people of the United Kingdom and the Commonwealth. I gladly join all who mourn her loss in praying for the eternal rest of the late Queen and paying tribute to her life of unswerving service for the good of the nation and the Commonwealth, her example of devotion to duty, her testimony unwavering faith in Jesus Christ and firm hope in his promises.