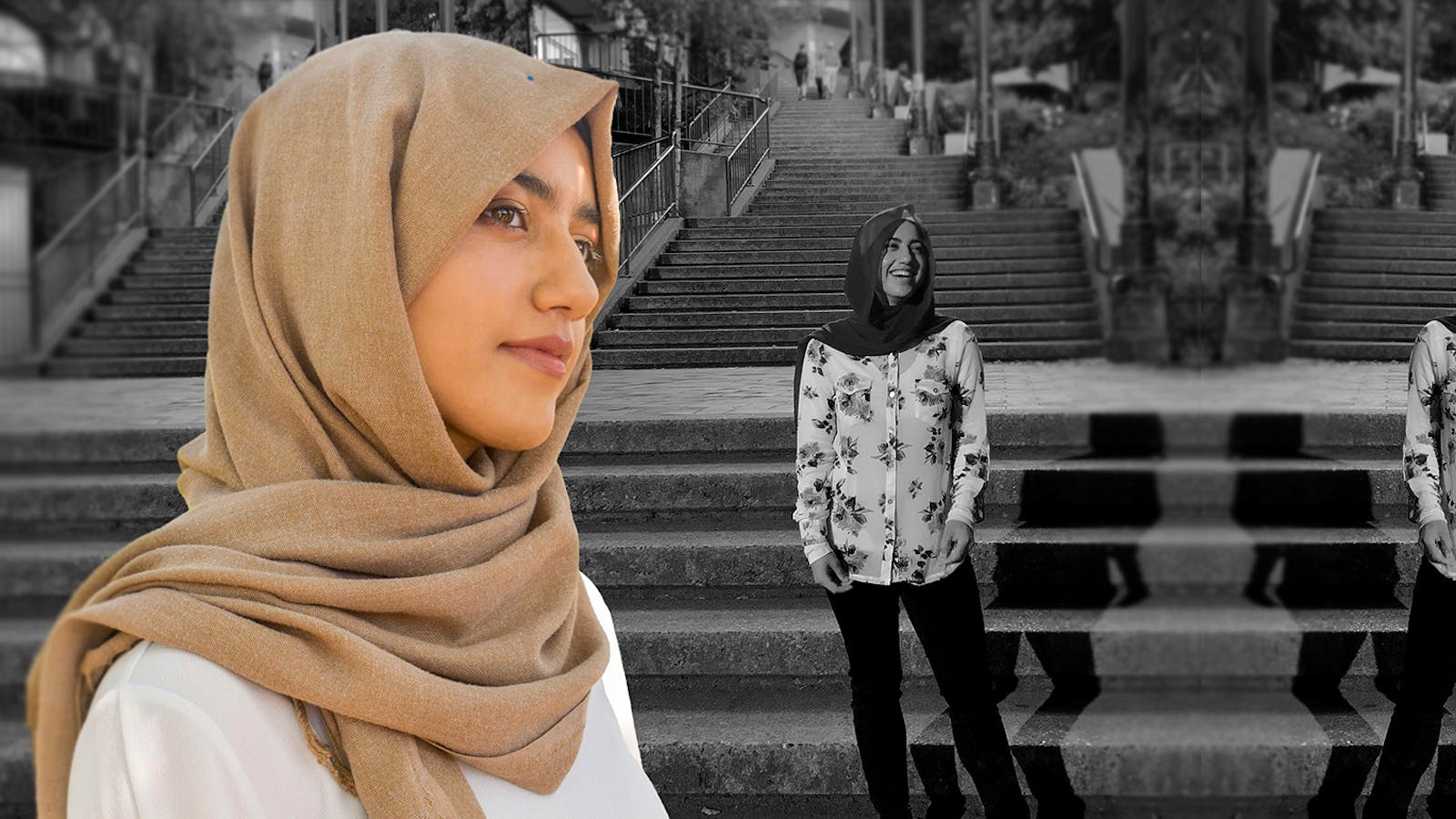 Q&A: The Unifying Factor, on practicing a minority religion at ASU

Hajer Rahi is a junior studying Molecular Biosciences and Biotechnology as well as Anthropology at ASU. She is also a first generation Iraqi American Shia Muslim. As a child, she attended small Islamic or Muslim-friendly schools in the Phoenix metro area. Today she is ASU Muslim Student Association Outreach Director.

December 8, 2021 an individual unaffiliated with ASU entered the Hayden Library Interfaith Reflection Room and vandalized a Quran, in what several student organizations and the ASU Police Department declared a hate crime. References Rahee this incident during the conversation.

Rahee does not speak for all Muslim students and is often quick to point this out. Her thoughts, ideas and stories reflect the unique experiences of one person: herself.

How was your faith important in your upbringing and now in your adult life?

I come from a strictly Muslim background with mostly Muslim friends. Going to ASU was this big change for the majority of my peers to be non-Muslim. You walk into your normal “general chemistry” class – about 200 students – and you look around and see, maybe five people wearing the headscarf.

Now my perspective has definitely changed. I did more to get out of my way and learn more about others. I don’t think my faith should restrict me or be that alienating factor between me and others.

During the first year there was this girl, we started to become friends. We were just talking about our days and so on.

Once I mentioned I was going to a mosque and she replied, “What is that?”

It was interesting to see that there was someone who did not know what the Islamic place of worship is. I thought if I mentioned the church, everybody would know what it is. But a mosque was kind of a foreign terminology for her.

Another time, my classmates and I would all take turns meeting a teacher and reviewing our exams with him. My Muslim friend went to see him after me another day, and the teacher said, “Haven’t I talked to you already?” He had never spoken to her before.

There is a kind of generalization about who Muslims are.

Wearing a headscarf is another alienating factor. Obviously, I can’t speak for the whole faith, but as a Muslim woman, when I walk into a room, people immediately assume, “Oh, she’s a Muslim. When this happens, they might immediately think, “Woah, how do you approach this person?”

Do you feel like you are visible in a way that other students are not?

Absoutely. I wouldn’t say it’s a huge, exceptional factor. I think there are enough Muslims that it’s sort of accepted.

But when it comes to talking to people, I can see they’re struggling to figure out how to approach us. People are afraid to say something or do something that offends us, so they are very careful. Then, afterwards, it becomes awkward.

Do you feel like this happens with your peers in the classrooms? Does this happen to teachers, administrators, even strangers on the street?

This mostly happens between peers. Talking to people who are in the same class as you, I think is the most intimate level of meeting people.

Once I was studying with a friend of mine, he is not a Muslim. He was asking questions about my faith. It seemed clear that this was the first time he had spoken up close to someone who practices Islam.

He asked, “So, was the scarf forced on you?” I was like “No, I chose to wear it” and I told him how I started wearing it.

I was quite shocked to be asked this question. I was expecting there to be a general sensibility around this, but I think that’s not really the case.

So is this an example of the opposite kind of thing, someone who is not sensitive at all? While other times people are too sensitive?

The thing is, I don’t mean he meant to be offensive, but I think he was the one who wasn’t really sensitive to the subject. If you want to be careful how you phrase something, you change the terminology you use.

Another time with another person, we were talking and – unprovoked – they were like, “Doesn’t your guys’ book say you should kill all the infidels?”

I mean, I don’t even know what to say. I don’t think you should ask me about that kind of stuff. I’m not really super educated on it.

There is certainly a spectrum of how people react when meeting a peer who is Muslim.

How does that make you feel? What does it mean that someone feels comfortable asking you incredibly insensitive questions about religious scripture?

It’s really me, but it makes me laugh.

It’s funny to me how sometimes people aren’t willing to go out of their way to find out more about others. Sometimes they just say what they have already heard. I’m glad I was able to dispel some misconceptions about Muslims to these people.

There is this gap in mutual understanding in terms of how Muslims and non-Muslims act.

I wish they knew we’re just like them, you know? I’m not a completely different entity or anything like that.

I’m not do not accessible just because I wear a hijab. There’s the fear of offending us, but there’s also the fear that maybe we’ll do something to them because of the previous media portrayal and so on.

I think that’s why when people asked me shocking questions, I didn’t get angry. Somehow they’re asking me for something that’s not really alienating.

They phrased it in a way that makes it sound like an everyday question. Yeah, that was insensitive, but it made me laugh that this person didn’t feel the need to be sensitive.

I’m not saying everyone shouldn’t be sensitive, but I wish people weren’t scared.

People who practice Islam are an incredibly diverse group. Do you think there are aspects of your identity that make your experience different from that of another Muslim person?

I certainly have a lot of privileges from my past. I am Arab; Islam was brought back to the Arabs and then spread. So there is this Arab superiority complex within the community.

At least within the Muslim community I would say I have an easier time getting by…than a brown, Desi or black person. I think there’s a lot of discrimination and racism that black people have to deal with within their own communities, especially religious communities. I definitely recognize that I have a lot of privileges.

What are some of the benefits of being part of the Muslim community at ASU?

I feel like if I ever went through something – let’s say I fell in front of a group of people – I feel like if a Muslim saw me they would immediately come running. If my scarf fell off they would drop what they were doing and come help me.

We have this tacit solidarity. We all make sure to look out for each other.

Practicing a minority religion is something that gives me a chance to be more open-minded. I kind of experienced the short side of the stick compared to other people.

Also, the school of thought that I practice is even more of a minority within the Muslim community. I am a Shia Muslim. It gave me the opportunity to really empathize with those who don’t have the same level of representation as non-minority groups on campus.

When you are on the ASU campus, do you feel safe?

I would say yes.

I don’t know if I’m saying this is also really naive. I’ve had people tell me to pay more attention to my surroundings. I’m someone who doesn’t really pay attention to that sort of thing. But, in general, I don’t feel like my life is in danger. I would say that I feel safe.

There has been a lot more effort, and I’m talking about the student body. I think there has been more solidarity between student groups to protect those who have already suffered from hate crimes or things like that.

Do you think the ASU administration makes the needs of Muslim students a priority?

I don’t think they make Muslim students a priority. In general, minority groups on campus are not given priority.

I’m sure you’ve heard of what happened in the interfaith hall. There is a person who came in, tore up a Quran and destroyed the walls and so on. We found out he wasn’t an ASU student, he was just someone who entered the building and wanted to vandalize.

I think that despite the fact that ASU is an open campus, there should be more effort to secure the buildings. Anyone can enter a building at any time, unless it is locked.

So, do you feel that ASU is not doing a good job managing its safe spaces – religious spaces, sacred spaces?

I don’t think I would go so far as to say they don’t do a good job. It’s just that there could be extra steps to really secure them.

After finding out that this person was not a student, people were really worried. It made me realize how easily anyone can enter a classroom or other building.

Is there anything else you want to talk about that I haven’t asked you?

If I have to mention anything, it’s just that I want to emphasize the need for both sides to come together and bridge this gap between us.

As long as we assume things on the other side, we won’t get anywhere.

This interview has been edited for length and clarity.

Continue to support student journalism and donate to The State Press today.

OFFICIAL OBSERVATION OF LENT AND EASTER 2022