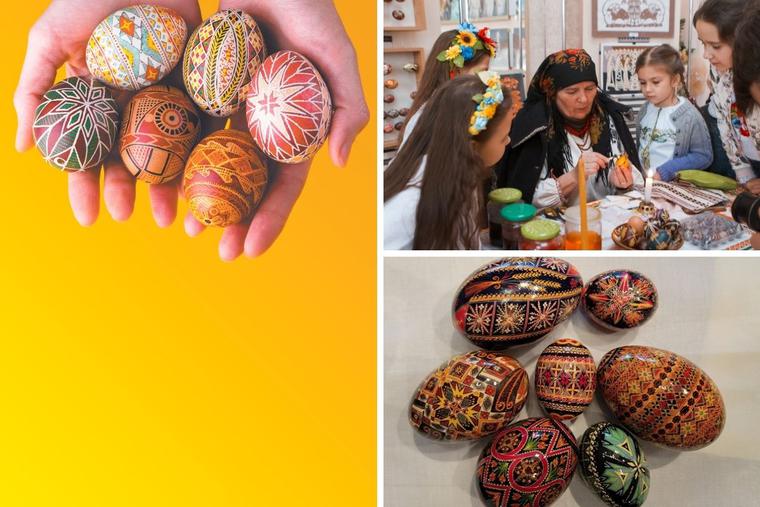 Colorful Easter eggs delight the eyes and contribute to the joy of the Easter celebration. Eggs that immediately amaze people are a Ukrainian tradition called pysanky. These amazing inedible multicolored eggs are decorated with intricate designs of geometric patterns and symbolic figures in yellows, reds, greens, blues – an artistic range of colors. Chicken eggs are not the only “canvas” for pysanky.

Father Paul Luniw, pastor of St. Michael’s Ukrainian Catholic Church in Terryville, Connecticut, who has made hundreds of pysanky, also uses ostrich, rhea, goose, duck and quail eggs. He learned the art from his mother and is an internationally recognized master of pysanky who has shared his expertise everywhere from global and national media to art teaching workshops. He presented a pysanka (singular) to Pope Francis, explaining the process.

“The pysanky really started in pre-Christian times and was more of a pagan tradition,” Fr. Luniw told the Register, giving a brief history. “It goes back to the Neolithic era of agricultural society,” he said, adding that “Ukraine is the breadbasket of Europe.”

Then came 988 and the conversion of the population. “With the dawn of Christianity, the pysanky took on a new meaning. A new life. A life in Christ,” Fr. Luniw explained.

Among geometric designs, triangles once represented the elements of water, fire and air. Now they symbolize the Holy Trinity. The cross that once represented the rising sun has become the symbol of the risen Christ. Wheat symbolizing the staff of life has also taken on Christian significance. “Bread in the Old Testament is manna; in the New Testament, Christ is the bread of life,” Fr. Luniw added. Easter has been associated with this art because centuries ago pysanky were linked to the coming of spring – “but with the dawn of Christianity”, Fr. Luniw said, the link was with “Christ dying on the cross and the resurrection of Our Lord”.

Archbishop Borys Gudziak, Metropolitan of the Ukrainian Catholic Archeparchy of Philadelphia, said in a video that “pre-Christian symbols and such have become associated with Easter, which is a matter of life and death.” the pysanka himself combines the power and beauty of the symbol, “but also the great fragility and delicacy of our life. It reflects the fragility that can lead to our death, but it is actually a sign of new life – an egg is something that you know new life is emerging from.

Christianity in Ukraine has also sparked interesting legends related to pysanky. Father Luniw shared one: “For example, the first egg created was created by the Blessed Virgin Mary through her tears. The legend says that when Pilate was trying on Jesus, she went with an apron full of eggs to Pilate, and when her tears fell on the eggs, they colored the first eggs. It was a miraculous event and symbolizes the tears of the Blessed Virgin Mary to this day, as she pleaded for the life of her son.

In a video conference, professional artist Sofika Zielyk, who focuses on pysanky, explained another caption of the incident, which includes the tears of the Crossed Virgin Mary falling “down her cheeks onto the bright red eggs creating beautiful designs”. Red was one of the first colors used for eggs. Simple geometric figures on pysanky are often filled with symbols and numbers. Adjusting this design grandly, Father Luniw meticulously placed on an ostrich egg, all by freehand, 40 symbols for the 40 days of Lent. Another image could be a dove symbolizing peace.

Pysanki are like distant cousins ​​of icons, since they are considered “written”, not simply decorated. The word derives from the Ukrainian verb pysate, meaning “to write”, because the designs are not painted but written or inscribed using beeswax. Father Luniw explained the process. A stylus called cystka is warmed in a flame and then dipped in beeswax to make patterns on the egg. With each change of pattern and color, the egg is dipped in the dye and the part covered with beeswax is preserved.

Designs may require multiple layers. “You always go from the lighter color to the darker color,” he said.

If more than one color is used, this means starting with yellow, then green, orange, red and royal blue or black, each of which can have its own symbolic meaning. When the whole egg is covered in wax, the wax is melted to reveal the beauty of the pysanky pattern. And, through a tiny hole, the egg is emptied of its contents, either before or after being decorated. Father Luniw said the eggs, if kept out of direct sunlight, “will last forever”.

A fitting symbol for the Resurrection, indeed.