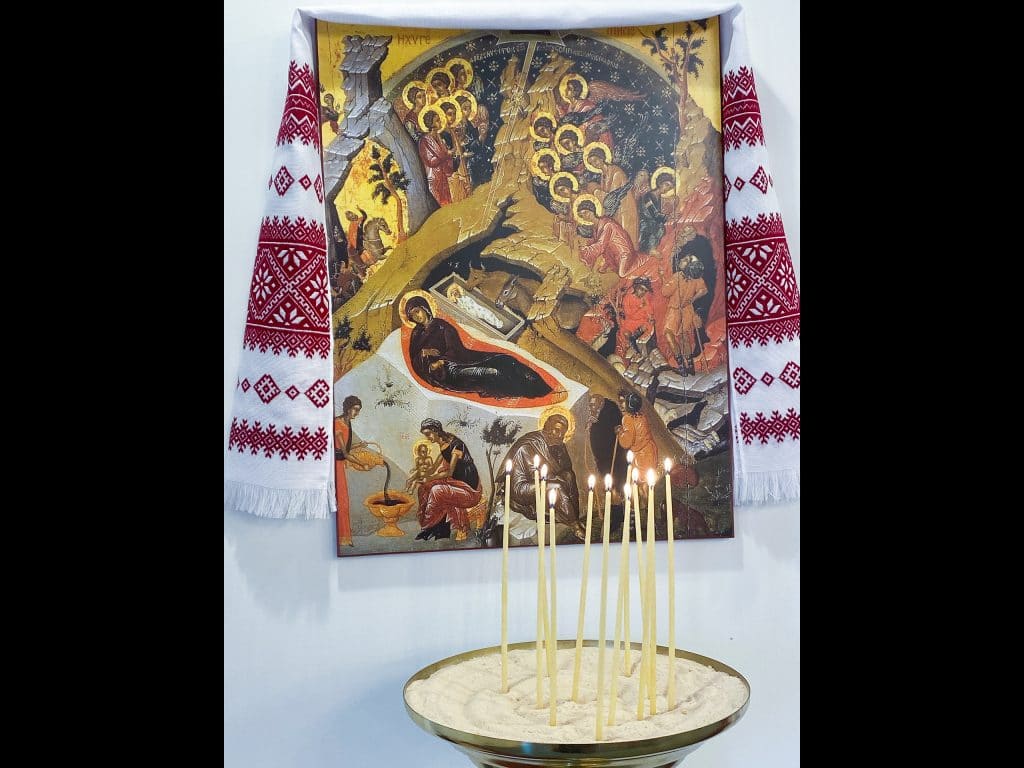 Prayers for peace in Ukraine poured in from weekend Masses across Virginia, but for about 100 Catholics at a Front Royal church on March 20, the petitions were particularly personal and fervent. In Sts. Joachim and Anna Ukrainian Catholic Church, you may be steps away from someone who was born in Ukraine, worked there, or can trace their lineage to those resisting Russian bombing and aggression today .

Since the start of the war on February 24, the parish has seen an increase in the number of visitors and an increase in offers to help affected Ukrainians, according to congregants and clergy.

“The generosity of people, whether Catholic or not, has been absolutely incredible,” said Reverend Father Robert Hitchens. “It really gave an opportunity for Christians to practice what we are supposed to do – take care of our sisters and brothers.”

Father Hitchens and another priest from the Ukrainian Catholic National Shrine of the Holy Family in Washington, Father Wasyl Kharuk, alternate weekends at the Front Royal Church.

Bob Weisner, a founding parishioner, said they regularly respond to calls offering a vacant room or an in-laws apartment for shelter and other assistance to any displaced Ukrainians who arrive here. “The people making these offers aren’t necessarily Catholic either,” he said. Calls grew after Virginia Gov. Glenn Youngkin’s Feb. 27 visit was covered by local media. The church has partnered with the shrine and others to raise nearly $100,000 to support Caritas Ukraine’s food and humanitarian aid for scattered war victims in Poland and elsewhere.

In the Ukrainian Catholic Church, the third Sunday of Lent, called the Great Fast, is considered the middle of the season and dedicated to the veneration of the Holy Cross. The liturgy is marked by the refrain of “At your cross, O Master, we prostrate ourselves in veneration and we glorify your holy resurrection”. It is a sign both of what is to come (the Passion) and also a sign of Christ’s ultimate victory over sin and death, Father Hitchens said.

He noted in his homily that this year comes at a difficult time, with the continued attacks on Ukraine. While this may make some wonder about the impact of prayer, he said their prayers are being heard as evidenced by the awareness of the Front Royal church and those around the world.

“There is a conversion of hearts taking place so we need to intensify our prayers and actions during this time,” Fr. Hitchens said. “May we all intensify our commitments to live our Christian values ​​and the promises we made in Holy Baptism.”

Parishioner Ivanna Richardson was born in Ukraine and has extended family there. When her daughters recently wired money to help their cousins ​​in Ukraine, local banks were running out of change to distribute it. Although she has lived in the United States for decades, she can still recite the Our Father and Hail Mary in her native language. “It makes me feel at home,” she said of her visit to the parish.

The establishment of Sts. Joachim and Anna Church helped, with family ties, lure Teresa Fedoryka to the Philadelphia area. She worked in Ukraine from 1992 to 1995 as part of a humanitarian relief effort after the fall of the Soviet Union. Recently, she reconnected via social media with friends in Europe offering to house those fleeing violence. She helped translate a new website designed to reach them. Two weeks ago, her friend in France helped welcome 100 refugees.

The Ukrainian Catholic Church is one of 23 Eastern Churches and follows the Byzantine liturgy, written by Saint John Chrysostom, Archbishop of Constantinople, in the 5th century. These Eastern churches are in communion with the Vatican in a relationship that has grown stronger over the centuries. During his pontificate, Saint John Paul II emphasized the importance of the Church breathing with “both lungs” – East and West.

While Catholics are united in doctrine, there are differences in the celebration of faith. The Mass is instead called Divine Liturgy and punctuated with acapella chanting and movement throughout the church during the service. A screen, or iconostasis, decorated with icons of saints, separates the altar from the pews. It symbolizes the meeting of heaven and earth in the church. Three doors allow the priest and altar servers to come and go. There are no knees; worshipers show reverence by frequent, deep bows, or metanies, and the eastern version of the sign of the cross.

To perform it, the thumb and the first two fingers of the right hand are joined in a point representing the Holy Trinity, while the last two fingers remain flat against the palm, symbolizing the two natures of Christ, human and divine. Then the hand rises to touch the forehead (“In the name of the Father”), descends to the bottom of the chest (“and of the Son”) and touches each shoulder, starting from the right (“and of the Holy Spirit”) ) rather than the left.

The church was established in 2015 in response to a call from Weisner and several other Catholics for more convenient access to Eastern worship. Previously, attending this particular liturgy required a trip to the Washington Shrine that could exceed three hours round trip from Front Royal.

For several years, the parish met for worship in a Human Life International chapel, until the social distancing requirements of the pandemic forced them out. In late 2020, Father Hitchens purchased a former Pentecostal church which became the parish’s new home. In December, the addition of another priest allowed the church to move weekend liturgies from Saturday to Sunday, with confessions available in advance. Now the church is open daily from 9 a.m. to 6 p.m., to accommodate increased interest from Catholics and the wider community who want to come and pray during the week.

“Even though Ukraine is such a remote place and a lot of people may not have known about it before, they really are just like everyone else in Virginia and the Diocese of Arlington,” Fr. Hitchens said. “They want to raise their families, see their children go to school, have grandchildren one day and live in freedom.”