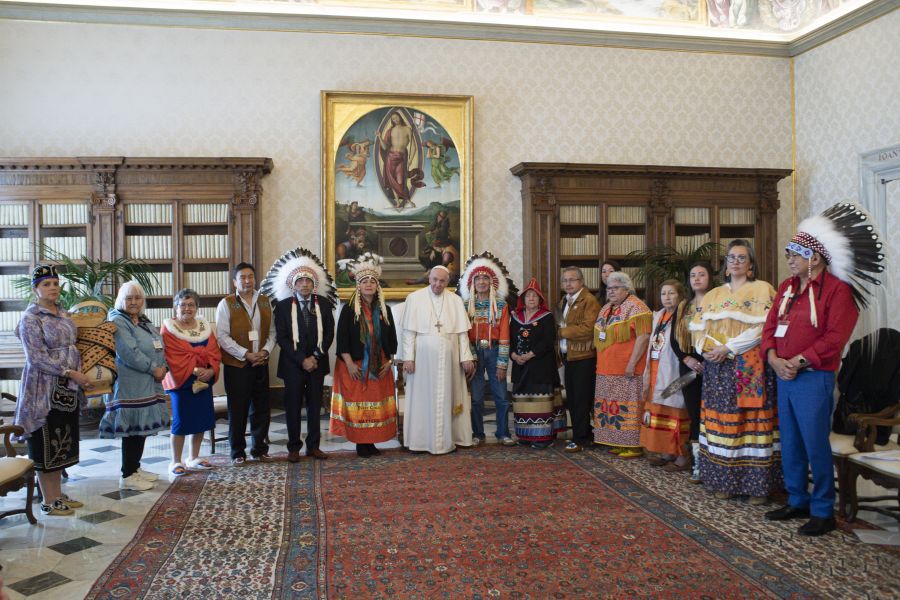 Pope Francis says he plans to visit Canada during the summer month of July, marking the feast of Saint Anne.

VATICAN CITY — Pope Francis has said he will visit Canada this summer, possibly for Saint Anne’s Day on July 26.

He made the announcement during a meeting with Canadian Indigenous leaders at the Vatican on April 1.

“You have brought the living meaning of your communities here to Rome,” the Pope said. “I will be happy to take advantage of meeting you again by visiting your native lands, where your families live.”

“I will not come to you in winter,” he said, adding “see you soon in Canada, where I can better express my closeness to you.”

The Vatican has yet to confirm a papal trip to Canada, although Canadian bishops said last year they would welcome his visit as a “pilgrimage of healing and reconciliation.”

Pope Francis said: “It rejoices me, for example, to think of the veneration that has spread among many of you for Saint Anne, the grandmother of Jesus. This year I would like to be with you during these days.

The papal audience marked the conclusion of a week-long visit by Métis, Inuit and First Nations representatives to the Vatican. During the week, Pope Francis held private meetings with each group.

The Vatican visit was first scheduled for 2020, then postponed following outrage in 2021 over the reported discovery of unmarked graves at the site of former boarding schools in Canada.

While in Canada, Francis is expected to apologize on behalf of the Catholic Church for the abuses committed against Indigenous students in Catholic boarding schools.

Members of the Métis and Inuit peoples told reporters March 28 that an apology from Pope Francis in Canada would be very meaningful.

Canadian bishops, who traveled with Indigenous delegations, described meetings with Pope Francis as “a time of listening” and thanked delegates, who included former students of Canadian residential schools, for their kindness and honesty with the pope.

Some 150,000 children attended residential schools in the roughly 100 years they operated. The schools, many of which are run by Catholic institutions, were a government-led program to suppress the native language and cultural practices of indigenous peoples.

In the 1980s, former students began to reveal some of the abuse they faced in schools, including physical, mental and sexual abuse.