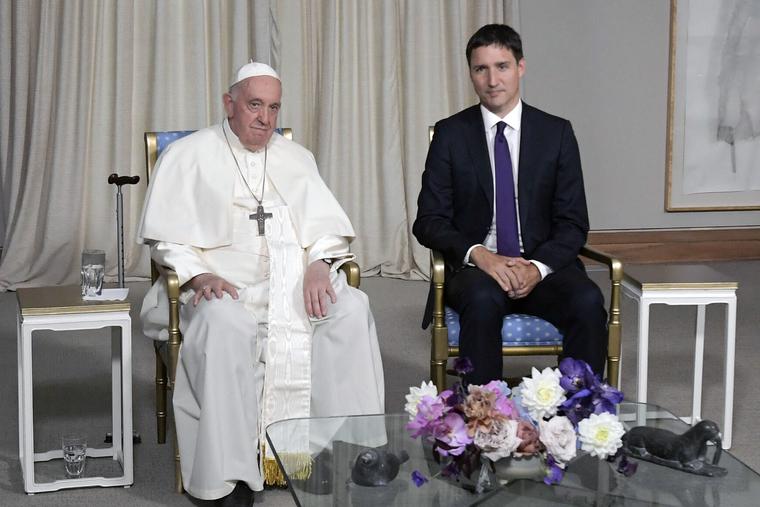 COMMENT: The Holy Father has declared that the Church must avoid collaborating with the power of the State, which seeks to destroy “the natural attachment of peoples to their values”.

To what extent should the Church, in obedience to the mission entrusted to her to make disciples of all nations, cooperate with state power to this end?

As Pope Francis’ visit to Canada continues, with his heartfelt apologies to Indigenous peoples for the Church’s operation of residential schools generally well received, some of the discussion turned to the larger issue of the presence of the Church in this very hemisphere.

A protest banner briefly unfurled during the papal mass in Ste. Anne de Beaupré, Thursday — “Abrogate the Doctrine” — referred to the 15th-century origins of European presence in the Americas. The Catholic Church left behind what is called the “doctrine of discovery” in 1537, and this requires a separate analysis. However, the larger question of the very presence of the Church in the Americas remains.

Some of the discordant notes issued this week were, in essence, about this issue. Pope Francis has set a milestone, contrary to the recent posture of local Churches in Canada, by defending the presence of the first missionaries and their contribution to the preservation and enrichment of Aboriginal cultures.

On the specific issue of boarding schools for indigenous children, the Holy Father also insisted that the crucial issue was the cooperation of the Church with the power of the State:

[In] In this deplorable system, promoted by the government authorities of the time, which separated many children from their families, various local Catholic institutions had their part.

These Catholic institutions probably thought they were fulfilling the mission of the Church to preach the gospel. Yet cooperation with state power made, as Pope Francis put it, the “global effects…catastrophic.”

The Holy Father then linked the “colonial mentality” of the past to new forms of “ideological colonization” – a practice of which the Trudeau government in Canada and the Biden administration in the United States are the main exponents. Pope Francis addressed these words to Prime Minister Justin Trudeau:

In the past, the colonialist mentality did not take into account the concrete life of the people and imposed certain predetermined cultural models; but today too, many forms of ideological colonization collide with the reality of life, stifle the natural attachment of peoples to their values ​​and attempt to uproot their traditions, their history and their religious ties. This The mentality, presumptuously thinking that the dark pages of history have been left behind, opens up to the “cancel culture” that would judge the past solely on the basis of certain contemporary categories.

The Church must also be careful today in collaborating with the power of the State which seeks to destroy “the natural attachment of peoples to their values”. This may be the case, for example, by endorsing environmental and climate change initiatives that view the poor as a problem to be eliminated.

Who could Pope Francis have been thinking of when he spoke of “cancelling culture”?

In Canada, the first prime minister, Sir John A. Macdonald, was “cancelled” in some significant places for his government’s role in creating the residential school system. But it is much more likely that the Holy Father thought of Saint Junípero Serra, whom he canonized in 2015 during his trip to Washington.

Shortly after his election as pope, Francis decided to shine a light on the work of leading Catholic missionaries whose canonization causes had stalled. Employing a unilateral exercise of papal authority, he decided to canonize José de Anchieta of Brazil and Junipero Serra of California, respectively Spanish Jesuits and Franciscan missionaries, as well as Joseph Vaz, the missionary from Goa to Sri Lanka. In addition, it included two Blesseds from 17th century Quebec, François-Xavier de Laval and Marie de l’Incarnation.

Pope Francis evoked the example of Saint Francis when addressing Canadian bishops on Thursday before venerating his tomb at Notre-Dame Cathedral in Quebec. Saint Francis, like his namesake Saint Francis Xavier, arrived in mission lands as part of a colonial expansion, the first under the French crown, the second under the Portuguese.

Saint Francis, however, was able to criticize these same colonial authorities when they gave counter-witness to the Gospel, especially in regard to the indigenous peoples.

“Let us recover the missionary zeal of your first bishop, Saint François de Laval, who rose up against those who belittled the natives by encouraging them to drink strong drinks and then deceiving them,” Pope Francis reminded his listeners.

There were a few Catholic voices who opposed the state plan for residential schools, but they were a small minority. Too few had the courage and wisdom of Saint Francis. Most Catholic institutions followed government policy and now, so many years later, a bitter harvest is still in progress.

The option of evangelism alongside state power is not available today as it was in the Americas centuries ago. The Church, for her part in Vatican II and in the encyclical on the mission of Saint John Paul II, Redemptoris Missio, is committed to proposing in complete freedom, and not to imposing by state power, the Gospel. Yet this earlier entanglement, and now this disentanglement, includes painful episodes of history.

This is the deeper context of what is unfolding in Canada this week, and why the papal visit is of interest across the Americas and beyond.