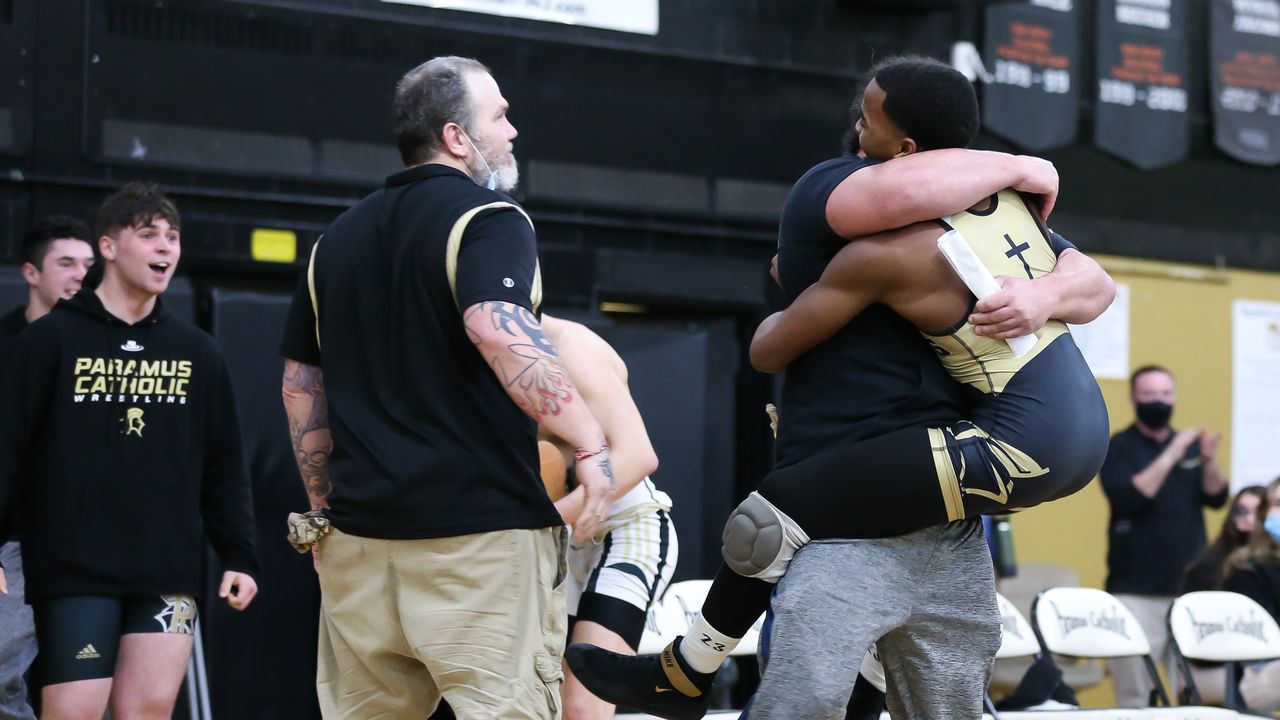 No one could say for sure if it was the best night in the history of Paramus Catholic’s wrestling program.

But all things considered, it was certainly like that.

In a win-win final bout, second Dan Rella sent the crowd into a frenzy when he prevailed with a 4-1 decision over Max Nevlin at 157 pounds. The victory pushed Paramus Catholic to a 33-29 victory over St. Peter’s Prep in what could be the first state tournament victory in school history and almost certainly the first with two teams standing. battling for a spot in the top five of the state rankings.

With the win over No. 7 St. Peter’s Prep, fifth-ranked Paramus Catholic will now face top-ranked Delbarton in the NJSIAA/Rothman Orthopedics North Jersey, Non-Public A semifinals on Wednesday in Morristown.

“We said we were going to war today,” Paramus Catholic coach Jon Piela said. “Every guy had a battle. Win, lose or draw, each of my children did their best. That’s all you can ask for as a coach.

Rella’s last fight victory capped a three-fight winning streak to close the match for Paramus Catholic. Freshman Zach Ballante took a 2-1 decision over Angelo Pellicci at 144. Then freshman Kaleb Jackson took the stunner out of the game when he won by pinfall against a Patrick Groo in the first period.

Jackson, who spent most of the season behind Ballante and Rella in the roster, shone in the season’s biggest moment. Another of Paramus Catholic’s announced middleweights, Kostantinos Mavrikidis, missed Monday’s game through injury, opening up a roster spot as Piela opted to move Rella up to 157.

“Kaleb Jackson, he’s a freshman who struggled earlier in the year when you could enter multiple kids into tournaments,” Piela said. “He’s just unfortunately at a place where we’re really good. We knew going into this game that it might be up to him.

Jackson’s landslide victory set the stage for Rella’s thrilling end. After losing to Nevlin earlier this season at the Sam Cali Invitational, Rella was admittedly nervous but confident he would be stronger in the third period than his opponent.

“He beat me pretty badly, but I almost caught him in the end (a la Cali),” Rella said. “So I knew in my head that he was gassing. I knew if I struggled all the way through, I would get him.

Rella got the first out and added another in the third to seal the win.

The win marked a crowning moment for Paramus Catholic, who went 2-22 in Piela’s first year with the team in 2015-16. From a room with six wrestlers to one that can rival any in the state, Monday night’s victory is perhaps the best representation of what the program has become – a program that prides itself on character, according to Piela.

“If you do the right thing in class, you’ll do the right thing on the mat,” Piela said. “That’s what we’re proud of in the culture. Our shirts say “duty, honor and culture”. It is our duty to give the best of ourselves. It’s our honor to be there and it’s our culture to give our best.

Paramus Catholic won two league championships in 1978 and 1979. Those are the only titles hanging from the school’s banner in its gymnasium, which beams with history in other sports. That’s why Monday’s victory could be the first ever in the NJSIAA tag team tournament for Paramus Catholic.

It was not lost on any of the wrestlers on Monday night.

“It was awesome,” Rella said. “It shows that we are on the rise. It’s enormous how far we’ve come in the past two years.

Kyle Reiter gave Paramus Catholic a strong start with a 6-4 decision over Roger Diaz in the first fight of the match at 165 pounds. Adam Harris then put St. Peter’s Prep on the board with a 5-2 decision over Eddie Terrieri at 175.

But St. Peter’s Prep got their first win at 215. That’s where Martin Martinetti took a 3-2 decision against Matthew Murray in a game decided by the ultimate tiebreaker. After both wrestlers escaped on straddles, Martinetti stopped Murray from breaking away to win the fight, 3-2.

This set the stage for Paramus Catholic’s big finish.

“Gatorade always tastes better when you win,” Caprio said. “Today he is an enemy, but I have nothing but respect for them.”

Roselle spent 30 seasons at St. Peter’s Prep, coaching football and wrestling, while Caprio, a former Prep wrestler, coached as an assistant at his alma mater for 17 years.

“The kids knew how special this game was for me and Coach Caprio and told us they were going to win for us and they did,” Roselle said.

“Delbarton is tough,” Rella said. “They are really good. We just have to take it one game at a time, and hopefully we can knock off a few kids.

Thank you for relying on us to deliver journalism you can trust. Please consider supporting NJ.com with a subscription.