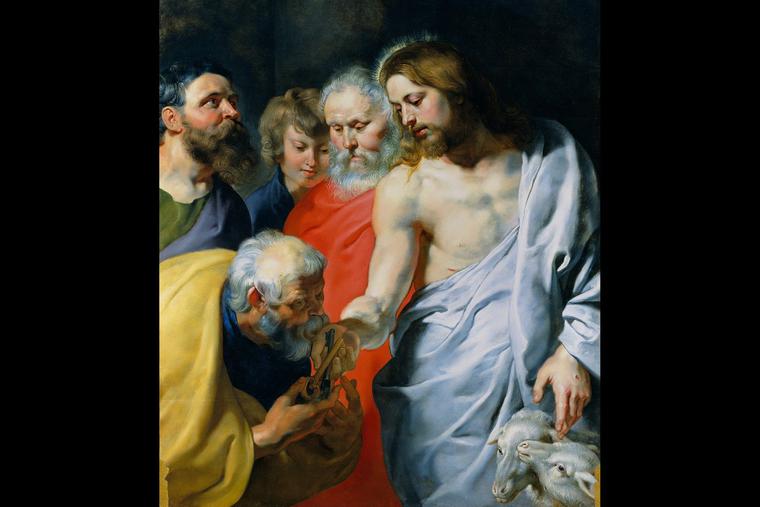 “Peter, do you love me?” | National Catholic Registry

Like last week, the Gospel of the Third Sunday of Easter – Jesus with his apostles on the shores of the Sea of ​​Tiberias and the reconciliation of Peter – remains the same throughout the three years of the Lectionary cycle of readings. This is because he recounts “the third time that Jesus was revealed to his disciples after he was raised from the dead”.

The Gospel presents two events, linked in time and space: the appearance of Jesus in a Eucharistic context on the shores of the Sea of ​​Galilee (called here the “Sea of ​​Tiberias”) and the profession of love of Rock.

Over the past two weeks, the focus has been on apparitions of the risen Christ in and around Jerusalem. Remember, however, that Matthew (28:10, 16) and Mark (16:7) also report that the apostles were instructed that Jesus would meet them in Galilee. Today’s Gospel records a meeting in Galilee.

All of human history changed with the resurrection of Christ. One is nevertheless impressed by the way the Apostles combine their unique encounter with their beloved Lord with the normality of the daily demands of life. Yes, Jesus changed all of human history, but he does not burst into that history in a totally disruptive way. In a sense, life has changed; in another, life goes on. How many people, after all, have dealt with a dead person once? Now compare this unique experience with the very daily conversation of Peter and others: “I’m going fishing. “We will also come with you.

They “got into the boat but that night they didn’t catch anything”.

Where have we heard this before?

We heard it in early February, the fifth Sunday in Ordinary Time (Luke 5:1-11). Jesus had taught the crowds, who wouldn’t let him go, so he convinced Simon to bring him out on the water, from where he taught the crowd. When he finished, he told Simon Peter to “lower your nets for a catch”, to which Simon Peter’s response was, “we’ve been working hard all night and haven’t caught anything”. Yet, obeying Jesus’ instruction, Simon Peter lowers his nets, only to come up with a catch so plentiful that “the boats were in danger of sinking.” At this point, Simon Peter asks Jesus to leave him because “I am a sinful man”. Jesus does not do this, instead inviting him not to be afraid and embarks with him on a new fishing expedition, that of “catching men”.

Once again the apostles – including Peter, James and John, witnesses of the previous event – are challenged to follow Christ’s initiative. And, once again, they catch more fish than they could have imagined. In the previous episode, Luke noted that their nets were tearing, and even with the help of another boat, both boats were in danger of sinking. In today’s Gospel, John records that the nets were “not torn” and that they brought back 153 fish, which some scholars have suggested as referring to all the fish identified by some scholars in the world. antiquity, that is to say a universal socket. This time Peter does not ask Jesus to leave, and this time the breakfast on the shore has Eucharistic connotations.

The last time Peter asked Jesus to go away because he was a sinful man. Today Peter knows that he is a sinful man…and that his sins include denying Jesus. It’s the elephant in the room.

Jesus responds by asking Jesus three times if he loves her. His triple profession of love is destined to expiate his triple denial. The faithfulness of Jesus remains: Peter was the rock on which the Church was to be built, and this rock must be strengthened and not rejected. It will be strong enough to withstand an upside-down crucifixion, but that’s in the future. He had to “tender” and “feed” the sheep of this pasture. This is Christ’s mission for Peter…and every Peter since.

Rubens depicts the Gospel today in his baroque altarpiece, “The charge of Christ to Peter”, which can be seen in the Wallace collectionin London. The work, in oil, which dates from around 1616, was in the Sainte-Gudule church in Brussels until it was sold in 1800 (ecclesiastical dismemberment is not new) and then passed through various private hands.

Jesus and Peter, his vicar, are the central figures in the painting. The centrality of Jesus is evident, both because he is Jesus and because he is the only fully figured vertical figure in the painting. The other three disciples – the young Saint John in the middle – are all at least partially masked by Peter in front of them. Their gaze is also downwards towards Peter, focusing our attention more on him. Peter is also prominent, both in his kiss of the hand of Jesus and in his posture of submission and repentance, emphasized by the horizontal pose.

Jesus is clearly post-resurrection in appearance, the wound to his Sacred Heart (wounded by Peter’s denials) in evidence. The left hand of Jesus points to two sheep, which are clearly entrusted to the care of this shepherd and reinforce the connection with John 21.

What is do not in John 21 are the gold and silver keys in Jesus’ right hand, symbols of the papacy (as seen on the Vatican flag). Jesus had previously given Peter “the keys of the kingdom of heaven” (Matthew 16:14-19) while on the way in Jerusalem, asserting Petrine/papal primacy. While the Wallace Collection commentary says that Rubens “confuses” these events, only in a purely historical sense. As noted, Peter was given the office of Vicar of Christ, and God does not take back His Word. It is not a question for Peter of losing this dignity but for Peter of being at the height of this dignity, which implies loving Christ in a responsible way, that is to say taking charge of the sheep . Jesus is the Good Shepherd, ready to lay down his life for the sheep (John 10:11). To be the Vicar of Christ is to be this Good Shepherd, also ready to lay down his life for the sheep, a martyrdom announced by Jesus in today’s Gospel.

The Dutchman Rubens has been called the voice of the Catholic Counter-Reformation in the Netherlands, then under the rule of Spain but under Protestant influence. That Rubens wanted to emphasize the link between Peter’s reconciliation with Christ and his continued Petrine primacy was particularly appropriate at this time.

The Baroque characteristics of the painting – powerful, muscular, “larger than life” figures, austere primary colors on a darker background and a light that illuminates these figures – are all characteristic of Flemish Baroque and in particular of Rubens, his recognized master. in this region.