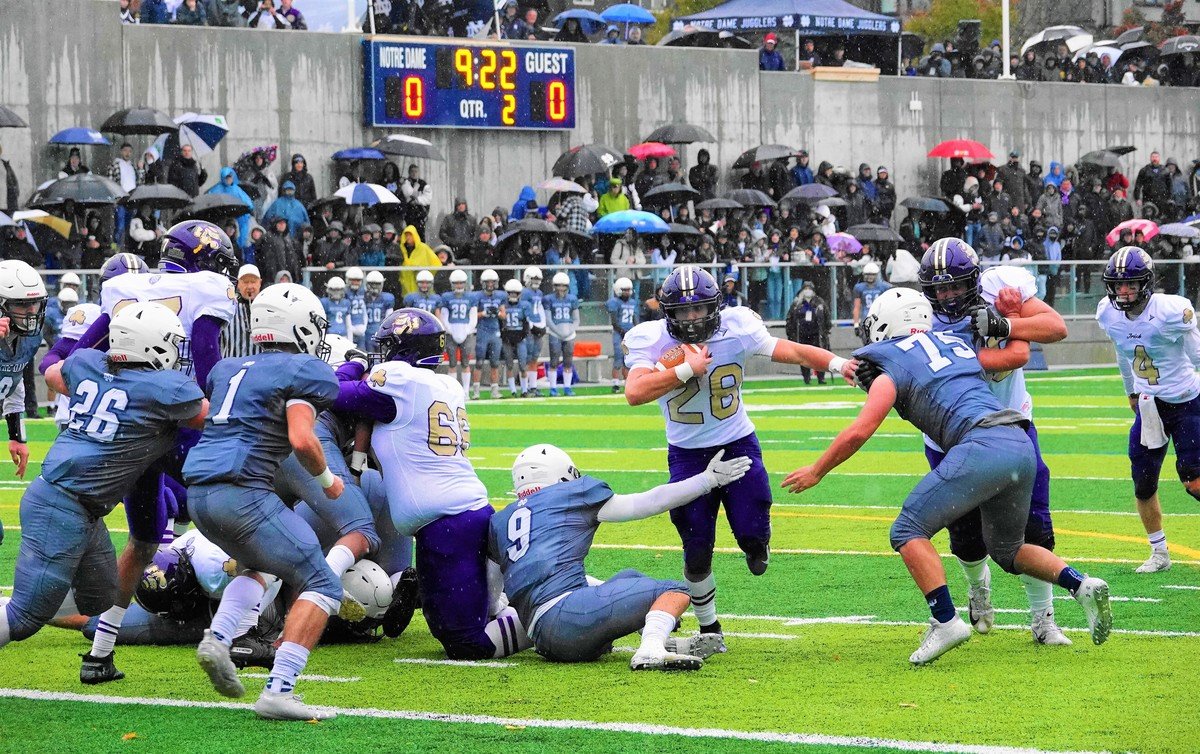 It’s a high school battle straight out of the movies – East Van versus Westside Vancouver – and a rivalry fueled by the fact the two schools haven’t faced each other in two years as the COVID pandemic forced cancellation of the entire football season last year.

So when Irish football teams Notre Dame Jugglers and Vancouver College Fighting Irish rushed to Juggler Field to play the 65th Archbishop’s Trophy Game, it would be a day to remember.

An icy wind cut the November air, sending freezing rain down on players and spectators, but the harshness of the weather could not lessen the excitement on the pitch and in the stands filled with umbrellas. Not only were the Jugglers and the Irish the two highest-rated AAA boys’ high school teams in the province at the time, but the ground on which the two Catholic schools renewed their long-standing rivalry between the cities saw its first major action. . .

Funded in part by Project Advance of the Archdiocese of Vancouver, the synthetic turf pitch and grandstand allow Notre Dame Regional High School to host home games on its Renfrew-Street campus for the first time in its history. .

The American football field is neatly tucked away in a comfortable corner of the school grounds, with only a small buffer zone between the buildings and the grill on the east and north sides of the field.

“It’s been a long process,” said Jugglers assistant coach George Oswald, a 1964 ND graduate. University letters sports blog about the construction of the field. “The first idea for a field came back in the 1960s.”

The dream began to come true when the school embarked on a major renovation project in 2004, and then came to fruition in 2011 when Oswald confirmed that the newly renovated school’s footprint would leave just enough room for a field and a grandstand with 730 seats.

However, funding and municipal regulatory issues weighed on the project. “There were several neighbors who were very upset with all of this because the rumors going around were that it would be a 20,000 seat stadium,” said Denis Kelly, Jugglers head coach, 1968 VC graduate., Recount University letters. â€œEverything became disproportionate, so they had to form a committee to meet with them and keep everyone informed. “

When the field was finally completed this fall, all eyes were on the timing and renewal of the Archbishop’s Trophy showdown. The two teams arrived for the big game after following very different paths. In 2019, the Fighting Irish enjoyed one of the most memorable seasons in school history and dominated the AAA Provincial Championship. The Jugglers, meanwhile, had scooped the regular season with just two wins, but made it to the semi-finals before being eliminated.

In 2021, Vancouver College maintained their dominance from 2019 and maintained their initial No.1 ranking throughout the season, while Notre Dame steadily increased in the rankings to reach No.2.

The winner of the Grand Showdown would not only win the Archbishop’s Trophy, but also enjoy a week off in the AAA Coastal Playoffs. “It will be a special game,” said a shivering spectator.

It turned out to be a deadly battle of grill titans. In the end, the Irish took a 9-6 victory in a hard-hitting, turn-over-packed match played in front of a wind-whipped crowd, holding an umbrella and standing only.

VC ended their regular season undefeated but lost in the Coastal quarter-finals on November 20, knocking the Irish out of all other action. ND’s season ended with a semi-final loss to Coastal the following Saturday.