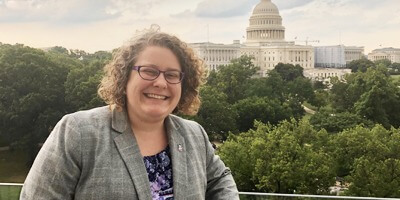 Dr Anna Quider, NIU Assistant Vice President for Federal Relations, was elected a Fellow of the American Physical Society (APS) in recognition of her “stellar leadership in science policy and advocacy, as well as for promotion and mentoring of early career physicists. “

The distinction is awarded annually to no more than half-1% of APS members.

“This is a well-deserved recognition for Anna, a true champion of science and science policy in the halls of Congress,” said Gerald Blazey, vice president of the research partnerships and innovation from NIU. “She has done an exceptional job representing NIU in Washington, DC, and I am delighted to see her work catch the attention of her peers.”

Quider is one of nine NIU scientists, including Blazey, who have been named APS Fellows while in college for the past five decades. She is the first NIU woman scientist to receive this honor.

Quider joined NIU as director of federal relations in 2014 and is one of the few scientists in the country with a doctorate who currently heads a federal relations office at a public research university. She received a BA in Physics and Astronomy, Religious Studies, and History and Philosophy of Science from the University of Pittsburgh. She holds a doctorate. in Astronomy from Cambridge University, where she was a Marshall Fellow and National Science Foundation Fellow.

Based in Washington, DC, Quider advocates for NIU students and faculty and has introduced many of them to members of the Illinois Congressional delegation. She shares NIU’s cutting-edge research with members of Congress and their staff, and has also mentored faculty and students on how federal politics work and the importance of federal research funding.

A leading voice for the equitable distribution of federal research funding, Quider is the scientific team leader for the Government Affairs Council and an ex-officio member of the Executive Committee of the Research Council, both roles within Association of Public and Land – subsidize universities.

Quider works with students from NIU and other institutions to help them develop applications for prestigious scholarships and scholarships. She also sits on the Selection Committees for the APS Fellowships, the American Association for the Advancement of Science Congressional Science Fellowship, and the Marshall Fellowship, the latter on appointment of the UK Ambassador to the United States.

In addition, Quider is a former president-elect of the Science Coalition, a non-profit, non-partisan organization representing more than 50 of the country’s leading public and private research universities. The Science Coalition is committed to supporting the federal government’s investment in basic scientific research.

â€œI am touched by this recognition,â€ Quider said. “I am grateful for the many opportunities NIU has provided me over my seven plus years as a Huskie to become a leader in science policy and advocacy in the United States and a mentor to students and scientists. early in their careers interested in science policy. “