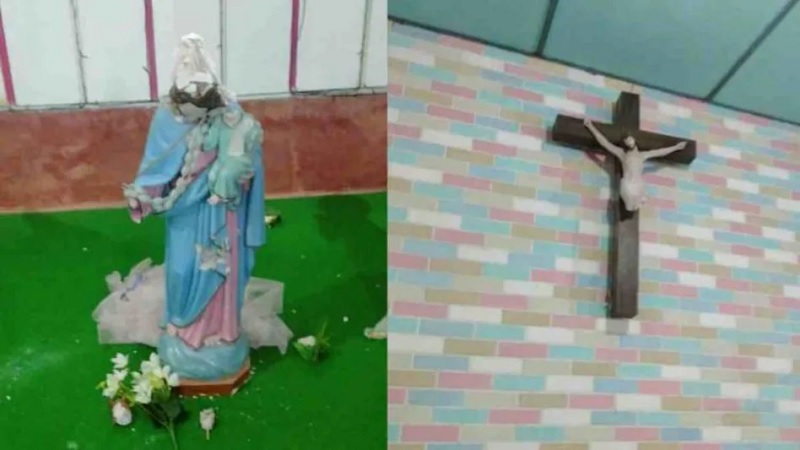 The incident took place at a Catholic church in North Garo Hills; case registered, but no arrests to date

In a shocking incident, a Catholic church located in Daram village in the North Garo Hills region of Meghalaya was reportedly vandalized by disbelievers last week. According to NE Now, the vandals cut off the heads of the statues of Mother Mary, Baby Jesus and Saint Joseph.

Shillong Times reports that it is one of the oldest churches in a remote part of the district. He further reports that the vandals tried to damage the holy crucifix placed on the upper part of the church wall, above the altar, where the Holy Eucharist is celebrated. However, they ended up destroying the idol’s leg.

The incident reportedly took place on August 22. The First Information Report (FIR) was filed at Resubelpara Police Station on August 26 and one case was registered. According to the publication, there was a delay in reporting the crime because church members were attending a convention in the town of Tura.

Shailendra Bamaniya, IPS, North Garo Hills Police Superintendent, told News 18: “The incident happened around August 24, however, they filed a complaint with us on August 26 and the case was recorded”.

Investigations are ongoing, but no arrests have been made so far. Although it is not yet known if it was a hate crime, Shillong Times reports that a mentally disabled person was allegedly involved in a similar attack in the past and is also one of the suspects in this case.

Did you have a good Christmas weekend? Take a look at how communal crowds celebrated theirs

Karnataka: Another vandalized church, this time in Chikkaballapur

Over 300 attacks on Christians reported this year