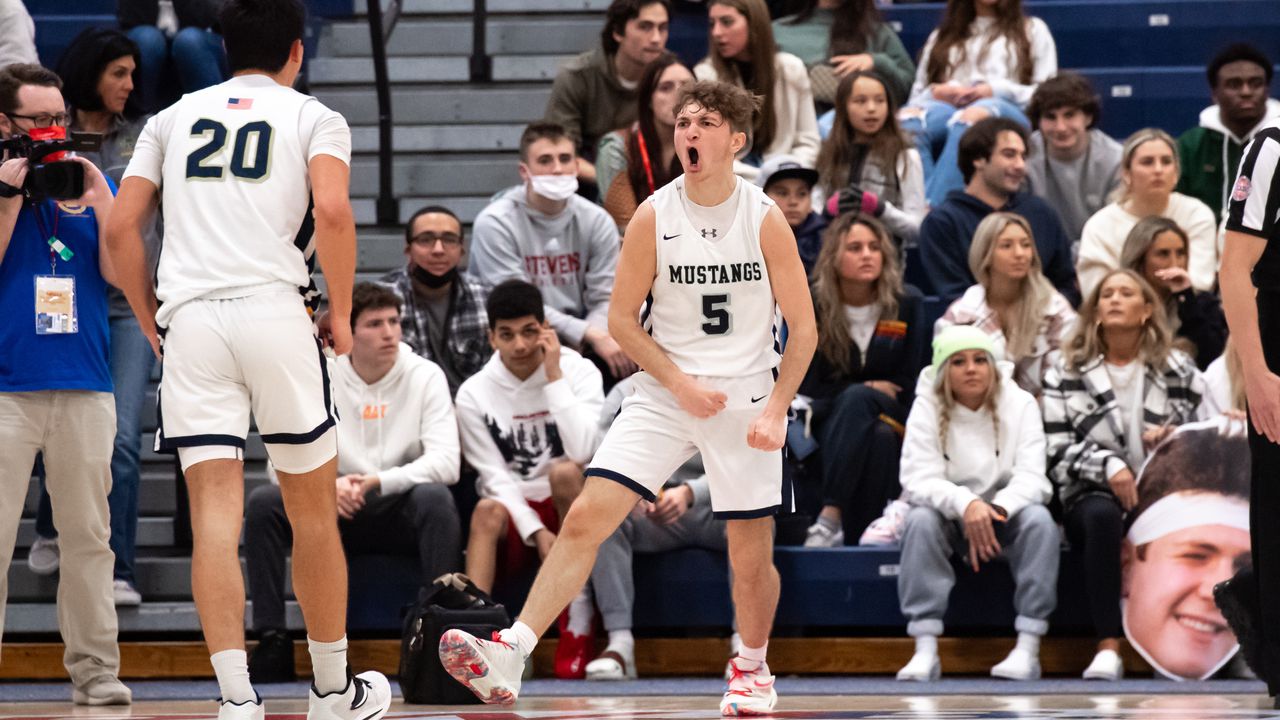 Senior Jack seidler sat on the floor after a post-game photo at RWJBarnabas Health Arena on Thursday night with the WOMB Christmas Classic Championship within reach and left a simple but meaningful line: “It feels good to win.”

After two straight years of grief, Marlboro had something special to celebrate.

The Mustangs, No.9 in NJ.com’s Top 20, defeated No.12 Red Bank Catholic, 61-58, in a two-way battle of Shore Conference powers and made history. It’s only December and there is a lot of ball to play, but winning this title at the start of the season is something this team will never forget.

This is the first time Marlboro has won a tournament championship. Period.

“These guys are so special and they deserve it so much,” said Marlboro coach Michael Nausedas. “With the adversity they went through I knew they would dig deep and from the moment we left the locker room we knew we were going to win this game. There was no way we would lose.

Marlboro and Red Bank Catholic traded blows throughout the first half, taking turns picking up the momentum of the game in a showdown between two of the state’s top teams.

At the end of the first quarter, Marlboro was leading by three points.

Red Bank Catholic turned things around in the second to lead 30-28 at the half. The Caseys were in good shape and feeling great for the first 16 minutes, especially how their defense managed to contain Marlboro superstar Seidler and the top guard. Jonathan spatola.

Each of these players averaged 20 points per game last year.

They combined for just seven points in the first half here.

Senior Zack Molod took over, however, finding an early rhythm, starting with 10 of Marlboro’s 14 points in the first quarter. He added seven more points before halftime, keeping the Mustangs within striking distance as he scored 17 of his 19 points in the first half.

“From day one of training this year (Zack) hasn’t missed a beat,” said Nausedas. “The kid has been shooting so well from practice and when he catches fire, nothing stops him. He made two faults today and we thought about taking him out, but he said, ‘Coach, no. Let me in. I knew he was going to be a great player this year. He was the kind of guy no one knew, but now they know it.

If Marlboro was to fend off a talented RBC team, he needed their stars to shine.

Red Bank Catholic came out and struck the first shot of the second half, but then Seidler and Spatola scored back-to-back buckets to put Marlboro back the lead. Mustangs never hung around again.

Seidler really started to feel it in the third quarter, scoring 10 of his 16 points in that frame. He scored a 3 point to give Marlboro their biggest lead of the night and handed his team to six points with another deep ball. This one really got Seidler moving as he raised three fingers as he came back on defense.

Spatola also came to life in this neighborhood and carried it over to the fourth.

The senior has scored nine of his game-high 20 points in the final eight minutes. Spatola is only 5’8 ” tall, but he moves so well with the ball in his hands and has a unique ability to dribble, cut, create space and shoot over defenders and straight. in the net. This has been on display down the stretch.

“Our team has a lot of experience and we’ve been playing together since the third year,” said Spatola. “We know each other so well. It was a great atmosphere and we love to play in these great competitive games. We are all ready to step in when the team needs us.

Elders Vincent spatola and Jay ratner completed training and came up with winning games for Marlboro. The Mustangs’ starting five-man suit was on the field for 31 of the 32 minutes, but you never could tell from how this team held up late in the game.

Senior Cyril Arvanitis was electric from the 3 point range and finished with 14 points, while the second Zach Meeks found its way to the rim and added 14 more. CJ Ruoff developed different ways of scoring and ended the night with 13, senior Alex Bauman also made big plays and added seven, and a second Gioacchino Panzini increased by eight points.

Red Bank Catholic trailed for most of the second half but continued to push their way into the game. The Caseys were led by a single basket eight times and were left with the ball and a chance to take the lead in the dying minutes of the game. It could have gone both ways at that point.

Molod did manage a steal on the defensive side, however.

After a failed attempt on the counterattack, Seidler managed an offensive rebound and gave the ball underneath to Jon Spatola, who came up strong and made it a four-point game. Meeks responded on the other end, but late free throws from Seidler and Spatola sealed Marlboro’s victory.

“It was awesome,” Seidler said. “We’ve been through so much grief over the past few years and finally having one feels good. Hopefully this is the first in a long series for us this season. We wanted it more today and everyone contributed. It was very fun.”

Last winter, Marlboro advanced to the Shore Conference final and faced the undefeated Manasquan. The Mustangs came in as underdogs, finding a place in the game after a surprise win over Ranney in the semifinals. Marlboro proved he belonged from start to finish and left it all on the floor.

The Mustangs narrowly missed, Manasquan winning a layup that beat the buzzer.

That ending opened up an injury the year before when Marlboro fell to South Brunswick, 72-71, in the section final, losing in a last-second layup in the championship game. These moments snatched titles the Mustangs dreamed of. Now they’re finally bringing one home to Marlboro.

It’s the start of the season and it might just be a holiday tournament, but for the Mustangs it was the perfect way to close 2021. And Marlboro can’t wait to see what the future holds. in 2022.

“We have just broken the fate of the championship,” said Nausedas. “In every championship game we played, we lost on the buzzer. This is really great, but we are not finished. These guys want more. This is the very first championship; Marlboro didn’t win anything. This is our first title. Our goal list is long, but we’ve hit our first half goals so far, and we’re really excited.

The NJ High School Sports newsletter now appears in mailboxes 5 days a week. Sign up now and be the first to get all the boys and girls sports you care about, straight to your inbox every day of the week. To add your name, Click here.

Thank you for relying on us to provide journalism you can trust. Please consider supporting NJ.com with a subscription.