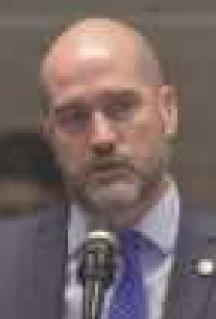 On one end of the Missouri Capitol last week, Sen. Greg Razer was making another failed attempt to convince his colleagues to enact legal protections in state law for LGBTQ Missourians.

“I’m still seen as controversial,” said Razer, a Kansas City Democrat who is one of six openly LGBTQ lawmakers in the Legislature and the only Senate member, last week in the Senate.

Hours later, on the other side of the House Rotunda, Rep. Chuck Basye, R-Rocheport, proposed a measure allowing voters to ban transgender girls from participating in their school district’s women’s sports teams.

“It’s not about hate. It’s a matter of fairness,” said Basye, who added the provision to an omnibus election bill. “There are many examples in our society that men are biologically superior to women.”

The dynamic was a synthesis of the fate that LGBTQ issues have faced in the legislature for years.

Missouri’s non-discrimination law, which would prohibit discrimination based on sexual orientation or gender identity, has languished in the legislature for 24 years. It has been three years since he was even heard by a committee.

Meanwhile, legislation targeting transgender students has won support in the House for the past two years, although it has yet to pass the Senate.

“I grew up in a school district that would vote tomorrow to put this in place,” Rep. Ian Mackey, a St. Louis Democrat who is gay, told Basye on the House floor. “…Thank God I got away with it. And I think every day of the kids who are still there who didn’t make it, who didn’t escape this kind of sectarianism.

Some lawmakers had particularly hoped this session would bring progress on the issue, after former state Rep. Tom Hannegan, a gay Republican lawmaker, died of a stroke last year. He was 51, and during his six years in the Legislature, he championed legislation to pass Missouri’s Non-Discrimination Act, known as MONA.

“It’s something that was really, really a call from Tom,” said Rep. Shamed Dogan, a Ballwin Republican who was Hannegan’s former colleague and filed MONA this year in his honor, “and just something that he wanted to see because it would help not just him, not just people like him, but everyone in Missouri.

During a debate last week on a bill that would allow state employees to be paid twice a month, Razer proposed an amendment to make it illegal for the Office of Administration to refuse to hire. or fire someone because of their sexual orientation or gender identity.

The amendment, which would apply only to state employees, was proposed after senators just passed an amendment that would prohibit public employees from being required to get a COVID-19 vaccine as condition of employment.

But for some lawmakers, the issues were fundamentally different.

Senator Bill Eigel, R-Weldon Spring, said that while he was in favor of protecting someone’s right over their medical decisions, he “didn’t want to create more divisions under the law of state or our constitution that divides the public unless absolutely necessary”.

Additionally, Eigel said that having no protections for LGBTQ Missourians in state law “hasn’t prevented tremendous advances in societal opinion.”

“So let’s make more progress,” Razer said, later adding, “How are we going to protect the anti-vaxxers but not me?”

The version of the bill was eventually withdrawn before Razer’s amendment could be voted on.

Unable to get a debate, let alone a vote, on MONA, in recent years lawmakers have used amendments and rare procedural measures in hopes of forcing the issue onto the agenda.

This continued last week, when Rep. Chris Sander, R-Lone Jack, lobbied to expand the scope of a bill to allow debate on the issue. His efforts failed when his amendment was ruled out of order.

Sander, who is gay, also filed a standalone bill that similarly prohibits discrimination based on a person’s sexual orientation. But unlike other MONA releases, Sander’s does not include gender identity.

He’s open to adding gender identity to his bill, Sander said, “but I don’t feel like I’m the one leading the discussion, because that’s not how it’s done. I identify myself.”

Shira Berkowitz, senior director of public policy and advocacy for PROMO, a statewide organization that champions LGBTQ equality in Missouri, said versions of MONA that only included protections based on sexual orientation probably could have passed years ago in the legislature. But leaving out protections for transgender Missourians isn’t something PROMO is willing to compromise on.

This is a position shared by Hannegan.

“So if anything was going to stick in his memory,” Berkowitz said, “then we wanted to make sure it was really something that he would have supported and stood for.”

For hours during last week’s House debate, Republicans stressed that Basye’s proposal was necessary to ensure fairness in girls’ sports.

But Democratic lawmakers who spoke out against the bill noted that the Missouri State High School Activities Association already had a policy outlining requirements for transgender youth participation in sports and argued that transgender children were being used for purposes policies.

“It’s a problem because conservative groups lost gay marriage. You tried to do it with toilet bills, instilling fear in trans people,” said Rep. Martha Stevens, D-Columbia. is simply transphobia.”

The amendment eventually passed by a vote of 89 to 40, and Basye said it was just one avenue by which he would try to move legislation forward on the issue.

Opponents of Basye’s amendment were quick to point out that there had been no committee hearings on any version of MONA for several years.

In the Senate, Razer alleged during last week’s debate that Senate Pro Tem Chairman Dave Schatz, R-Sullivan, “intentionally” referred his version of MONA to a committee where it would never be heard, which Schatz denies. categorically.

“That was not my intention at all,” Schatz said.

Both Sander and Dogan have said they hope to see their bills heard, but no bills have been scheduled to be heard by the House Select Committee on Litigation Reform. Committee chair Rep. Bruce DeGroot, R-Ellisville, declined to comment.

Even if the bill is not heard, Dogan said he hopes behind-the-scenes discussions with religious organizations and the LGBTQ community will help lay the groundwork for consensus to be reached in the future.

Rep. Rasheen Aldridge, a St. Louis Democrat who also filed a version of MONA this year, said there was a particular need to help improve mental health outcomes for LGBTQ youth who experience discrimination.

“I’m a proud gay, black, disabled man,” Aldridge said, later adding, “No one should have to kill themselves just because they want to love someone who can look like or identify with them (the same only them.”