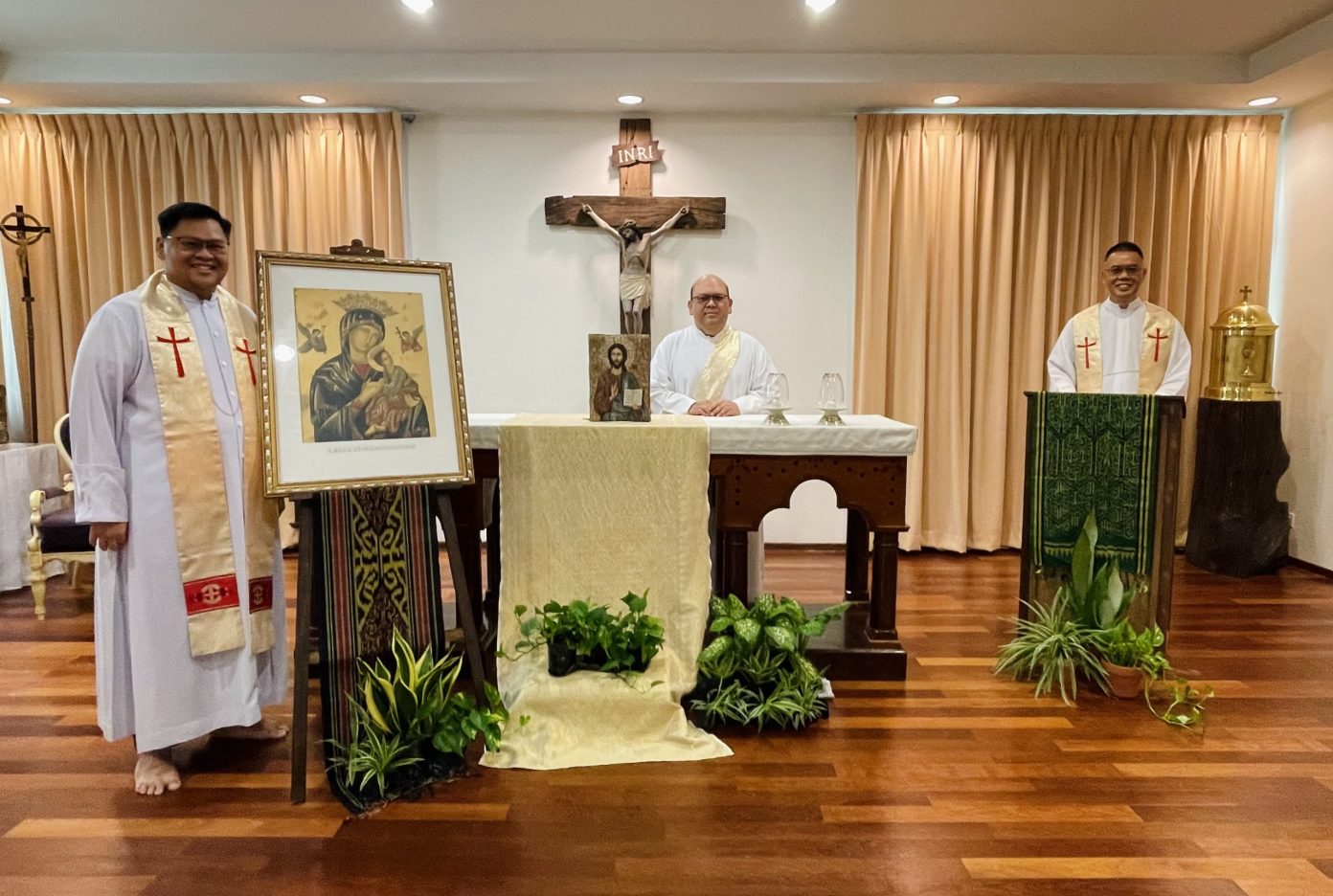 The Archdiocese of Kuching is organizing a day of joint recollection with priests, religious and laity with an emphasis on the construction of a synodal church.

Chapelle de la Sainte-Famille, ACCPC from where the procession and the opening prayers were broadcast live so that participants could participate. October 16, 2021 (Photo: Archdiocese of Kuching)

By Ivy Chai
The Archdiocese of Kuching hosted its first joint online day of recollection on October 16, 2021 via Zoom, which was attended by around 300 participants including members of the Archdiocesan Pastoral Council (APC) commissions and committees, priests, religious, seminarians, parish counselors and church leaders.

In her opening address, APC President Christina Eng stressed that the main event to focus on over the next two years would be the Synod of Bishops., summoned by Pope Francis. She expressed her desire that everyone â€œcontinue to live with the virus among us and with our agenda – that is, to be a Church with the mission of bringing Jesus Christ to the ends of the earth. Earth “. We are â€œChurch: Disciples of the Word in communion for the mission,â€ she added.

In a poignant tribute to all priests, Christina said: â€œDear Reverend Fathers, how we need you! For the sacraments, for confession, for the Eucharist, when you are sick or just to remember that there is a God of love and mercy in your homilies every Sunday.

Archbishop Simon Poh, on the other hand, underlined how blessed he felt to have two bodies to help him in the pastoral care of the People of God. It has the Council of Priests comprising 40 priests incardinated in the Archdiocese of Kuching, and the support of the Pastoral Council of the Archdiocese which includes the 12 parish pastoral counselors from the entire archdiocese, working in close collaboration with their rectors and priests. respective.

Archdiocese of Kuching
The prelate briefly touched on the history of the Catholic Church, starting with the day the first Mill Hill missionaries set foot on Kuching soil on July 10, 1881 (140 years ago) until the founding of the Archdiocese of Kuching on May 31, 1976, making it just over 45 years old.

The Vatican Council II in 1962-1965 presented a new model of the Church, highly institutional and hierarchical prevailing, to one centered on communion. It is the renewed vision of Vatican II of the Church as People of god, called to be the Light of the World “Lumen gentiumâ€.

The Archdiocesan Pastoral Council which was later formed now includes the Commissions for Biblical and Religious Formation, Christian Family Life, Youth and Campus, Mission and Human Development, and Committees for Vocations, Counseling and social communications.

Archbishop Simon highlighted some notable events that had been organized:

As these events involved the grassroots in villages and parishes, they gave impetus to the formation and edification of the whole church of the Archdiocese of Kuching. He called this a â€œprocess of synodalityâ€.

The theme, now adopted by bishops, priests, religious and lay leaders of the Church, was coined by combining the visions of his predecessors, Archbishops Emeritus Peter Chung and John Ha of “We Are the Church” and â€œThe Church – Disciples of the Word, in Communion for the Missionâ€.

Archbishop Simon said the Holy Spirit has made people realize that evangelism is not just the responsibility of bishops, priests or religious. The Assembly discerned that the lay faithful, too, are called to be part of the Church in this mission.

To prepare the 2sd KAPA in 2022, the task of the Church is now to examine the performance and challenges faced since 2017.

The word synod is a Greek word sunodos which means ‘assembly’ or ‘meeting’. It comes from Sun– ‘together’ + hodos ‘manner’. Therefore, we come together as a synodal church to seek a way forward in communion, participation and mission.

Archbishop Simon said: â€œOur Archdiocesan experience has given us some basic experience of being a Synodal Church – Communion, Participation and Mission. As a result, we will align the 2nd KAPA roadmap with the synodal roadmap, â€he added, concluding with some relevant questions to reflect on communion, participation and mission for a post-pandemic church. It also provided a selection of recommended guidelines.

Father Patrick Heng, responsible for leading the path to the Synod in 2023 and the Pan-Malay Pastoral Convention in 2026, gave an overview of how and when the vision and mission of the Archdiocese, â€œWE ARE THE CHURCH: DISCIPLES of the Word, in COMMUNION for the MISSION â€, was formulated. He then gave an overview of the path to the PMPC 2026, outlining the dates and process of the various Assemblies that will be held, leading to the PMPC.

The vision of PMPC 2026 is as follows: â€œThe Catholic Church in Malaysia comes together as clergy, religious and lay people to celebrate, Listen and walk in the light of the Lord (cf. Isaiah 2: 2-5). The working group will adopt a See-Act-Judge methodology with a set of questionnaires to be distributed to all parishes in January – March 2022.

Father Galvin Richard Ngumbang supported the unveiling of the roadmap by revealing the purpose of the synod and outlining the diocesan phase of the synod.

Sr. Rose Wong SSFS, representing Religious Orders / Congregations in Sarawak, indicated that she had a working committee of 11 representatives of different orders for the Malaysian Catholic Religious Assembly 2023. She said: â€œAs a fellowship of missionary disciples, we become more the salt of the earth and light of the world. Blessed with the different talents and gifts, we continue this missionary journey. Our consecrated life must reflect the testimony contrary to the culture or the values â€‹â€‹of the Gospel in society.

Father Ramon Borja concluded the roadmap towards the Pan-Malay Pastoral Convention 2026 with the vision, goals and plans of the Youth Commission of the Archdiocese of Kuching, for the Malaysian Catholic Youth Assembly 2025 and at -of the.

Let the journey towards PMPC 2026 beginâ€¦ towards a truly Malaysian Church.–The Catholic of today

The roots of the local Centraide organization go back to 1946