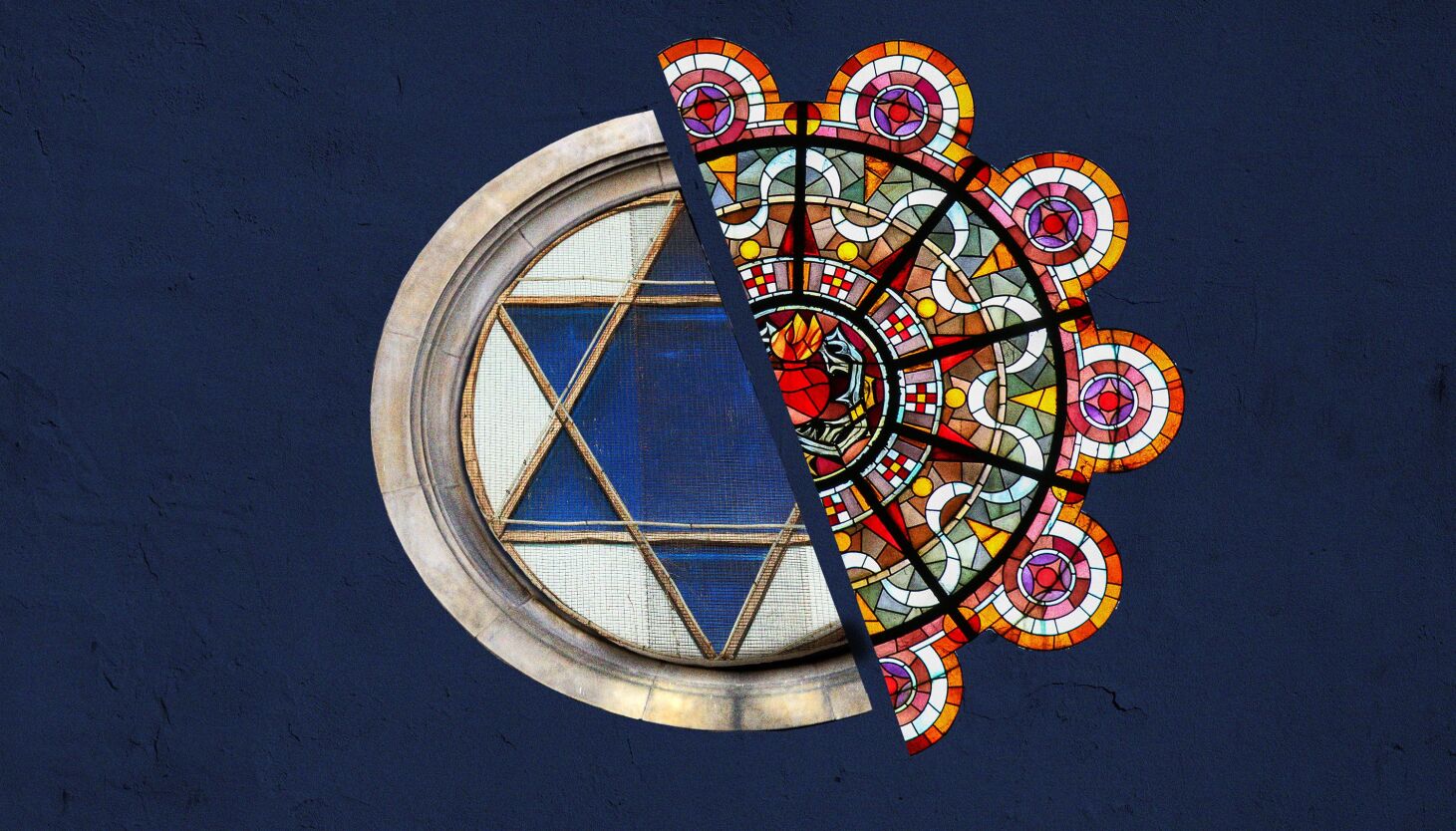 On the right, the expression “Judeo-Christian” has become like a password: it’s a short and quick way to prove your conservative ilk.

“We believe that the fate of America depends on upholding the Judeo-Christian values ​​and principles of the founding of our nation,” former President Donald Trump recently said at Faith and Freedom’s Road to Majority conference. Coalition in Nashville, Tennessee.

“We know this is a nation with a deep Judeo-Christian base. We have to defend it at every turn,” Mike Pompeo said during the Conservative Political Action Conference in February.

Explaining his decision to create the National Association of Christian Legislators in 2020, Arkansas State Senator Jason Rapert said, “Our ultimate goal and intent is to restore the Judeo-Christian foundations of our government. that were planned from the very beginning.

And, in Idaho in 2015, a group of republican politicians cited the “Judeo-Christian foundation of the founding of the United States” in their proposal to make the state formally Christian.

But experts say the phrase is problematic at best, with critics describing it as some sort of “marketing campaign” that has overstayed its welcome.

“The phrase is… a modern phrase stemming from a contemporary political context that sidesteps a painful history between Jews and Christians in which there was a huge power differential,” said Malka Simkovich, Crown-Ryan Professor of the Jewish Studies and Director of the Catholic- Jewish Studies Program at the Catholic Theological Union.

She and others believe that the term “Judeo-Christian” describes the history of violent anti-Semitism that Jews have faced in Christianity and erases important theological differences between Judaism and Christianity, erasing Jews in the process.

“There’s nothing Judeo-Christian about it,” said Meredith JC Warren, senior lecturer in biblical and religious studies at the University of Sheffield.

Critics also say the inclusion of “Judeo” gives a false sense of multiculturalism when the term is actually used to exclude Muslims, atheists and members of many other faiths. They hope that the term “Judeo-Christian” will soon be retired in favor of a more inclusive and precise alternative.

What is the history of the term “Judeo-Christian”?

The origin of the phrase “Judeo-Christian” is not entirely established: European scholars have noted that German theologians used the term in the early 1800s. Today the term is sometimes used – problematically , according to Simkovich – in reference to “the first disciples of Jesus who lived in the Jewish community”.

In the American context, the term “Judeo-Christian” was part of “a redefinition of democracy that began in the 1930s in response to totalitarianism around the world,” said K. Healan Gaston, author of “Imagining Judeo-Christian America: Religion, Secularism, and Redefining Democracy » and a lecturer on American religious history and ethics at Harvard Divinity School.

In the wake of the mass immigration of Catholics and Jews to what was then a predominantly Protestant country, the term “Judeo-Christian” was also a response to anti-Catholic sentiment and anti-Semitism. It can be understood as an attempt to create a tri-denominational unity among the three religious groups that were, at the time, central to American life, Gaston said.

This unity was instrumental in the war effort and post-war nation-building, becoming deeply intertwined with the American concept of democracy. The phrase became ubiquitous during Dwight D. Eisenhower’s presidency, although Eisenhower later walked away from the term privately when he realized how exclusive it was, according to Gaston.

The term came in handy during the Cold War to differentiate America from our supposedly non-religious communist enemies, said Marc Zvi Brettler, a professor of Jewish studies at Duke University and co-author of “The Bible With and Without Jesus: How Jews and Christians Read the Same Stories Differently.”

“One of the times the term was really ascendant was as an anti-communist term,” Brettler said.

Some of that anti-communist residue lingers on the word today, as the right often mischaracterizes Democrats — a group that includes the majority of American Jews as well as black Americans, one of the most religious demographics in the country. — as godless secular humanists at best. and radical socialists at worst.

For the most part, from the 1930s through the 1970s, it was liberals who used the term “Judeo-Christian,” Gaston said. But in the 1970s, the phrase began to gain traction with the right. And it took off in the 1980s with the conservatives. Ronald Reagan included the term in his presidential platform, said Gaston, who explained that Reagan had imprinted a “Judeo-Christian framework on top of deep-rooted anti-communism and a free market economy.”

After Reagan, Jerry Falwell and his Moral Majority picked up the phrase and it was used in five subsequent Republican presidential platforms, Gaston said, but never on the Democratic side. It remains shorthand for all those ideas Reagan loaded into the term, including free-market capitalism, family values, and other conservative ideals.

What do Jews think of the expression Judeo-Christian?

For some Jews, the inclusion suggested by the phrase “Judeo-Christian” has been comforting, Gaston said, adding that the Conservative movement has always been a little more sensitive to the term than the Reform and Orthodox movements.

But many American Jews have a complicated relationship with the term, said Brettler, an observant Jew.

While it’s “nice to talk about the commonalities between Judaism and Christianity,” he said the current use of the term represents a “problematic construct that makes things much crazier than they need to be. “.

The phrase underscores “the similarities and (denies) almost entirely (denies) the differences,” between Christianity and Judaism, Brettler added.

There is also a risk that people who embrace the term “Judeo-Christian” deny the anti-Semitism experienced by early Jewish immigrants to the United States.

Has the phrase spread outside of the United States?

The expression “Judeo-Christian” – in the exclusive sense – has also spread within the European right, particularly in France, according to Nadia Malinovich, author of “French and Jew: Culture and the Politics of Identity in Early 20th-Century France and researcher affiliated with the Groupe Société Société Religions Laïcités at the CNRS.

“Jews have been refocused as white insiders in European society while Muslims are now seen as the main others,” Malinovich said. The phrase, she added, is “to be circulated” as a cover for Christian nationalism.

“Rather than saying ‘Christian civilization’, it’s Judeo-Christian. … It’s a way of trying to cover up the fact that it’s only Christian by somehow implicating ex-post facto Jews,” she said.

Erase theological differences and contemporary and historical tensions between Jews and Christians, Malinovich said, is, among other things, “a disrespect to Jews who died in the Holocaust.”

Moving away from Judeo-Christian

The term “Judeo-Christian” omits the third Abrahamic faith – Islam – and erases its contributions to European history and, by extension, Western culture. The phrase ignores the fact that Jews historically lived with greater freedom and security in the Muslim world than in Christendom, Warren said.

In the American context, not only does “Judeo-Christian” exclude Muslims, Warren added, but also Indigenous communities.

“In North America in particular, it is important to highlight the rights and traditions of the First Peoples of the continent rather than erasing them, too, with Judeo-Christian expression,” she said.

Many religious experts say the term should be dropped in favor of something more inclusive, like “interfaith.”

“Judeo-Christian” was “a brilliant civic invention that has broadened the nation’s understanding of itself and reduced anti-Semitic and anti-Catholic bigotry,” Eboo Patel, founder and president of Interfaith America, told the Deseret News recently. .

“Now that America’s demographics have changed yet again—there are as many Buddhists and Muslims in the country as there are Lutherans—it’s time to write the next great chapter in American religious history. And we believe that” Interfaith America” ​​is the correct title for this chapter.

Rather than trying to create a melting pot in which individuals’ identities are subsumed into a larger national identity, we should strive for a potluck, Patel said, “where people’s unique identities are contributions welcome to the party”.