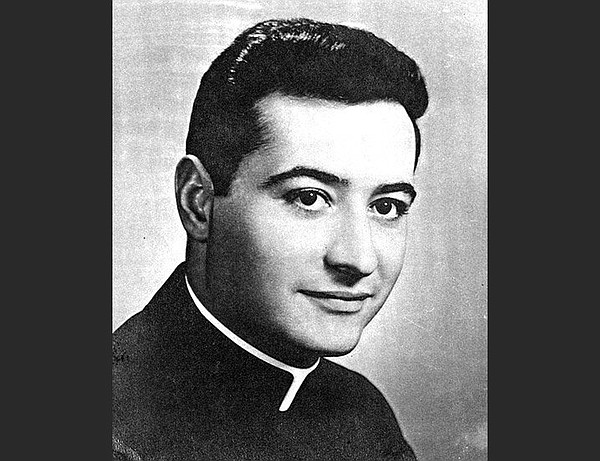 He worked with United Farm Workers in Oregon, advised draft-age men on how to register as conscientious objectors during the Vietnam War, protested the US nuclear weapons program and was arrested in 1985 outside the South African Embassy in Washington as part of the worldwide movement against the apartheid regime. But this radical grew from one of the most conservative grounds possible, starting as a Catholic priest in Little Rock.

Joseph Henri Biltz was born May 29, 1930 in Little Rock and studied philosophy at St. John’s Seminary – now the St. John’s Center in Pulaski Heights, seat of the Catholic diocese. There he received his baccalaureate in 1951. He then completed four additional years of study in theology and was ordained by the Catholic Church in 1955 at St. Andrew’s Cathedral.

Biltz then earned a master’s degree in theology (1957) and a doctorate in moral theology (1962) from the Catholic University of America in Washington before completing two years of postdoctoral studies in theology (1963-1964) at the Academia Alfonsiana in Rome. He was assistant professor of theology at St. John’s Seminary in Little Rock from 1959 to 1966 and was dean of students in the College’s and theology departments from 1961 to 1966 (excluding his postgraduate years). Throughout his early career, Biltz’s interest in human rights and community activism was evident; he was a member of the steering committees of the Little Rock Conference on Religion and Race (1964-1967), the Little Rock Catholic Inter-racial Council (1963-1967), the Little Rock Diocesan Ecumenical Commission (1966-1967) and the Arkansas Council on Human Relations (1963-1967).

In 1967 he left St. John’s Seminary and served as pastor of St. Francis of Assisi Church in Forrest City for a short time. There, he started a Headstart program and organized Forrest’s bi-racial town council on human relations, serving as co-chair. From 1967 to 1971, Biltz was associate professor of theology at Mount Angel College in Oregon, where he continued his involvement in service to the President’s Student-Faculty Advisory Council (1968-1971) and as an advisor to the faculty with the Black Student Union (1969). –1971).

Biltz helped the United Farm Workers of Oregon organize during the grape and lettuce boycotts; proposed and later oversaw the use of college dormitories as accommodation for migrant workers; and volunteered with the Valley Migrant League to help families receive services. He also advised campus conscientious objectors to the Vietnam War.

Joseph Biltz (right) with David Boileau, James Drane and Bruce Street at a seminar on racism in the auditorium of Our Lady of the Holy Souls Church in Little Rock in February 1963. (Courtesy from the Butler Center for Arkansas Studies, Central Arkansas Library System)
Reacting to his involvement with migrant workers, the Church sent Biltz back to Arkansas, where he worked for a year on staff at the Catholic Student Center at the University of Arkansas in Fayetteville and as associate pastor of the university parish. In Fayetteville, he continued his work with the United Farm Workers, organizing and chairing the Lettuce Boycott Committee, and served on the Diocesan Hospital Ethics Commission before leaving to complete classes for his second master’s degree – this one in studies. on the aging of the North. Texas State University in Denton, Texas, followed by a residency at the Isabelle Geriatric Center in New York.

From 1975 to 1978, Biltz served in Arkansas as resettlement director of the Diocese of Little Rock’s Indochinese Refugee Resettlement Program; diocesan coordinator of “Freedom and Justice for All – Call to Action”; and Associate Director of Catholic Charities and Social Services. Biltz was co-founder of the Arkansas Coalition to Abolish the Death Penalty (1977); served on the Planning and Program Committee of the Arkansas Chapter of the National Conference of Christians and Jews, now known as Just Communities of Arkansas (1976-1985); and helped organize the Arkansas Interfaith Task Force for Central America (1980).

Biltz’s commitment to social justice, which was unpopular with Church officials, continued into the later years of his career. In 1983, Biltz made headlines by accompanying anti-nuclear weapons protester James Sauder to a Titan II missile silo, where Biltz prayed while Sauder sprinkled holy water. In 1985, Biltz was among those arrested while demonstrating against apartheid outside the South African Embassy.

Biltz died of a heart attack on November 29, 1987. Upon his death, Msgr. Royce Thomas, vicar general of the Catholic Diocese of Little Rock, was quoted in the Arkansas Democrat as saying that Biltz “was a voice for the voiceless and a champion for the downtrodden. He tried to help those who couldn’t help themselves.” In a retrospective published in Arkansas Catholic 30 years after his death, Msgr. John O’Donnell said of Biltz, “He went from a little altar boy with shiny shoes and combed hair to a revolutionary.”

This story is adapted by Guy Lancaster from the Encyclopedia of Arkansas Online, a project of the Central Arkansas Library System. Visit the site at encyclopediaofarkansas.net

Gospel in the Art: I am not worthy to have you under my roof