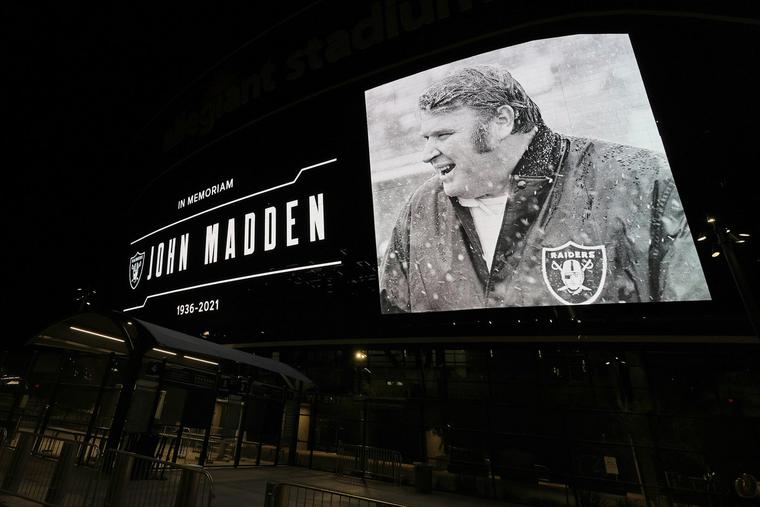 John Madden, a Happy Death and the Communion of Saints | National Catholic Registry

At the annual National Football League Awards, it is customary to remember those who have recently passed away in a combined video montage. Last Thursday, however, a man was chosen for a special report: John Madden.

Madden coached the Oakland Raiders for 10 seasons from 1969 to 1978, won a Super Bowl and had the best winning percentage of any coach in NFL history who coached at least 100 games. After an early retirement at 42, he became most famous as a television commentator for nearly 30 years. He was the best in his profession, better than anyone at explaining the game and sharing the fun, providing both education and entertainment.

He was the first to use the “telestrator”, thanks to which commentators can describe the play on the screen. He didn’t invent the word “boom”, but he made it his own – a noun, an adjective or a verb as needed, sometimes all at once. More than any player, he became the face of football at a time when the NFL was beginning its rise to professional sports supremacy.

His claustrophobia rendered him unable to fly, so he criss-crossed the country in a specially equipped luxury bus – the Madden Cruiser. People would follow him for miles on the highway, just to be part of the phenomenon.

As his colleagues flew first class from one five-star hotel to another, the Madden Cruiser stopped at a restaurant in rural Nebraska. He was, in the words of one admirer, “America’s ambassador to itself,” seeing the country missed by much of the elite class.

Larger than life, he championed the working-class approach to life. He changed the way Americans observe their distinctive national holiday, introducing generations to the Thanksgiving “turducken” – a stuffed chicken in a stuffed duck in a turkey, all best eaten by hand.

“He was a footballer,” NFL commissioner Roger Goodell said when Madden died at age 85 last December. “There will never be another John Madden, and we will be forever indebted to him for everything he did to make football and the NFL what it is today.” He did more than almost anyone else.

I don’t know anything about Madden’s religious faith, but as Super Bowl Sunday brings more memories of him, there are two lessons we could take for Christian discipleship — a happy death and the Communion of Saints.

Madden died “unexpectedly”, it was reported. As for the sanctity of his death, I cannot say, but the death granted to him by Providence was happy.

Last year, Fox Sports prepared a documentary about the life of the coach, all crazy. It was, in secular terms, pure hagiography. Not a discouraging word was to be heard. This is not unusual in tribute documentaries, especially those that require the subject’s cooperation. What was unusual all crazy was that it included many images of Madden himself watching others talk about him. It was like being able to attend your own wake.

The documentary premiered on Christmas Day. Madden gathered his close family around him, wife Virginia, children and grandchildren, to watch it, an examination of a life lived with a dedication to hard work and excellence, with an appreciation for many many blessings along the way.

It served as an extended and anticipated eulogy. Madden would be dead two days later.

The Catholic tradition of praying for a happy death includes, above all, the reception of the sacraments, but it also includes natural blessings – a lack of suffering and pain, the presence of loved ones, an opportunity to look back and be thankful for God’s goodness.

On a natural level, Madden achieved this happy death, well beyond his biblical three points and 10 (or four points for those who are strong), surrounded by his family and the love and esteem of his friends, professionals and personal.

I don’t know what Madden thought of the Communion of Saints but, in his inimitable way, he gave us an earthly vision of what it might look like. This was on the occasion of his induction into the Pro Football Hall of Fame in 2006. Members of the Hall of Fame are commemorated with a bust in the Halls of Honor.

“You have to stay with me for a while on this one,” Madden said, operating oral without using a telestrator:

It’s a little goofy here. … But I started thinking about it after I got elected to the Hall of Fame. The more I think about it, the more I think it’s true. Now I know it’s true and I believe it.

Here’s the deal: I’m thinking of the Hall of Fame, that during the day, people walk by, they watch everything. At night, there is a time when they all leave. All fans and visitors leave the Hall of Fame. Then there are only the workers. Then the workers start leaving. This is like saying that there is only one person. This person turns off the light, locks the door.

I believe that the busts talk to each other. I can’t wait for this conversation, I really can’t. Vince Lombardi, Knute Rockne, Walter Payton, all my ex-players, we’ll be here forever and ever and ever talking about whatever. That’s what I believe. That’s what I think will happen, and no one will ever talk me out of it…

In football terms, Madden is thinking about talking football and life with Lombardi. In celestial terms, it is a question of speaking with Saint John the Apostle of the Holy Mother in his house, or Saint Augustine of his own mother, or Saint Francis Xavier of carrying the Gospel to the ends of the earth and the fascinating and frightening sites. he saw on the way. It is a matter of listening to the private conversation that Saint Josephine Bakhita had with the future Saint Pius X in Venice, or those numerous encounters that we have seen between Mother Teresa and Saint John Paul II. Better than the busts talking to each other are the bodies and souls themselves at the end of the story.

For generations of Sundays, football fans have spent their afternoons with John Madden. In the light of the Day of the Eternal Lord, may he rest in peace.

10 money mistakes and how to fix them