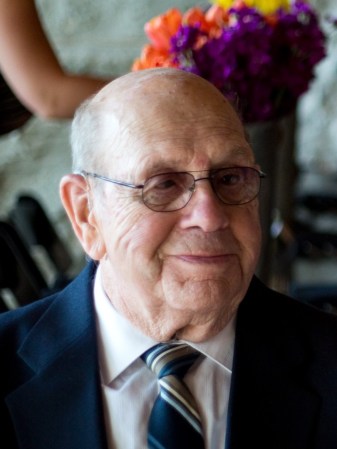 John Ernest Heimerman, 97, of Blooming Prairie, Minnesota, died Monday, June 27, 2022 at Prairie Manor Care Center in Blooming Prairie, Minnesota. On December 14, 1924, John was born to Michael and Anna (Rauen) Heimerman in Stacyville, Iowa. He attended country school until 8th grade. On September 25, 1946, John married Thresia Schmidt at St. Peter’s Catholic Church in Rose Creek, Minnesota, and they had nine children. John farmed until 1974 when the family moved to Albert Lea. While at Albert Lea, John worked for Smitty’s Glass until 1990. The two then returned to Blooming Prairie in 1995. The couple loved to dance and belonged to the Stateline Polka Club and the Polka Lovers Club of America. John enjoyed listening to old music, watching Twins games, and was a Minnesota Vikings fan. He was a member of St. Columbanus Catholic Church, Blooming Prairie, MN, the Eagle’s Club and the Moose Club. John will be sadly missed by all who knew and loved him.