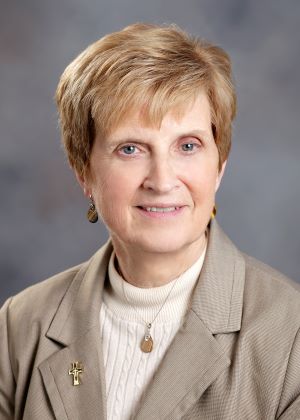 Jean Messaros, RSM, retired Vice President for Mission Integration at Misericordia University, received the Catherine McAuley Medal at the University’s opening ceremony on August 26, 2021. The McAuley Medal is awarded by the board of directors and is the highest honor of Misericordia. He recognizes the important service to others in the mind of Catherine McAuley, the founder of the Sisters of Mercy. The award also recognizes a lifelong commitment to the ideals and goals of the University and the values â€‹â€‹to which it aspires.

A member of the Religious Sisters of Mercy for 55 years, the native of Branchdale, Pa., Began her service at Misericordia as an assistant to the dean of students in 1975. After serving in a leadership position for the Dallas Mercy Community, she returned to Misericordia in 1990. as Assistant Dean of Students and was subsequently appointed Dean of Students. Promoted to Vice President of Student Affairs in 2006, she was responsible for overseeing all extracurricular student services, including student activities, counseling, athletics, court affairs, campus ministry, residence life, counseling and career services.

In 2013, Sister John assumed the role of Vice President for Mission Integration, responsible for the integration of mission and mercy throughout the university community. She held this position until her retirement and worked closely with faculty, staff and students to strengthen the university’s commitment and understanding of Catholic traditions and the institution’s mercy. Misericordia was founded by the Religious Sisters of Mercy in 1924 and is one of the 17 colleges and universities that make up the Conference for Higher Mercy Education (CMHE).

In 2000, Sister Jean established the Women with Children program, one of eight such programs across the country that offers single mothers who are graduates the opportunity to earn their bachelor’s degree while living on the Misericordia campus with their children. The program was renamed the Ruth Matthews Bourger Women with Children Program in 2011 and expanded to two homes with the support of the late Pauly Friedman and his family. A third house was added in 2016 with support from the Robert Y. Moffat Family Charitable Trust of Lackawanna County. The Friedman family have announced their support for a fourth house on campus.

The Bourger program received high praise from Pennsylvania Governor Tom Wolf, who visited the campus in January 2019 to announce that he was modeling a new statewide â€œParents Pathwaysâ€ initiative after the Bourger Women with Children program , to use education to end the cycle of poverty in the Republic.

Dallas Borough resident Sister Jean celebrated her 50th birthdaye Jubilee as Sister of Mercy in 2016. At that time, friends and family created an endowment for the Sr. Jean Messaros ’73 scholarship for women with children, which annually helps a female student entering the program. In January, she announced her retirement from college, effective June 30, 2020. She is estimated to have had a direct impact on the lives of over 12,000 students throughout her career.

Sister Jean received the Frances Warde Medal from CMHE and the Reverend Jule Ayers Community Service Award from the Wilkes-Barre Kiwanis Club for her work in establishing the Women with Children program. She is also the recipient of the 2009 Sister of Mercy Award, presented by the Alumni Association of Misericordia University. The award is presented, from time to time, to a Sister of Mercy who has rendered outstanding service to the university and / or has demonstrated and sustained professional achievement.

Sister Jean was recently named a finalist in the WBRE-TV and Nexstar Broadcasting competition, â€œNEPA’s Most Outstanding Women,â€ one of four women honored for their exceptional leadership and dedication to their communities.