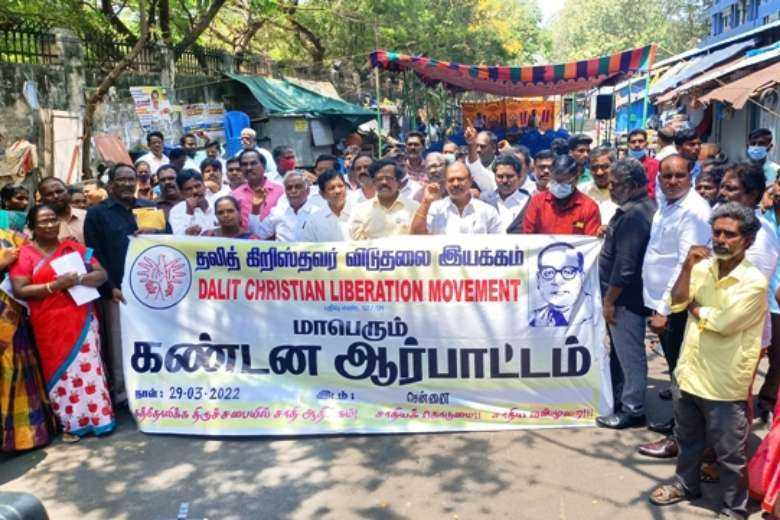 Some 75% of Catholics are former Dalits, but only two out of 31 archbishops and 11 out of 180 bishops are Dalits.

Dalit Catholics hold a protest against the appointment of an upper caste Archbishop of Pondicherry-Cuddalore in Chennai on March 29. (Photo provided)

Dalit Christians staged a protest march against the recent appointment of a non-Dalit as Metropolitan Archbishop of Pondicherry-Cuddalore in the southern Indian state of Tamil Nadu.

“It is resolved to strongly condemn the appointment of Bishop Francis Kalist and also resolved to stop his planned consecration on April 29,” said Mr. Mary John, President of the Dalit Christian Liberation Movement (DCLM), which organized the march in the state. capital of Chennai on March 29.

keep up to date Don’t miss the latest news

He also demanded that the Apostolic Nuncio revoke the appointment of Bishop Kalist and that the Catholic Bishops’ Conference of India (CBCI) immediately grant 64% representation to Dalit Christians as per its policy given their numbers.

Some 75% of Indian Catholics are former Dalits or untouchables, but only two out of 31 archbishops and 11 out of 180 bishops are Dalits. In Tamil Nadu-Pondicherry, only one of the 17 bishops is a Dalit, John said.

“This same scam is replicated when it comes to positions of authority in Catholic institutions, educational and employment opportunities, or access to financial resources, although CBCI’s Dalit policy ensures a 64% Dalit representation,” John alleged.

The Archdiocese of Pondicherry-Cuddalore had been vacant since the resignation of Archbishop Antony Anandarayar on January 27, 2021, and the new appointment made by Pope Francis was announced on March 19.

The DCLM called on the Vatican to stop appointing only upper-caste bishops and archbishops in India, as a sign of respect for the country’s secular, democratic constitution and principles of social justice.

The organization further called on central and provincial Indian governments to step in and end the continuing caste discrimination faced by Dalits within the Catholic Church, even if this means enacting a special law. .

“Dalits in India have seen the dawn of day since the adoption of the constitution. But Dalit Christians have yet to see the dawn of day in the Catholic Church of India,” John said.

The word Dalit means “trampled” in Sanskrit and refers to all groups once considered untouchable and outside the Hindu four-tier caste system.

Government data shows that some 201 million of India’s 1.3 billion people fall into this socially disadvantaged category. Some 60% of India’s 25 million Christians come from disadvantaged Dalit and tribal backgrounds.