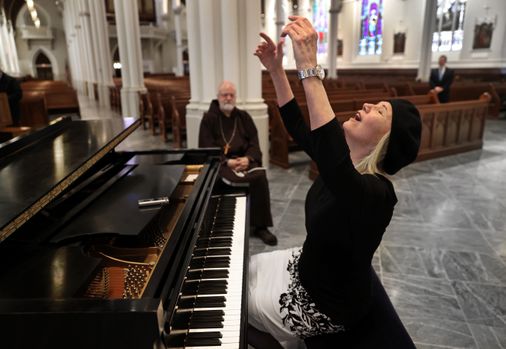 In the echoes of history, a story of humanity, of hope

But Golabek’s hauntingly beautiful music is something of a time machine.

And it takes him back to the late 1930s, to war-torn Europe during one of humanity’s darkest episodes, when the murderous Nazi regime was in its most utter and terrible fury.

She tells the cardinal the same story her mother told her when she was little in Vienna.

About Kristallnacht, the night of broken glass.

“Families were desperate to get a seat on what was known as the Kindertransport – or the children’s rescue train,” she tells Cardinal O’Malley between piano notes. “My grandfather came home one night from a poker game and told his family he had gotten a ticket. Three girls. Who would they choose?”

There was an argument – an argument that Mona’s mother sought to avoid by sitting down and playing the family piano.

Finally, and in tears, he was told. She had been chosen.

“As she walked to the train with her mother hand in hand,” Golabek told the Cardinal, “her mother took her face in her hands and said, ‘I want you to make me a promise. Promise me you’ll keep your music. And never let go.

“’And I’ll be with you every step of the way. With every sentence, with every note, my darling, I will be with you. And I love you.’ ”

What followed is a terrifying story for the ages, a dark and deadly story now preserved on the pages of the history books and part of the long arc of humanity.

She is the daughter of Lisa Jura, concert pianist, and French resistance fighter Michel Golabek. His mother was one of 10,000 Jewish children brought to England before World War II as part of the Kindertransport, a mission to rescue children threatened by the Nazis.

Mona’s mother was rescued, but Mona’s maternal grandparents were murdered at the Auschwitz death camp. His two sisters miraculously survived.

Golabek commemorated the story herself, authoring a memoir on surviving World War II titled “The Children of Willesden Lane,” a copy of which she presented to Cardinal O’Malley last week.

There are echoes here of what is currently happening in Ukraine.

“You see the kindness and the love that comes out of people in the face of all this evil,” O’Malley told me. “And that’s a sign of hope. We certainly see it in today’s world in the way people react to refugees.

“And, of course, Mona’s message is so important because prejudice and hatred are things that are taught to children. And it’s like an inherited disease that is passed down from generation to generation. So teaching children young people to love and feel their humanity and their connection to all members of the human family is such an important message.”

This message is now being shared in Catholic schools across the Archdiocese through a pilot program involving more than 6,000 schoolchildren like those at St. John Paul II Catholic Academy in Dorchester, where the children – dressed in pleated plaid skirts or in white shirts and blue pants – in the school gymnasium greeted Golabek with a standing ovation the other day when he visited after his performance at the cathedral.

“Follow your dreams,” Golabek told the schoolchildren. “Be someone who stands up for what is right in life. Follow your dreams. We must unite as one human family. And, of course, what is happening in Ukraine – in Russia – right now is just heartbreaking.

“But at the same time, these terrible events – like the Holocaust itself – bring out the worst and the best in people.”

Mona Golabek learned this lesson firsthand. And that’s what makes his performances so powerful. And, given today’s headlines, so real and so relevant.

She kept the promise her mother made to her grandmother. She never let go of her music. It became the rhythm of his life. His lyrics preserve his powerful personal story.

“Sometimes I ask myself: how to continue? ” she says. “It’s exhausting, demanding, stimulating. But there are angels coming along the way.’

Angels love financial benefactors. Like devoted teachers. Like committed members of the clergy. Like the people in the pews who know very well the power of prayer.

“They are linked to prejudice, racism, prejudice, bullying. And they applaud the story of a Jewish World War II teenager who clung to her dream and her faith. And did. Ultimately, it’s a story of humanity from man to man. I am alive today because this generation saved another generation.

And that’s why, in partnership with the USC Shoah Foundation, she tells her story.

“We’re on a mission to bring this story to the world,” she said.

Her powerful story about a girl who survived the Holocaust, became a bestselling author, and now sits at the piano playing a song of hope for the Archbishop of Boston.

When she was done playing for the Cardinal, Golabek paused briefly as the pale, almost spring-like sunlight streamed through the stained glass windows.

“Music will give you strength,” she said, then said calmly to Cardinal O’Malley:

“Thank you for one of the greatest honors of my life.”

The cardinal smiles. He nodded. And then sent this mute message: The honor is all mine.

Thomas Farragher is a columnist for The Globe. He can be contacted at [email protected]

Through her mission of mercy, the Catholic Church is a treasure trove of second chances