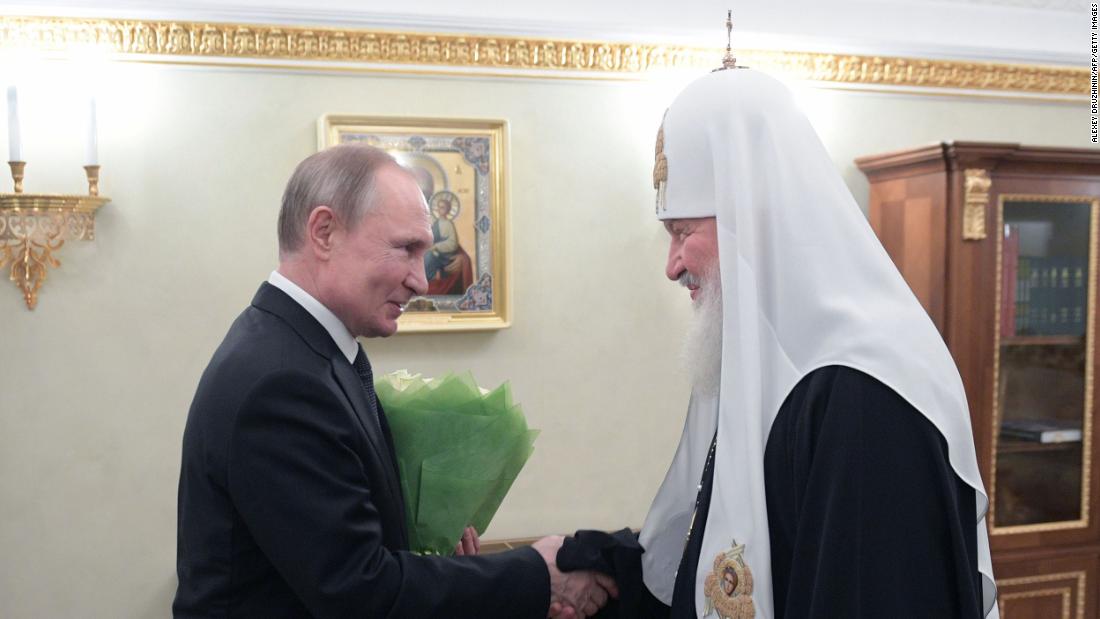 The high-ranking priest of the Russian Orthodox Church, meanwhile, offered a very different reason for the invasion: gay pride parades.

Still, experts say Kirill’s comments offer important insight into Putin’s broader spiritual vision of a return to a Russian empire, in which the Orthodox religion plays a central role.

However, the tough stance of the Russian patriarch is also costing him supporters. The Russian Orthodox Church in Amsterdam announced on Sunday that it was cutting ties with the leader, just the latest in a number of priests and churches abandoning Moscow because of the war in Ukraine.

“Putin put forward this concept of the so-called Russian world and this concept is grounded in Russian Orthodoxy,” Victoria Smolkin, associate professor of history at Wesleyan University, told CNN.

Putin’s vision is supported by Kirill, who also views Ukraine as an integral and historic part of his Russian church, Georg Michels, a history professor at the University of California Riverside, told CNN.

“At the start of the war, Patriarch Kirill delivered a sermon in which he emphasized the God-given unity of Ukraine and Russia,” Michels said in a statement. Interview with UC Riverside News.

“Kirill exposed the ‘forces of evil’ in Ukraine who seek to destroy this unity,” Michels explained.

Last Sunday, Kirill went further during a sermon in Moscow when he specifically linked these “forces of evil” to gay pride events.

According to the patriarch, the war in Ukraine is about “a fundamental rejection of the so-called values ​​that are proposed today by those who claim world power”, i.e. the West.

The “test” of which side you are on, Kirill said, is whether your country is ready to hold gay pride parades.

“If we find violations of [God’s] law, we will never accept those who destroy that law, blurring the line between holiness and sin, let alone those who promote sin as an example or as one of the models of human behavior,” Kirill said. this subject today, there is a real war,” he added.

Kirill’s speech denounced the infiltration of Western liberal values ​​into the hearts and minds of what he said were historically unified and orthodox Ukrainian and Russian peoples.

“He says there’s a clash of civilizations and the gay pride parades in this narrative are a litmus test of which side you’re on,” Smolkin said.

Despite calls for Kirill to denounce Putin’s war, the “Russian Pope” not only refused to do so, but instead lent moral legitimacy to the invasion by calling it a struggle of “metaphysical significance”, of mankind choosing to follow the laws of God.

“The Russian Orthodox Church provides much of the symbolism and ideology that Putin used to cement his popularity,” Michels added.

The city of kyiv is highly symbolic for Putin and Kirill because of its connection to Vladimir I, a medieval ruler of Kievan Rus’ – a territory that included parts of present-day Ukraine and Russia – who converted to Christianity in about 988.

“According to the now dominant Russian nationalist view, Vladimir was the founding father of the first Russian state and of the Russian Orthodox Church. State and Church formed a productive symbiosis, and Kyiv (or Kyiv) became the cradle of Russian civilization,” wrote Michels. .

“Putin considers Vladimir the savior of Russia,” Michels told CNN. “For him, kyiv and Crimea, where Vladimir was baptized, are sacred Russian lands.”

The Christianization of Kievan Rus’ is the founding narrative on which Putin and Kirill claim Ukraine as part of Russia.

“They’re trying to wrest this legacy of Kievan Rus’ for Russia and it’s a really essential part of Putin’s view of history and the role of Russian Orthodoxy in that history,” Smolkin said.

“What Putin is claiming is that he is restoring the natural order of things given by God: that Ukrainians and Russians have always been one people and they all know it because they are all from Kievan Rus and that they are all Orthodox.”

Kirill’s speeches also reinforced this idea of ​​Western powers interfering with the historical unity of Russians and Ukrainians.

Three days after Russia invaded Ukraine, Kirill said in a speech: “We must not let dark and hostile external forces laugh at us, we must do everything to maintain peace between our peoples and at the same time protect our common historic homeland from all outsiders”. actions that can destroy this unit.”

Smolkin says Kirill’s rhetoric aims to show that the division between Ukrainians and Russians has been sown from outside.

She characterizes the Russian nationalist theory of the patriarch thus: “If the Ukrainians think that they are a different people from the Russians, it is only because they have been misled by the West which has sown discord between these brothers and harmonious sisters.

In 2016, after the invasion of Crimea, a monument to Vladimir was erected in central Moscow. Before that, the other great monument of Vladimir, erected in 1888, stood in the center of kyiv.

Trouble in the ranks

“For Patriarch Kirill,” Michels said, “it’s a matter of life and death.”

Since the start of the war in Ukraine, there are even more signs of growing discontent within the wider Orthodox ranks.

The Russian Orthodox Church in Amsterdam announced on Sunday that it was severing ties with Kirill and the Moscow Patriarchate over the latter’s stance on the war.

“This decision is extremely painful and difficult for everyone involved,” St. Nicholas of Myre Church in Amsterdam said. wrote on his site.

Some 300 Orthodox priests and deacons, many of whom live and work in Russia, also risked disobeying their leader and their country by publicly signing a letter calling for an immediate ceasefire.

“The Church is not a communist party that speaks only through its leader,” said Russian Orthodox priest Father Andrey Kordochkin, dean of St. Mary Magdalene Cathedral in Madrid and signatory of the letter. .

Kordochkin noted that the letter mentioned the word “war” four times; a word that is now illegal to print in Russian media.

“It’s an act of bravery,” he said, “especially for those who are physically in Russia, because we have families and are very vulnerable.”

“I am inspired by Russian exiles of the 20th century,” Kordochkin added. “I’m on a good list.”

The board of bishops of the Ukrainian Orthodox Church, which is still linked to the Moscow Patriarchate, called on Kirill to ask the Russian government to stop the war.

“Your Holiness! We ask you…to call on the leadership of the Russian Federation to immediately end the hostilities that are already threatening to escalate into world war,” the bishops wrote in an open letter Feb. 28.

Another Ukrainian Orthodox leader, Metropolitan Epiphanius, whose church is independent of Moscow, had even stronger words.

“The spirit of the Antichrist is operating in the head of Russia,” he wrote in a February 27 statement. “That was Hitler in World War II. That’s what Putin has become today.”

In a significant act of distancing from Kirill, 12 Russian Orthodox dioceses in Ukraine removed his name from their prayers during the Divine Liturgy, on the instruction of their bishops.

Pope Francis has so far refrained from calling on Kirill to condemn the war, and has not publicly condemned Putin or Russia by name, despite his fervent calls for an end to the war.

Other Catholic Church officials, however, are not so reluctant.

The president of the Polish Catholic Bishops’ Conference, Archbishop Stanislaw Gadecki, wrote a letter directly to Kirill, writing on March 2: “I ask you, brother, to call on Vladimir Putin to stop the senseless war against the Ukrainian people “.

He also asked Kirill to urge Russian soldiers to reject their orders, saying “refusing to follow orders in such a situation is a moral obligation.”

Father Antonio Spadaro SJ, a close adviser to Francis and editor of the semi-official Vatican and Jesuit newspaper “La Civilta Cattolica” expressed what many in the Catholic and Orthodox world are wondering at this time.

“The question of all questions is, what does Patriarch Kirill do and what will he do?” Spadaro said in an interview with Italian news agency Adnkronos last week.

This question, given Kirill’s statements so far, seems to have been amply answered.