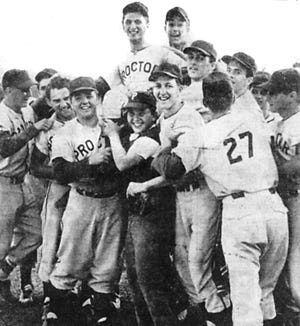 Two hundred years ago—May 26, 1812—the New York State Board of Regents issued a statement declaring “that a college…shall be and is hereby founded and established and is named Hamilton College.” College trustees then appointed Azel Backus as Hamilton’s first president. He was from Norwich, Connecticut, and graduated in 1787 from Yale College.

The college’s beginnings date back to 1793 when the Reverend Samuel Kirkland founded Hamilton-Oneida Academy in Clinton. It was named for Treasury Secretary Alexander Hamilton, who had agreed to serve as a trustee on the academy’s board. The first class entered a small schoolhouse at the foot of (now) College Hill. The class included four Native American children and 25 children of local settlers.

In other news, St. Elizabeth College of Nursing selects its top students: Majors of the Week – Heather Marusic of Herkimer and Christopher Money of Utica. Major of the Weekend Class – Leanna Sweet from Rome. Weekday Salutatories – Marie Burr of Woodgate and Jennifer Curtis of Utica. Weekend Greeting – Charles Oliver from Waterville.

USA Sewing, on Broad Street in Utica, receives a $3.5 million contract from the military to make Kevlar gloves and will hire about 100 workers to do the job. Typically, the company’s workforce is cyclical and it adds employees when an order is received. U.S. Senator Charles Schumer, D-NY, said the company won the contract for the flame-retardant gloves “because of its track record of excellence.”

Area communities are on the march as they observe Memorial Day with parades drawing crowds. Marybeth Kempeny of New Hartford is at the parade in Utica and says, “My dad served in World War II and passed away 12 years ago today. Today was also his birthday, so this day has more of a commemorative purpose for us than anything else.

Carl Ciccarelli, a color guard with the Whitestown Foreign Wars Veterans, said: “Today is a very special day. It is a day for veterans who have been lost in wars. More people should come out and realize the price these veterans paid.

In high school baseball, Chris Morse and Shaun Sergott each had two hits to lead Oriskany to a 6-3 win over Poland. Meanwhile, West Canada Valley beat Frankfort-Schuyler, 7-4, behind pitcher and batter Seth Crossett (a six-batter with 16 strikeouts and a two-run homer). Jonah Margulis added a single, home run and two RBIs and Dan Petkovsek had two hits.

William E. Burke of Utica is elected state deputy to the New York Knights of Columbus Council at its 52nd annual meeting in Jamestown. It is the highest position a lay Roman Catholic can hold in the state.

Utica city historian Abigail C. Dimon says 3,029 war medals have been distributed to city veterans so far. The city decided to honor veterans with a medal after the end of the World War in 1918.

Thomas James, who was born in Utica in 1831 and 50 years later was appointed U.S. Postmaster General by President James Garfield, speaks at a meeting of the Oneida County Historical Society (now the Oneida County History Center). It is introduced by Thomas R. Proctor, who says with a smile, “I hope the Postmaster General will explain why important letters are sometimes delayed for weeks while my bills arrive promptly on the first of every month. James, also smiling, has no answer.

Answer to last week’s question: In the presidential election of 1856, John Charles Fremont became the top candidate of the newly formed Republican Party. He was defeated by Democrat James Buchanan. The Republican Party had been organized in 1854. Fremont was well known to most Americans as an explorer. He once led an expedition that explored, surveyed, and mapped most of the country between the Rocky Mountains and the Pacific Ocean. In 1860, Abraham Lincoln became the first Republican to be elected president.

This Week in History is researched and written by Frank Tomiano. Email him at [email protected]