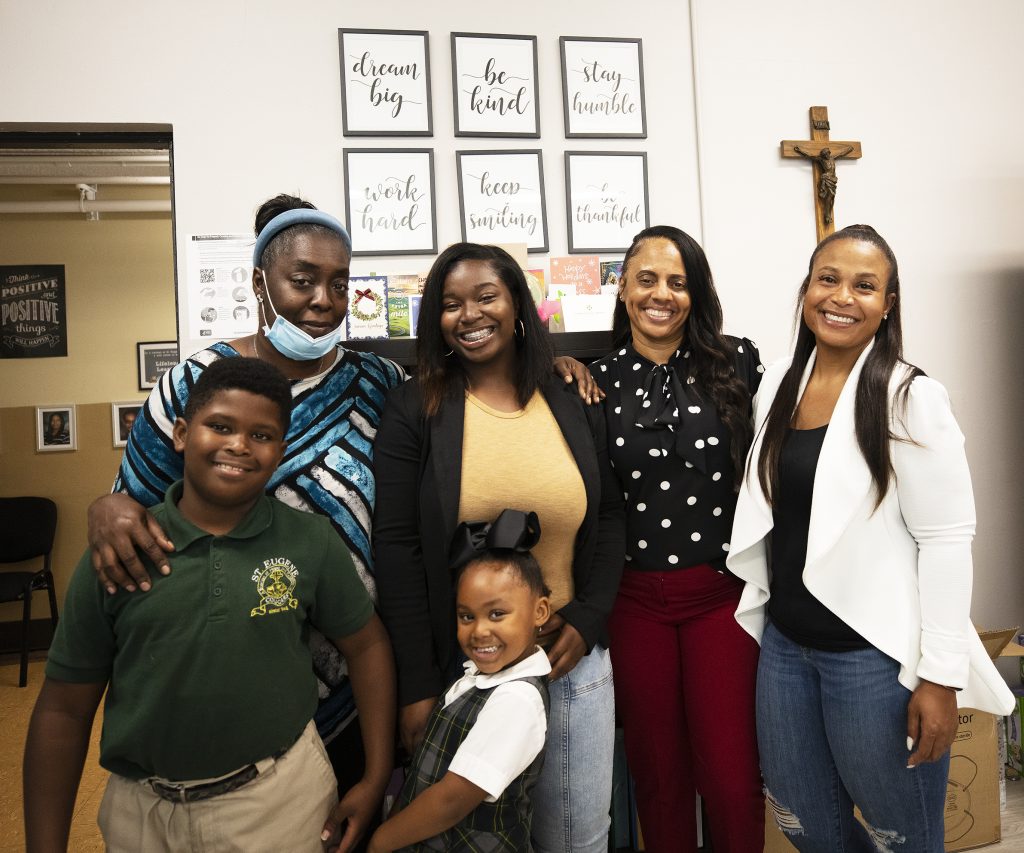 The sisters will tell you that there is nothing extraordinary about them. Well, actually, Kamaryn and Kailee will. Karter is more likely to smile or laugh, then draw your attention to his image on a poster promoting St. Eugene School in South Los Angeles.

What has drawn attention to them this graduation season is really not extraordinary: the fact that the three sisters are graduating from different levels of education this year is simply an accident of birth days and academic intervals. What is not accidental is the solid basis that Saint Eugene gave them to go far—very far.

Kamaryn Johnson graduated from Northwestern University outside of Chicago and will continue her graduate studies at USC. Kailee Johnson is a graduate of Santee High School just south of downtown and will be attending UCLA in the fall. Karter Cotton is a graduate of St. Eugene Kindergarten, where a life-size image of her adorns a poster that hangs outside the school. The 5-year-old is literally the face of the school.

Kailee has been recognized as valedictorian of Santee, an honor Kamaryn received from the school four years ago. Kailee, who attended St. Eugene from transitional kindergarten through eighth grade, will speak at the school’s graduation ceremony, which Karter will be attending.

“I’ll tell them it’s okay to be nervous about this next step,” Kailee said. “It’s okay because they have a good support system here in St. Eugene that they can always come back to and give them any help they need.”

Kamaryn Johnson, a recent graduate of Northwestern University, attributes her family’s success to the diligent example of her grandfather, Lloyd Gamble. (photo sent)

Kamaryn, who attended St. Eugene from kindergarten to grade 8, spoke at the school’s graduation four years ago. This ceremony included her brother, Michael, who graduated from kindergarten. Now, in a few months, Kamaryn will return to St. Eugene to teach transitional kindergarten while beginning graduate school.

“I saw her interaction with the kids when she came back to speak at graduation and thought that made sense,” principal Celynda Wilder Kingsby said. “She has the qualities you need to teach young children: she is brave, fun, caring, patient and caring. She grew up here and now she is coming back to give back to the community. These are the stories you want to hear, is not it ? “

Kamaryn is rambunctious and funny, Kailee a little more reserved with a dry sense of humor, Michael is calm and a gifted basketball player. And Karter?

“Karter is probably one of the smartest people I know,” Kamaryn said. “There’s this 17-year gap between us, but you can see she’s watching us, picking things up.”

Their mother, Kaci Johnson, holds multiple postgraduate degrees and is the Dean of Students at Santee High School. She is often credited with the lion’s share of her children’s success, with her clear expectations, discipline and constant support being the most often cited.

If you ask Kaci why they are successful, she will dismiss any talk of extraordinary intelligence. On the contrary, his children work very hard. And she knows where they got that from.

“Their grandfather has a sixth grade education because he had to quit school to pick cotton,” Kaci said of her father, Arkansas native Lloyd Gamble. “My dad worked harder because he wanted to prove something to everyone. He always kept us humble by working hard.

His daughter said Gamble continues to set that example. At 72, he still works full-time as a landscaper, rising early each morning to trim trees and mow lawns.

“He is the hardest worker I know and thanks to him, my children know that education is not strength. It’s a work ethic, because they know their grandfather, who didn’t have an education, outdid so many people who did.

This mentality, passed down from generation to generation, makes Kaci’s children “ideal students,” said Stephanie Thomas, Karter’s kindergarten teacher who taught each of the siblings at one time. “They’re easy to love, easy to teach because they can’t wait to receive it.” 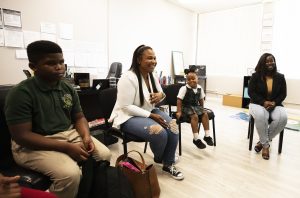 For Kaci, St. Eugene has been a constant presence throughout the Johnson/Cotton family’s success story, a place where heritage born in the fields of Arkansas has been added. It’s a place she could always count on to raise her children, keep them safe, build their confidence, and teach them things that couldn’t be taught in public schools.

“St. Eugene is our village,” she said. “I always know they will protect my babies and instill in my children from an early age self-esteem, self-defense, as well as morality and the love of God.”

Kamaryn said she was “super excited, super blessed” to be back teaching at the school.

She’s not the only one. Thomas said Karter had recently walked into his class and announced, “You know. This is my sister’s class.

“For me, the small community meant you had a more personal relationship with everyone,” she said. “I knew everyone at school. In my high school, after four years, I still meet people I don’t know in my class. [St. Eugene] was like a refuge.

Naturally, the family faces a busy graduation month. They will all travel to Illinois to attend Kamaryn’s graduation, but since Kailee’s graduation is shortly after, Kamaryn will have to forgo several other graduation ceremonies to attend Kailee’s. his sister.

Likewise, Kailee will have to give up some late-night activities in order to go — where else? – St. Eugene, for an awards ceremony involving Brother Michael. Do any of them care? Kailee said it best.

“That night, I’ll be the one to cheer Michael on the hardest.”

I believe (The Apostles’ Creed)