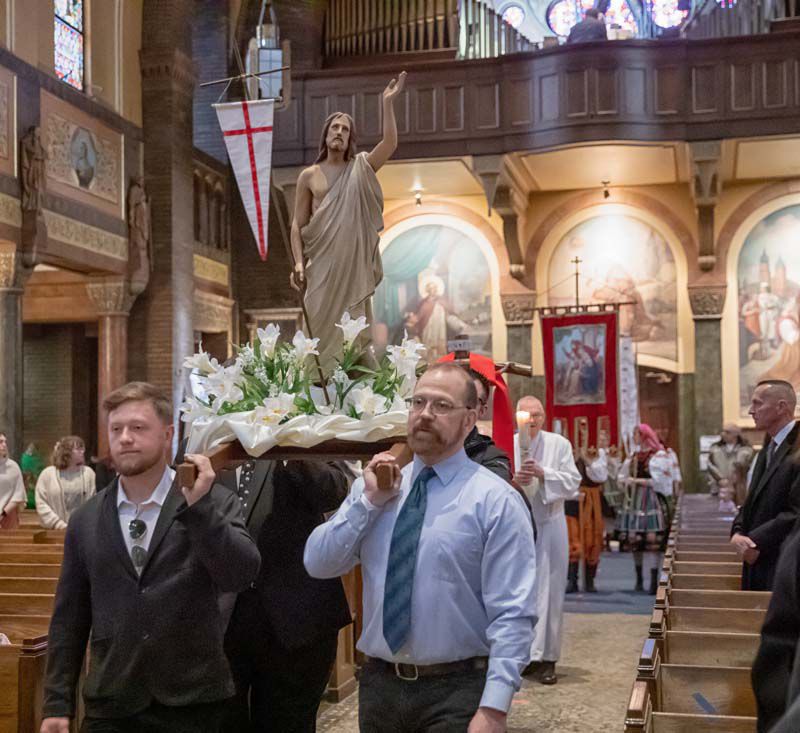 “Easter is always a gala day among Poles all over the world.”

By Elizabeth J. Hayes On Apr 25, 2022
Share
Over the past week, the Polish community has welcomed the opportunity to celebrate Easter and its promise of new life. After coping with the Covid-19 pandemic for more than two years, many have cautiously chosen to resume honored traditions like attending sacred liturgies, blessing Easter baskets and even Dyngus Day. But Easter 2022 was not the first time Polonia had returned to treasured customs that had been restricted in previous years.

Large numbers of Polish immigrants began arriving in Western New York around 1870. For several years, they did not have the benefit of a resident priest who was familiar with Poland’s Easter traditions. Then, in June 1873, Bishop Ryan ordained a young Polish seminarian by the name of John Pitass and quickly assigned him to serve as pastor of a new parish named in honor of Saint Stanislaus, bishop and martyr.
At the time of its formation, Saint-Stanislas had no building or location. In January 1874 the church opened a chapel on Peckham Street, near the site of its present church. As reported in The Catholic Union and Times, this house of worship was 40 feet wide and 94 feet deep. Nevertheless, for many in the congregation, the Easter celebrations of 1874 provided an opportunity to resume holiday traditions after a hiatus of several years. In 1875, Buffalo residents began to notice a special spirit of Easter joy among their Polish neighbors.
Easter in 1875 fell on March 28. In its next day’s edition, The Buffalo Morning Express published the following report of a visit to St. Stanislaus Church:
“The cozy little Church of St. Stanislaus, located in the Polish settlement near the cattle yards, was full of Easter brightness, joy and sunshine. Almost the entire congregation, numbering over five hundred people, attended the ten o’clock high mass, dressed in their newest and finest clothes, and made a very thrifty and respectable appearance. More than four hundred parishioners received Holy Communion. . . . The mass was celebrated by the Reverend Father Pitass, the energetic young pastor, who also preached an effective sermon, judging by the close attention of the congregation, on the triumph of Jesus Christ over death.
The altar that year was decorated with artificial flowers. The music came from a small organ that the parish had just acquired. The formation of a choir was still planned. Nevertheless, the Express reporter said that of all the Catholic churches he had visited, no congregation seemed “so full of devotion and genuine piety”.
On March 26, 1894, The Buffalo Courier reported that “in the Polish quarter, Easter Sunday was celebrated with devotion.” In the churches of Saint Stanislas and Saint Adalbert, the faithful overflow into the vestibules. “It was an inspiring sight to see the devout people kneeling in prayer on the bare floor, shut out of sight of the priest and the decorated altar.” Thousands of other services attended St. John Kanty. The newspaper observed that Easter was “a day of rejoicing and good humor” throughout Poland.
Thousands of American and Polish flags decorated the neighborhood. The neighborhood’s main thoroughfare was Broadway, which “at 12:30 p.m. looked like its New York namesake”. Looking “fresh, bright and happy”, the young girls were dressed in red, purple, green and blue dresses. “The women were generally well-dressed, and many wore flowers and looked as charming as possible – in keeping with their fashionable sisters on Delaware Avenue and other fine West Side streets.”
Newspaper reports confirm that Easter Sunday itself was the focus of celebrations early in the history of the Polish community in Buffalo. The April 18, 1897, Easter edition of the Buffalo Courier included remarks in Polish from Father Anthony Jakubowski, an assistant at Saint Stanislaus Church. Meanwhile, the joy of this holiday postponed to Monday, or Dyngus Day. In its April 20, 1897 edition, Le Courrier described Easter Monday as “a day of jubilation” for the Poles of Buffalo. After a morning of merriment, the participants savored a light lunch. The evening was then devoted to concerts and theatrical productions.
By the 1890s, Polish immigrants had established Easter as a quintessential celebratory time for their community. But as with the current pandemic, a smallpox epidemic would dampen Easter festivities in 1899. In its April 3 edition of that year, the Buffalo Times observed that on the evening of Holy Saturday, the waiting rooms of Polish doctors were filled with patients. get vaccinated against this dreaded disease. Nevertheless, despite this disruption, the newspaper concluded that “Easter is still a gala day among Poles all over the world”.
On April 7, 1912, The Buffalo Sunday Morning News described how parishes in Polonia observed “the age-old Polish custom of blessing the food eaten on Easter morning.” Likewise, on Easter Monday 1916, The Buffalo Enquirer reported that Polish churches in Buffalo “were packed and thousands were taking communion.” The article recounted how each of the parish choirs worked to present an exceptional musical tribute. At the Saint-Adalbert church, a multi-piece orchestra provided accompaniment. Through celebrations like these, the Polish community has established a foundation for the Easter celebrations that we witnessed again last week.