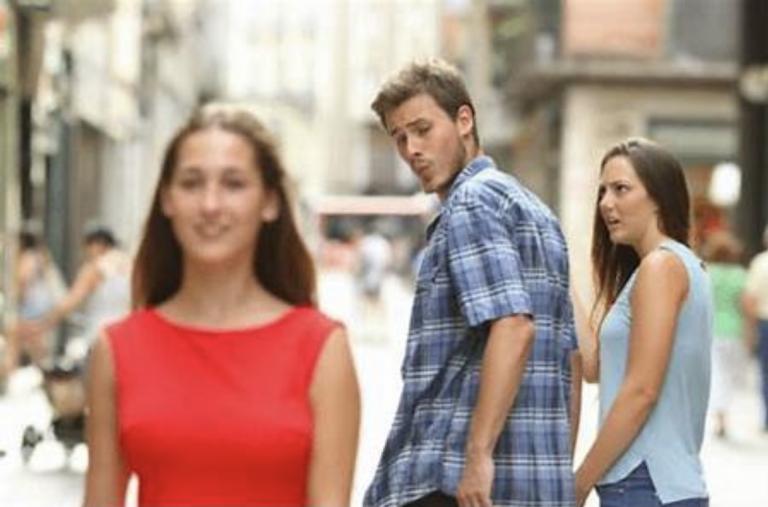 Dark Devotional: Pay attention to your own distractions

If your eye makes you sin, pluck it out; it is better for you to enter the kingdom of God with one eye than with two eyes to be cast into hell (Mark 9:47).

My godmother sighed in sadness as she told me why her husband had recently been asked to stop acting as an extraordinary minister of holy communion after many years of dedicated service. He had become a little frail and his health was poor, but he was still able to distribute Communion and liked to do so. But the parishioners complained to the parish priest that they feared her husband would stumble and drop the Eucharist. So, my godmother told me, the pastor asked her husband to withdraw from the service at mass.

On the one hand, I know that my godmother’s husband was old, fragile and in poor health. There was no reason to suspect that his death shortly after this conversation had something to do with his being kicked out of a liturgical ministry he valued and gave meaning to his life. On the other hand, I couldn’t help but wonder. We know that people die of a broken heart.

A few years later I was visiting a friend who was going to get married soon. I had been asked to be one of her bridesmaids and I was pretty excited because I had never had the chance to be a member of a wedding party. The bride happily showed off some new clothes she had recently purchased and showed me some bright red capri pants for me to admire. She loved them, she told me, but had to bring them back to the store.

It appears that she showed the pants to her fiancé and that he asked her to return them. He told her that he thought seeing her wearing those pants would be too distracting for him and an occasion for sin. So, she said, she needed to return the pants. My face was probably showing my dismay because she was suddenly reassured. Her fiancé had never asked her to do something like this before.

I didn’t say anything, I just watched him fold the cute red pants and put them aside to be returned. But I couldn’t help but think that once she returned those pants, it might not be the last time her husband-to-be had control over her choice of clothes.

My pleasure in attending this wedding suddenly waned considerably.

When I worked I usually ate at my desk during my lunch hour and I spent my break surfing the Internet. One day I came across the rules of a local traditionalist Catholic chapel for attending mass. I almost choked on my sandwich when I found this directive from the pastor: [the] Canon of the Mass, please refrain from going to the toilet. It is entertaining for most parishioners and [the pastor]. This could invalidate your attendance at Mass.

Once I managed to swallow my bite of food, I casually wondered if the pastor would grant a dispensation for what might happen to the bench if someone with an overactive bladder. does not have go to the toilet during the canon of the mass. When adults need to go to the toilet during mass, it is either because they are taking care of a small child who has to go to the potty, or because they have a medical problem that forces them to go to the potty. go . Adults usually don’t use the bathroom just to let off steam.

And since when does the need to go to the bathroom during Mass negate someone’s attendance at Mass?

When did “distractions” stop being our responsibility manage and start to become the responsibility of others to protect us? In my reading of the spiritual life, spiritual masters seem to be primarily concerned with urging Christians to strive for self-control over those things – thoughts, images, or sounds (internal or external) – that keep them away. of prayer. .

Now, everywhere I turn, someone is solemnly warning people, often in the context of women’s dress but sometimes in other aspects of daily life, that it is their responsibility to protect others from the distraction “. “Distractions” can come from children, very young or with special needs, who are loud at church. Or, “distractions” may come from clothes that are worn or not (such as headgear), whether at church or elsewhere. Or the “distractions” can even come from personal needs, like getting off the bench to use the bathroom. In the case of my godmother’s husband, he had never abandoned the Eucharist but the parishioners were afraid that he would do so because of his fragility. They were “distracted” by its fragility and said they were simply worried about the Eucharist.

The more I think about it, the more I am convinced that the Distractions Lectures are a cover for something else. What many Christians, both clergy and laity, seem to want is conformity to an aesthetic ideal. But to say that everyone should dress and behave according to a specific code of conduct for aesthetic reasons or to disappear from public view seems just as selfish and cruel as it certainly is. Instead, we receive lectures on how we have a moral responsibility to be our brother’s keeper, to protect others from distraction during liturgy, and that it is a matter of Christian charity.

No, sorry. Real distractions are the responsibility of the individual Christian to be overcome through personal self-control. One of the best ways I have found to do this during Mass is to keep my eyes on the altar or my own prayer book. In other words, I do my best to mind my own affairs at Mass and only think about the state of my own dignity to receive Communion.

Do I notice other faithful at Mass? Sure. But I think much less of them than before. And I hope they don’t think of me.

What would Jesus want us to do in the distractions? He said if your hand, or your foot, or your eye makes you sin, you should cut it off. He didn’t mean that literally, of course, but his point was that you are responsible for managing your own finicky body parts.

If you see a frail old man holding a ciborium and fear that he will drop the Eucharist, close his eyes and return to prayer. If your fiancée’s clothes “distract” you so much that you are afraid of sinning against chastity (to put it as delicately as possible for the faint of heart), stay overnight and go home to take a cold shower. And if you’re a priest who can’t seem to focus on the liturgy when a parishioner slides off a bench to go to the bathroom, then you really should find a new line of work.

What you can’t do is make your distractions someone else’s problem.

Michelle arnold was the staff apologist for Catholic responses, a Catholic Apologetics apostolate in the Diocese of San Diego, Calif., from 2003-2020, answering client questions about the Catholic Faith by phone, letter, email, and online platforms. She has written essays for Catholic Answers online and print magazines and has written four booklets for the 20 Answers series of the apostolate. His 20-answer booklets covered Judaism, the New Age, Witchcraft and the Occult, and the Liturgical Year of the Church. Today a freelance writer, editor and proofreader, Michelle arnold has a blog at Catholic Pathéos channel. A wallet of his published essays is available on Authory.

Action needed to prevent Christians from leaving Lebanon and Iraq