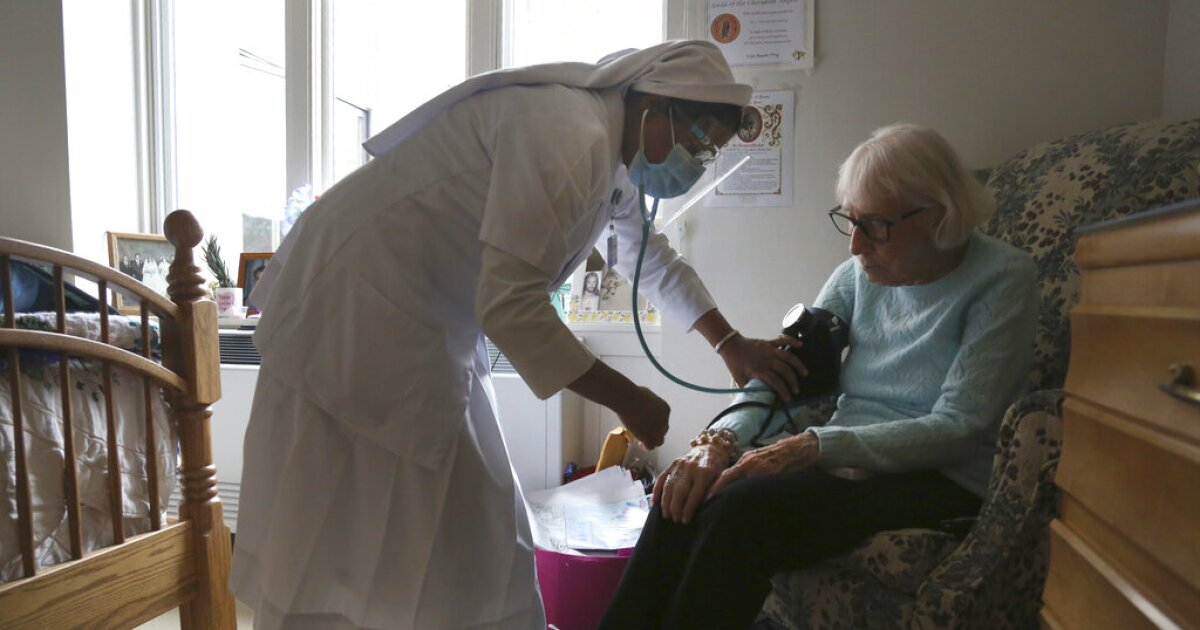 COVID-19 wreaks havoc on Catholic clergy in hard-hit countries, including the United States

The coronavirus has taken a heavy toll on Catholic priests and nuns around the world, killing hundreds of them in a handful of the hardest-hit countries.

The dead include an Italian priest who brought cinema to his small town in the 1950s; a beloved New York pastor who cared for teens and the homeless; a nun in India who returned home to bury her father after his death from COVID-19 to contract the virus herself.

In some countries, most of those lost were older and lived in nursing homes or retirement homes where they did not regularly engage in person-to-person pastoral work. Other places, however, have seen a bigger blow to active clergy, accelerating a decades-old decline in the ranks that Pope Francis in 2017 called a “hemorrhage.”

Coronavirus deaths among the clergy are not just a Catholic problem, said Andrew Chesnut, president of Catholic studies at the Commonwealth of Virginia University, with religious leaders of all faiths having high exposure rates as â€œFrontline spiritual workersâ€ caring for the sick and dying in hospitals and nursing homes.

But the impact is particularly acute for a church that is experiencing a “permanent shortage of priests” in most countries due to difficulties in recruiting seminarians, he added. And with Catholicism placing more emphasis on the role of the priest over other faiths, the losses are keenly felt.

â€œIf you already have so few priests and they’re wiped out by COVID-19,â€ Chesnut said, â€œof course that affects the ability of the church to serve its parishioners.â€

Catholics are a small minority in India, comprising about 20 million of the 1.38 billion people of this predominantly Hindu nation, according to the Catholic Bishops’ Conference of India.

But the surge in death reports among the clergy so alarmed Reverend Suresh Mathew during a devastating second wave of coronavirus this spring that he began sending emails to bishops across the country, requesting daily updates. Many mornings he woke up with multiple alerts.

â€œIt was a shock,â€ said Mathew, a priest at Holy Redeemer Church in New Delhi.

About two priests and nuns died every day in April. The rate doubled in May, when Mathew recorded the deaths of 129 nuns and 116 priests.

The worst of the pandemic has abated in India, but not before it compiled a list of more than 500 priests and nuns lost since mid-April.

One of these losses affected near our home: Sister JosÃ©phine Ekka from the convent of Surya Nagar in her parish. She had traveled to bury her father in the village of Jharsuguda in eastern India before falling ill herself.

Ekka joined the community in September 2020 amid the pandemic and became responsible for the liturgy and choir organization at a time when church attendance was limited. She was remembered for her kindness and dedication to the poor.

In the western state of Gujarat, where vaccinations were blocked by a powerful cyclone that struck as the pandemic escalated, Reverend Cedric Prakash of St. Ignatius Loyola Church mourns five priests.

They include Reverend Jerry Sequeira, a close friend who on Easter Sunday baptized a newborn baby whose father died of COVID-19. A day later, Sequeira found out that he too had contracted the virus.

â€œHis attitude was ‘nothing is going to happen to me, God is good’,â€ Prakash said. â€œHe was always available to people.

The United States Conference of Catholic Bishops says there is no full tally of the number of priests and nuns among the more than 600,000 people who have died from COVID-19 in the United States.

It is, however, well established that the toll includes dozens and dozens of nuns who lived in gathering places across the country, from upstate New York to suburbs of Milwaukee and Detroit and beyond. Many were older retirees who devoted their lives to teaching or nursing.

Only one order, the Sisters FÃ©liciennes, lost 21 nuns in four convents.

â€œFaith and hope have both played a part in my life as I watch the devastating news of the loss,â€ said Sister Mary Jeanine Morozowich of Greensburg, PA. “I couldn’t go on without believing that there is a purpose, a reason for all of this.”

Reverend Jorge Ortiz-Garay of St. Brigid’s Church in Brooklyn, New York, died on March 27, 2020 and is believed to be the first priest in the United States to fall victim to COVID-19. The 49-year-old, who oversaw the Diocese of Our Lady of Guadalupe’s annual feast and pilgrimage for thousands of participants, has been remembered by the faithful for his dedication to the community and to groups of young leaders.

Also among the lives lost was Reginald Foster, 81, a Wisconsin-born priest who for four decades was one of the Vatican’s top Latin experts. He died in a Milwaukee nursing home on Christmas Day.

Italy was one of the hottest hot spots at the start of the pandemic.

As of March of this year, 292 diocesan priests, mostly elderly, have died from the virus, according to news outlets at the Italian Bishops’ Conference.

SIR, the conference news agency, noted that the toll was almost equal to the 299 new ordinations in Italy for the whole of 2021.

Among the dead was the Reverend Raffaele Falco, priest in Ercolano, near Naples. The 77-year-old was known to have used his work to fight the Naples-area crime syndicate, La Camorra.

Reverend Franco Minardi, 94, also died, arrived in Ozzano Taro in 1950 and served as its priest for 70 years. So attached to reviving the faith of young people, he organized the construction of a theater where he screened the first films of the peasant town. Its outreach legacy also includes a tennis court and games room.

Sister Maria Ortensia Turati, 88, was one of the many nuns who died in a convent in the city of Tortona, in the north of the country. A social worker by training, she was mother general of the Little Missionary Sisters of Charity from 1993 to 2005 and founded missions in the Philippines and CÃ´te d’Ivoire.

As of March of this year, at least 1,400 priests in Brazil have contracted COVID-19 and at least 65 of them plus three bishops have died, according to a commission linked to the National Bishops’ Conference.

Among them was Cardinal Eusebio Scheid, 88. He became Archbishop of Rio de Janeiro in 2001 and was appointed cardinal two years later by then Pope John Paul II. During his 60 years in the church, he was known for his deep interest in the quality of priestly education.

Scheid was also known for a comment that some understood as political, others as a blunder; he called the then president, Luiz Inacio Lula da Silva, “chaotic” instead of Catholic. After a slight uproar, Scheid softened his tone, saying Silva seemed “confusing” in matters of faith.