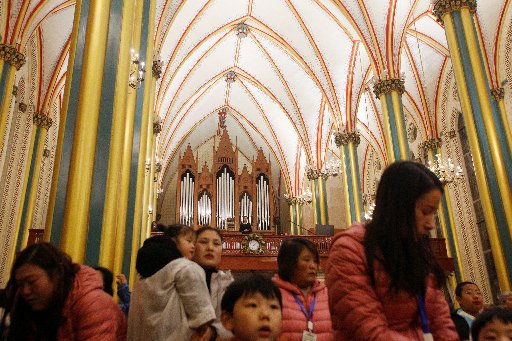 BEIJING — Two state-sponsored religious bodies in China have elected new leaders, who have promised to invigorate the Catholic faithful pastorally in accordance with the socialist principles of the Chinese Communist Party.

The delegates unanimously accepted the work report of the Ninth Standing Committee on the efforts and activities of the Church in promoting patriotism, socialism and Sinicization in the Catholic Church, as described by the President Xi Jinping.

Sinicization is a political ideology that seeks to impose strict rules on societies and institutions based on the core values ​​of socialism, self-reliance and support for the leadership of the Communist Party of China, ucanews.com reported.

More than 300 Catholic bishops, clergy and religious from across China have elected new leaders of the Chinese Catholic Patriotic Association and the Episcopal Conference of the Catholic Church in China, according to a report on the Bishops’ website. .

The new leaders issued a statement in which they pledge to engage priests, religious and lay people across the country for pastoral evangelization and the promotion of Sinicization for “truth, pragmatism and inspiration” in order to move towards a “bright future”.

The declaration of the new leaders also stressed the need for the Catholic Church to implement the spirit of the National Conference on Religious Affairs held last December and to meet the demands of the Central Committee of the Communist Party for the Catholic Church. in China. During the Dec. 3-4 conference, Xi stressed strict implementation of Marxist policies, increasing online surveillance, and tightening control over religion to ensure national security.

The bishops said it was “necessary to unite and lead priests, elders and faithful to follow Xi Jinping’s Thought on Socialism with Chinese Characteristics for a ‘New Era’; continue to have high patriotism and a love for religion; (and) adhere to the principles of independent and self-governing churches,” the bishops’ statement read.

Church leaders said they believe it is important to adhere to the direction of the sinicization of Catholicism in China to “vigorously strengthen the construction of patriotic forces” to achieve “the dream of the great rejuvenation of the Chinese nation.” .

Following the communist takeover in 1949, China severed diplomatic relations with the Vatican.

For years, the appointment of bishops has remained a bone of contention between the Chinese government and the Vatican, with Beijing appointing and consecrating bishops without a mandate from the Vatican. Although it has ordained many “elected” bishops without papal approval, the Chinese Church has kept the line of apostolic succession alive by having validly ordained bishops as consecrators.

China has about 12 million Catholics split between those whose leaders have joined the patriotic association and those who refuse, according to independent researchers.

In 2018, the Vatican signed a two-year provisional agreement with China on the appointment of bishops; the agreement was renewed for another two years in 2020. The terms of the agreement have not been made public.

The Vatican would seek to unite Catholics to the deal, which gives the Vatican the right to accept or veto bishops selected by Beijing.