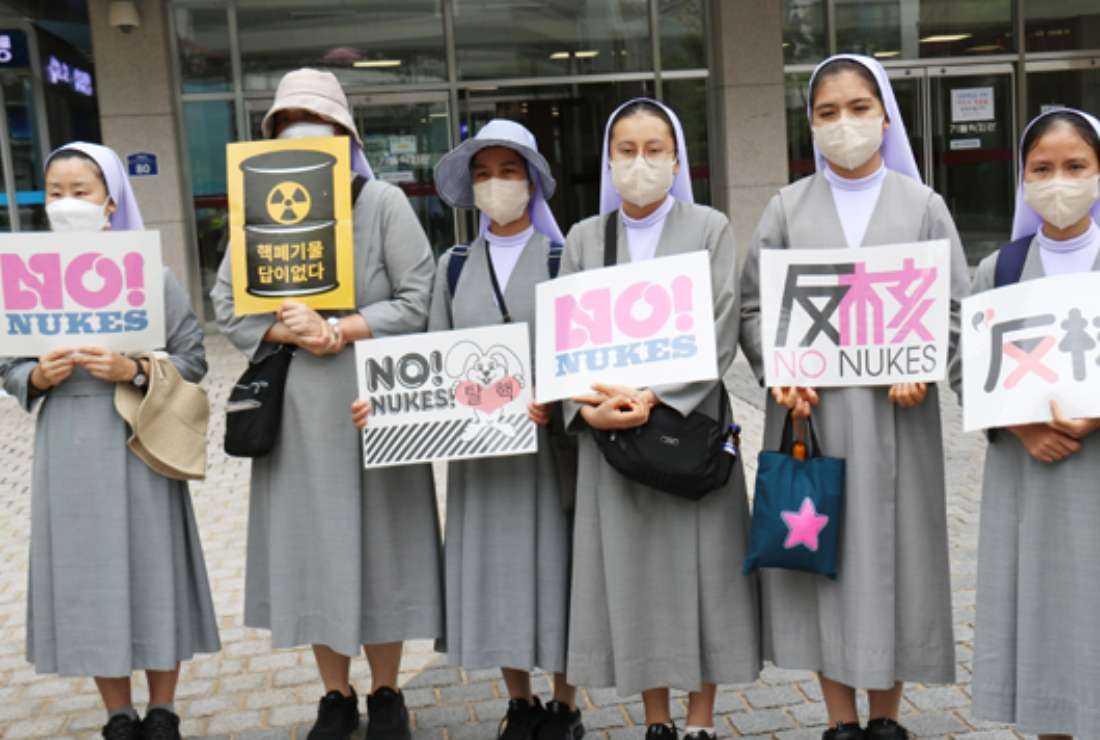 Korean and Japanese Catholic priests, clerics, lay people and civil society activists have joined a pilgrimage to urge the governments of South Korea and Japan to move away from nuclear power.

The 2022 Korea-Japan Nuclear Peace Pilgrimage was held from August 28 to 31 with pilgrims visiting the South Korean cities of Busan, Daejeon and the capital Seoul, the Korea Catholic Time reported September 6.

Sponsored by the Ecology and Environment Committee of the Korean Catholic Bishops, the pilgrimage continued with several slogans such as “Forward for Life and Peace” and “Nuclear power generation is not the solution to the climate crisis”.

The 28-member pilgrimage team was led by Bishop Blasio Park Hyeon-dong, chairman of the committee, and Father Paul Paik Jong-yeon, secretary of the Catholic Bishops’ Conference of Korea.

The tour ended at Myeongdong Cathedral in Seoul on August 31 with a joint statement by churches and civil society groups demanding that the South Korean and Japanese governments “stop extending the life of old power plants.” nuclear” and “cancel plans to build new nuclear power plants”. plants.”

The pilgrims also pledged to lead the cessation of nuclear power generation and the abolition of nuclear weapons through solidarity between Korean and Japanese citizens.

During the pilgrimage, participants visited nuclear power plants in Kori and Wolseong, Gyeongju, and the Atomic Energy Research Institute in Daejeon, staged a street campaign in solidarity with local anti-nuclear groups and held talks with residents affected by the nuclear power plant. .

At the first meeting held at the Gwanpyeong-dong Catholic Church in Daejeon, the activities of the Japanese Church in solidarity with the fight against nuclear waste disposal in Hokkaido, Japan, and the Daejeon nuclear power plant, and Gyeongju, where an innovative nuclear research complex is being built, were discussed. In the second meeting held at the Catholic Center in Myeong-dong, Seoul, the issues of the Japanese government’s high-level nuclear waste management policy and the Korean government’s response to the climate crisis, and the importance of Carbon neutrality and nuclear power priority policies were reviewed.

Seok Gwang-hoon, an expert from the Energy Conversion Forum, criticized the Yoon Seok-yeol government’s energy policy which marked a reversal from the nuclear exit policy of the previous Moon Jae-in government.

“We must raise our voices together for the nuclear disarmament movement”

Bishop Park said he was shocked by the location of power plants in densely populated areas.

“The fact that nuclear facilities are located in densely populated areas where so many people live is shocking,” Bishop Park said.

Filipino-born Bishop Edgar Gakutan of Sendai in Japan said Koreans and Japanese should make united efforts against nuclear power and for disarmament.

“We must raise our voices together for the nuclear disarmament movement,” Bishop Gakutan said.

The Korea-Japan nuclear peace pilgrimage began in 2012, a year after the radioactive leak from Japan’s Fukushima nuclear power plant struck fear across the region. The pilgrimage took place online in 2020 and 2021 due to the Covid-19 pandemic.

Korean Catholics have taken up arms against nuclear power plants and staged a series of protests to call for a phase-out and the introduction of renewable energy.

Last year, the Korean and Japanese bishops issued a joint statement against the Japanese government’s decision to discharge contaminated water from the Fukushima power plant into the sea.

If you paid suspended student loans, you could get a refund