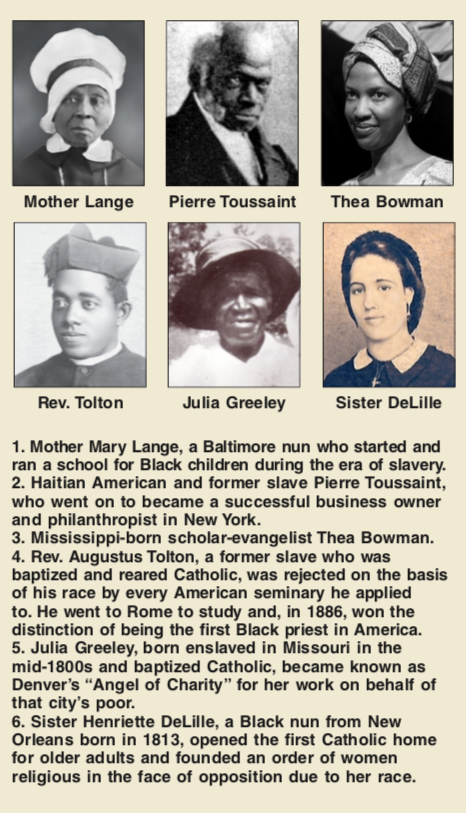 BALTIMORE – The process of recognizing saints in Catholicism is so arduous that it can take generations, if not centuries, but even the generally slow Catholic Church can speed things up when it wants to.

In the cases of Mother Teresa of Calcutta and Pope John Paul II, for example, church officials waived a five-year waiting period after their deaths to initiate the process.

Now, a group of Catholics in Baltimore say it’s time to step up the cases of six other heroes of the faith.

Parishioners of St. Ann’s Catholic Church, a predominantly African-American congregation in the East Baltimore Midway neighborhood, and the two other churches in its pastorate, Historic St. Francis Xavier and St. Wenceslaus, seek to argue that the The church should immediately canonize six black American Catholics. Candidates include Mother Mary Lange, a nun from Baltimore who opened and ran a school for black children during the days of slavery.

They used a special St. Ann’s Mass on Monday night to advocate for the cause, and organizers said they would also use the All Saints’ Day service to launch a national letter-writing campaign. They hope to collect signatures on letters from Catholics in the Archdiocese of Baltimore and beyond in the coming weeks, then bundle them in a package to send to Pope Francis no later than January.

Mother Lange, who died in 1822, and other candidates, including a former Haitian-American slave, Pierre Toussaint, who became a successful business owner and philanthropist in New York City, and Mississippi-born scholar-evangelist, Thea Bowman . – have had to overcome so much racism inside and outside the church in their lifetimes that their cases should be considered exceptional, said Ralph E. Moore Jr., a member of St. Ann helping to direct the effort.

The church never made a black American Catholic a saint.

â€œThese strong and courageous people have lived exemplary lives,â€ said Mr. Moore, a longtime Catholic who is African American. â€œThey kept the faith through slavery and other forms of racial discrimination, even when considered second-class members of their own church.

â€œThe church has already broken the rules (for the canonization process). He could do the same thing again. We think he should, â€he continued. â€œWe would like to see our ancestors canonized. “

The mass included a procession through the church by parishioners carrying oversized portraits of the six candidates for holiness – Mother Lange, Mr. Toussaint, Mrs. Bowman, Reverend Augustus Tolton, Julia Greeley and Sister Henriette DeLille – as the choir of three churches sang “When the Saints Come On”.

Reverend Tolton, a former slave who was baptized and raised in the Catholic religion, was rejected on the basis of his race by all the American seminaries to which he applied. He went to Rome to study and, in 1886, won the distinction of being the first black priest in America. (The racial origin of three brothers ordained earlier was not widely recognized during their lifetime. James, Patrick and Sherwood Healy were the sons of a black woman who had been enslaved and the white man who owned her. , according to an essay by James M. O’Toole, professor of history at Boston College.)

Ms. Greeley, who was born into slavery in Missouri in the mid-1800s and baptized Catholic, has become Denver’s â€œAngel of Charityâ€ for her work for the poor in that city.

Sister DeLille, a black nun from New Orleans born in 1813, opened the first Catholic home for the aged and founded an order of nuns in the face of racial opposition.

The process of declaring a person a saint involves several important steps. Five or more years after the candidates die, their bishop can open an investigation to determine whether their life was sufficiently holy or righteous. If a special Vatican department, the Congregation of Saints, agrees, the candidate is considered a â€œServant of Godâ€ and the case moves forward.

If church researchers can verify a miracle the candidate has performed, he or she is â€œbeatified,â€ and a second confirmed miracle can signify holiness.

All six have been declared servants of God, which means they have passed the first major test on the path to holiness. Mr. Toussaint, Reverend Tolton and Sister DeLille were also deemed “venerable”, placing them at a miracle of beatification.

Saints are believed to live near God in heaven, to be able to intercede with God, and to exemplify godly behavior. This means that the absence of an African American saint leaves a void in the spiritual lives of 3 million black Catholics in the United States.

Some in the Archdiocese see the burgeoning push as being accompanied by a greater effort on the part of the modern church to recognize, attempt to atone, and transcend a story that few modern observers would deny that it has long ago. been tainted with racism.

Bishop Bruce Lewandowski, longtime pastor of the predominantly Spanish Church of the Sacred Heart of Jesus in Highlandtown and now Urban Vicar of the Archdiocese, concelebrated Mass on Monday with Reverend Xavier Edet, head of the pastorate of St. Anne.

Bishop Lewandowski points out that priests, bishops, deacons and nuns of past generations were themselves among the Americans who enslaved people. Their attitudes became the foundations of a faith whose seminaries often excluded black students, whose hospitals often banned black patients, and whose congregations sometimes forced black worshipers to sit in the back benches – when admitted. .

Mr. Moore, 69, grew up at a time when some of these practices were in effect.

When he attended predominantly white Catholic churches as a child, he said, his family had to sit in the bottom three rows. It was necessary for white worshipers to commune before African Americans, he said.

Such affronts baffled a young man who was otherwise enthusiastic about his faith, especially the exceptional education he received in Catholic schools in Baltimore.

â€œYou can’t love the Gospels and mistreat people, but this church would kind of allow people to practice Catholicism and racism at the same time,â€ he said.

Although the church has removed these restrictions over the years, progress in other areas is slow. It took the Black Catholic Movement of the 1960s and 1970s to advocate for the ordination of more black Catholic priests and bishops, for example. It was not until last November that the church elevated an African-American prelate, Archbishop Wilton Gregory of Washington, DC, to the rank of cardinal.

Delores Moore, who is unrelated to Ralph Moore, is another longtime St. Ann’s parishioner and, like Mr. Moore, is a member of its social justice committee. She said it has long been painful to face the fact that of the more than 10,000 men and women the Catholic Church has canonized in its history, including dozens of people of African descent, 11 Americans and a record of 899 by the current Pope Francis. none are African-American.

â€œThis has always been an important question,â€ said Ms. Moore, who is African American. â€œBut given what is happening in our society with Black Lives Matter, the injustices that we have seen with George Floyd and all the other less publicized injustices that occur every day, we realize that systemic racism occurs throughout our society, and that unfortunately includes our churches.

â€œIt may be unintentional,â€ she said. “I hope. But we have to put a spotlight on this.”

Mr. Moore said they had waited long enough that the church should give up its usual demands and recognize them as the saints they are as soon as possible.

â€œThe church keeps saying, ‘We are following the process.’ But if the process produces bad results, you may have to reconsider the process, â€he said. “We ask them to put these six on the fast lane.”

The Mystery of the “Agatha Christie Indult” | Catholic National Register