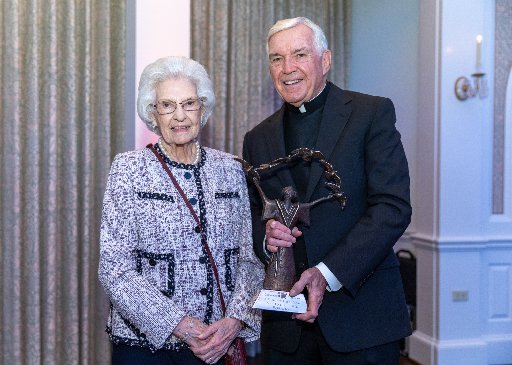 Catholic Extension honors Texan for philanthropy to church and community

HOUSTON — Catholic Extension honored Houston native Raye G. White with its fifth annual Spirit of Francis Award “for his passion and commitment” to the faith community in the Houston area.

The award recognizes an individual or group who has had a significant impact on the mission of the Catholic Church in America through service or philanthropy.

Father Jack Wall, president of Extension, presented the award to White, calling her “a woman whose life exemplifies the importance of faith, the centrality of family, as well as the values ​​of hard work, service and of generosity”.

He said his lifelong commitment to his family, his community and the Catholic Church “will surely leave a lasting impact for generations to come”.

A press release about the award, presented at a Feb. 17 dinner in Houston, said White’s “passionate concern for others and desire to give back to the community she loves” is the basis of all his endeavors, “from the boardroom to his myriad philanthropic endeavours.

These efforts include supporting the development of Archbishop Joseph A. Fiorenza Priest’s retirement residence at St. Dominic Village in Houston; various initiatives of the Archdiocese of Galveston-Houston, including the annual Archdiocesan Prayer Breakfast; and his annual support of the San Jose Clinic and Catholic charities.

White called it a “great honour” to receive this year’s Spirit of Francis award.

She noted past Texan recipients of the award who “had such a wonderful impact on my life”: retired Archbishop Joseph A. Fiorenza of Galveston-Houston, who received the honor in 2018; Bishop Curtis J. Guillory, now retired, of Beaumont, Texas, honored in 2019; and the late Jesuit Father Antonio “TJ” Martinez, honored posthumously in 2020.

“I’m so grateful to be in such wonderful company,” she said.

White is the Executive Vice President and Chief Compliance Officer of Fayez Sarofim & Co. She has been with the firm since its inception in 1958 and is a licensed investment adviser.

Additionally, White serves on various boards, including for the Hermann Eye Fund and the CHRISTUS Foundation for HealthCare and is a life director at the University of St. Thomas.

The Spirit of Francis award is inspired by its three namesakes: St. Francis of Assisi, Pope Francis and Father Francis Clement Kelley, founder of Catholic Extension, all known for embracing and helping the poor.

Proceeds from the dinner will go to Catholic Extension’s support of rural mission churches in Texas “where resources are scarce, but faith is strong,” the press release said.

Catholic Extension is a Chicago-based papal missionary society that supports the work and ministries of American missionary dioceses. During its 117-year history, it has supported all 15 Catholic dioceses in the state of Texas.

Today, he helps impoverished churches invest in their infrastructure, leadership, and ministries in the dioceses of Amarillo, Lubbock, San Angelo, El Paso Tyler, Beaumont, Laredo, and Brownsville. Collectively, these dioceses are home to 2.8 million Catholics.