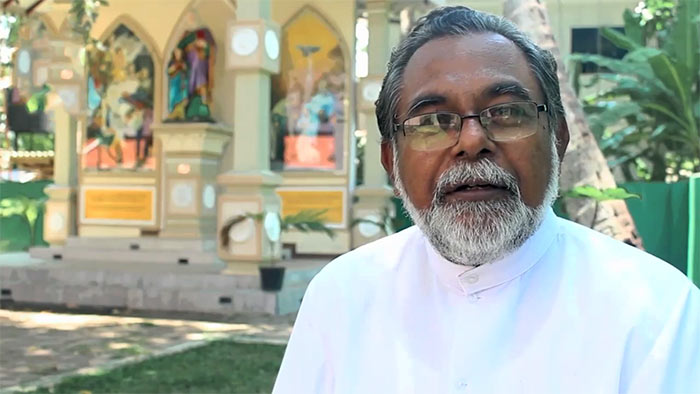 The Catholic Church has raised concerns that politicians could put the lives of the general public at risk to win an election.

Reverend Father Cyril Gamini Fernando told the Daily Mirror in a live video interview that there have been allegations that the Easter Sunday attacks were part of a plot linked to the 2019 elections.

He said that if the conspiracy theories are true, the lives of the general public are in danger.

Reverend Father Cyril Gamini Fernando said past elections have been plagued by corruption.

The Catholic priest noted that in the past, money, alcohol, roofing sheets and other perks have been offered to win an election.

However, he said that if the conspiracy theories are true, the Easter bombings could be seen as the first time a group of people were murdered targeting an election.

Reverend Father Cyril Gamini Fernando warned that while some people assume that such a tactic is an effective way to win an election, such a tactic can also be used by others.

He said those accused of being part of the plot linked to the Easter Sunday bombings must be arrested.

The outspoken priest said failure to arrest conspirators linked to the Easter Sunday bombings is a threat to democracy in Sri Lanka.

He said Livera’s Dappula claimed there was a conspiracy behind the Easter bombings and therefore this conspiracy should be exposed.

Public Safety Minister Sarath Weerasekera could not be reached for comment. (Courtesy of the Daily Mirror)

The Catholic Church fears that if some claims related to the Easter bombings are true, people’s lives could be used in the future to win an election#Sri Lanka #lka #Catholic Church #EasterSundayattacks pic.twitter.com/NKr0AHxkoq

Behind the Mystery of Valentine’s Bones