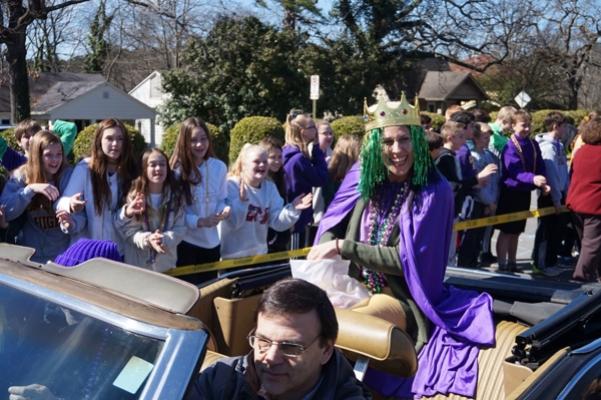 Term means “farewell to the flesh” in Latin, became a festive season before Lent

Our Lady of the Holy Souls High School religion teacher and Class of 1991 alumna Lynn Milton is the school’s Mardi Gras parade queen in this March 5, 2019 file photo.

Our Lady of the Holy Souls High School religion teacher and Class of 1991 alumna Lynn Milton is the school’s Mardi Gras parade queen in this March 5, 2019 file photo.

The Church calendar may indicate Ordinary Time, but the period between Christmas and Lent is anything but Ordinary. In many parts of the world, including Arkansas, Christians celebrate Carnival, which begins each year on Epiphany, the end of the Christmas season, and continues until the start of Lent at midnight at the start of of Ash Wednesday.

New Orleans-based Mardi Gras historian Arthur Hardy said the roots of carnival go back to the early church. As it gained converts and gained influence, the Church co-opted certain pagan practices into its celebrations. The carnival, which has become the first spring festival of the new year, is perhaps one of them.

“The Catholic Church almost authorized Carnival as a time of celebration before the Lenten fast,” Hardy said. “The ancient pagans had crazy ideas about celebration, and the Church said, ‘You can keep some of these things, but we’re going to channel them into Christian events.

Carnival, which means “farewell to the flesh” in Latin, became a festive season before Lent – a season of mourning lasting about six weeks, created at the Council of Nicaea in 325, which commemorates the 40 days that Jesus spent fasting and being tempted by Satan in the wilderness before beginning his public ministry. Traditionally, during Lent, Catholics were expected to fast and refrain from drinking alcohol or eating meat or any food of animal origin, including milk, butter or eggs. Mardi Gras, also known as Shrove Tuesday, the last day to indulge before the Lenten fast, has become the highlight of Carnival.

“Mardi Gras, or Fat Tuesday, is always 47 (calendar) days before Easter. This can be as early as February 3 or as late as March 9, which means the carnival season can be as short as 28 days. or as long as 63.”

Because Lent is tied to Easter, the length of Carnival changes each year, depending on when holy days are set on the Church calendar.

“Mardi Gras, or Shrove Tuesday, is always 47 (calendar) days before Easter,” Hardy said. “It can be as early as February 3 or as late as March 9, which means the carnival season can be as short as 28 days or as long as 63.”

This year, Mardi Gras will be celebrated on March 1.

Many carnival traditions, including parades and masked balls, developed in medieval Italy, then spread throughout Europe and were introduced to the Western Hemisphere with the colonization of the Americas. Today, the biggest annual carnival celebrations take place in Venice, Italy, which legend says began in 1162; Rio de Janeiro, Brazil, which dates from 1641; and New Orleans in 1730.

“We’ve celebrated it the way we do now — with a parade theme, floats, costumes and masks — since 1857,” Hardy said of the Big Easy. “It started as a one-day celebration with a parade with two floats, and now there are about 60 parades over a two-week period in our metro area.”

Hardy said the biggest misnomer about carnival is that it’s an adults-only event. He said several generations of families lined the parade routes in the same place night after night to watch the parading krewes or organizations pass by.

The first annual Mardi Gras celebration in what is now the United States was organized by French settlers in Mobile, Alabama in 1703. In New Orleans and Mobile, krewes are social organizations in nonprofit whose members make it to the top of society, and their formal white-tie events are among the most sought-after invitations. Rex Parade members support the Pro Bono Publico Foundation, which has donated more than $9.3 million to New Orleans-area schools and charities since 2006.

Mardi Gras was popular in Little Rock in the 19th century. The Ash Wednesday edition of the Arkansas Gazette in 1877 included several stories about a Mardi Gras parade and masked revelers in downtown Little Rock. The next day’s newspaper contained articles about the balls held before the event.

With the exception of last year due to COVID, Our Lady of the Holy Souls School in Little Rock holds an annual Mardi Gras Parade, where Pastor Father John Marconi reigns as king of the celebration.

“It is customary for the pastor to be the king, with other students being selected to ride with him, handing out beads and sweets,” Fr. Marconi said. “Since he is outside, weather permitting, we will have him this year. Kids love it. It’s a fun way to teach them how to prepare for Lent.

All three events will take place on Saturday, February 26.