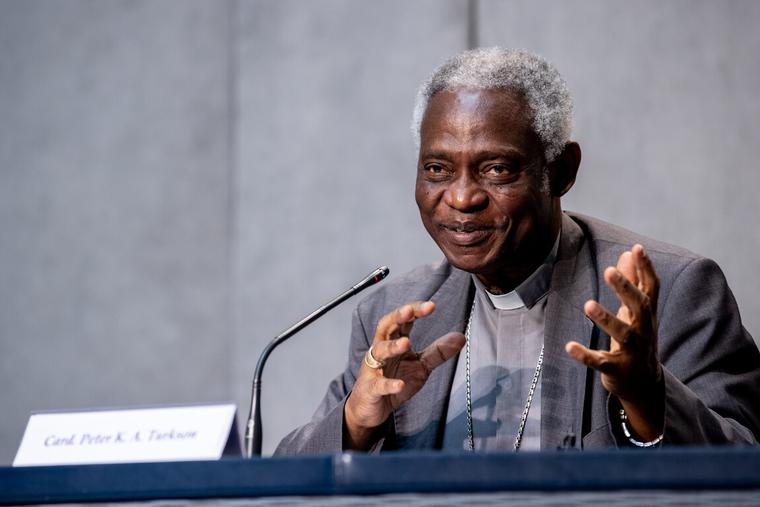 Cardinal Peter Turkson appeared to dismiss claims that President Joe Biden should be denied Holy Communion because of his staunch stance in favor of abortion rights, in remarks made on a Sunday newscast. American who addressed many topics, including COVID-19 vaccines, the conflict in Afghanistan and clergy sexual abuse.

Cardinal Turkson appeared on Axios, an HBO news show that airs October 3. Show host Mike Allen cited the debate over whether pro-abortion politicians like President Joe Biden should be denied Holy Communion. Allen quoted an anonymous bishop who said: “The Eucharist is being turned into a weapon.

“The Eucharist must in no way become a weapon,” said Cardinal Turkson.

“Do you have any questions as to whether President Biden is a Catholic in good standing?” Allen asked. “Should we serve him communion?”

Cardinal Turkson replied, “If you say that someone cannot receive Communion, you are essentially judging that you are in a state of sin.

“It seems you didn’t think this should be happening in President Biden’s case,” the interviewer said.

“No,” Cardinal Turkson said. “You know, if, you know, a priest giving Communion suddenly sees someone he knows has murdered, he’s supposed to protect his dignity and respect that person. “

Cardinal Turkson, born in Ghana, is Prefect of the Dicastery for the Promotion of Integral Human Development.

Debates about the reception of Holy Communion by pro-abortion rights are somewhat unique to the American political context, where many politicians present themselves as devout Catholics but also support legal abortion. Elsewhere in the world, such political leaders are much less common.

Canon 915 of the Code of Canon Law of the Church states that Catholics “obstinately persevering in manifest grave sin are not to be admitted to Holy Communion”. Then cardinal Joseph Ratzinger, in a 2004 note to American bishops in his role as prefect of the Congregation for the Doctrine of the Faith, said that Catholic politicians who “constantly campaign and vote for permissive laws on abortion and euthanasia “are considered to cooperate formally with the grave sin of abortion, and in a” manifest “manner.

In such cases, Cardinal Ratzinger said, the official’s pastor must meet with them and reprimand them, telling them that they cannot receive Communion. If politicians persist in their advocacy for abortion, the Communion minister “must refuse to distribute it,” he said.

American bishops voted in June to draft an official statement on what the Eucharist means in the Church. They cited the lack of understanding among Catholics of the teaching of the Church and of the dignity of receiving Holy Communion, and some discussions raised the issue of prominent Catholic pro-abortion politicians.

In June, U.S. Representative Ted Lieu, D-Calif., Took to Twitter to challenge U.S. bishops to deny him Holy Communion over his support for contraception, legal abortion and same-sex marriage. The Democratic Party has become strongly supportive of abortion rights over the past few decades and tensions have grown as a Republican-dominated Supreme Court appears poised to change the precedent imposing legal abortion on the nation. nationwide.

Cardinal Turkson’s other comments dealt with a lack of action in global development efforts.

“We talk more than we do. We talk a lot and we do very little, ”he told Axios on HBO. “Some presidents, some heads of state say: ‘When I return home, all parliamentarians in my country will use an electric car.’ It didn’t happen.

The Church is trying to get people to act by “calling and encouraging”, he said, adding “We will try to make the cry of the poor and the cry of the earth heard” .

On the issue of vaccine distribution, Cardinal Turkson noted that Biden was trying to keep his promises to immunize enough Americans. Global gatherings like the G7 and G20 conferences have seen “a lot of promise” about how many doses of vaccine would be available for Africa and other countries.

Although he agreed that rich countries can and must do more, he said: “I would basically like to encourage African heads of state and leaders to explore traditional therapies for this as well.

“If local heads of state were to promote local herbal medicines, our dependence on vaccines will not be 100%,” he said, adding that “we need to diversify our therapies. “.

“Is it a question of rights? Even men who are ordained don’t see it as a right. “

In matters of sexual abuse, the cardinal declared that all young people who enter seminary and convents are “products of a society”.

“I don’t blame society for the crime,” he said, adding that it was not necessary to ignore “the factors that influence the lives of people who become priests”.

“They come from certain backgrounds, and we don’t know what contaminated them from there,” he said. Some could be victims of abuse themselves.

He advocated efforts to ensure that the characters of potential priests are fully developed and known before they are ordained and show abusive tendencies “to embarrass the Church and everyone”.

Cardinal Turkson, who is black, spoke of racism. He said, “The Church can certainly do more. There was a time when the institutions of the Church owned slaves because it was the turn of time, so to speak.

“What is past is over,” he said, while approving “The repair if it can be done can be done”. There must also be a call for resolution “not to repeat the mistakes of the past.”

The interview focused on remarks about the conflict in Afghanistan, in which he said all eventualities were not considered. He said the United States entered the country with “revenge” and “war posture” to get the “culprit”.

“If the United States had come in first, not even with a militant posture but to speak out, we would now be living with a completely different situation,” Cardinal Turkson said.

“I recognize the complexity of the situation. But it becomes a lesson for international diplomacy, ”he said, encouraging more efforts to speak out and seek reconciliation.

Truth and Thanksgiving in 2021 – BC Catholic

How to mix strength with weakness

Despite the challenges of the pandemic, the community life of Ukrainians in New Haven…

Religious services for Gwynedd and Conwy for Sunday October 10