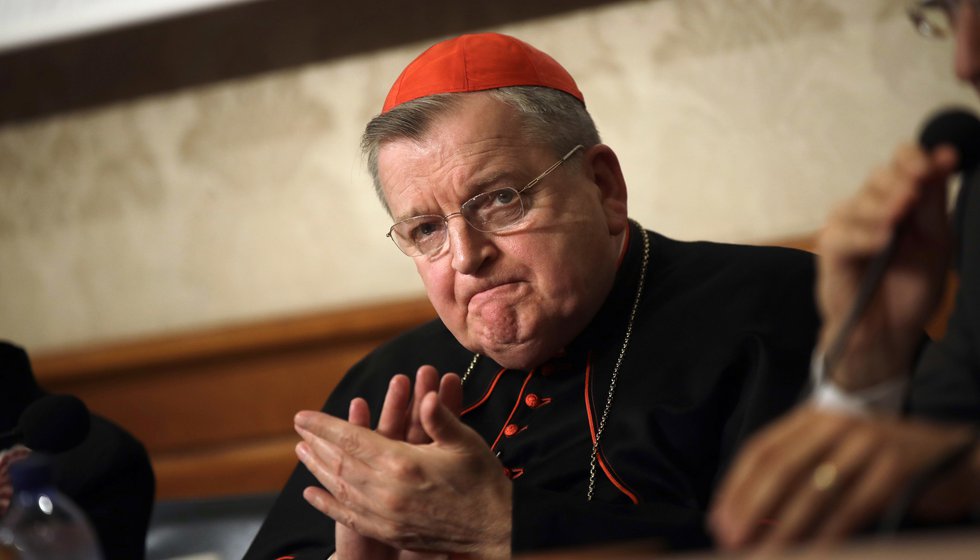 LA CROSSE, Wisconsin (AP) – A high-ranking Roman Catholic cardinal who was hospitalized after contracting COVID-19 is off a ventilator and released from intensive care, according to officials at a Wisconsin sanctuary he founded.

Cardinal Raymond Burke was due to return to an ordinary hospital room in an undisclosed location on Saturday, Our Lady of Guadalupe Shrine in La Crosse said in a statement.

Burke, 73, one of the Catholic Church’s most vocal conservatives and a vaccine skeptic, had been sedated and on a ventilator following his August 10 tweet that he had contracted the coronavirus.

â€œHis sister spoke to him on the phone this morning, and His Eminence expressed his deep gratitude for the many prayers offered on his behalf,â€ the statement from Rev. Paul N. Check, executive director of the shrine, said on Saturday.

“His family requests that we continue these prayers for his full and speedy recovery, and they are grateful to God for the exceptional medical care the cardinal received from the dedicated doctors and nurses who continue to help him,” the statement said.

An earlier statement from the shrine stated that Burke had received sacraments from priests and that several relics had been placed in his room.

Burke holds a doctorate in canon law. He was bishop in the diocese of La Crosse before becoming archbishop of Saint-Louis. He left St. Louis in 2008 to oversee the Supreme Court of the Vatican, becoming the first American to hold that position.

He has forged a reputation as an outspoken conservative. He gained attention in 2004 when he said he would not give Holy Communion to Democratic presidential candidate John Kerry because Kerry supports the right to abortion. In 2009, he berated the University of Notre Dame for its intention to give an honorary degree to then-President Barack Obama because Obama, too, supports the right to abortion.

Francis brought Burke out of the Vatican court in 2014 after Burke declared the church to be like a ship without a rudder.

Burke has been on the attack against Francis ever since. He joined three other conservative cardinals in formally asking the Pope in 2016 to explain why he decided to let remarried Catholics receive Holy Communion.

Burke also warned people that governments were using fear of the pandemic to manipulate people. He spoke out against mandatory vaccinations in May 2020 and said some in society wanted to implant people with microchips. He said the best weapon to fight the virus is Jesus Christ.

A Higher Vocation: A Catholic Priest Celebrates His 90th Birthday And Continues To Devote His Life To Church Service