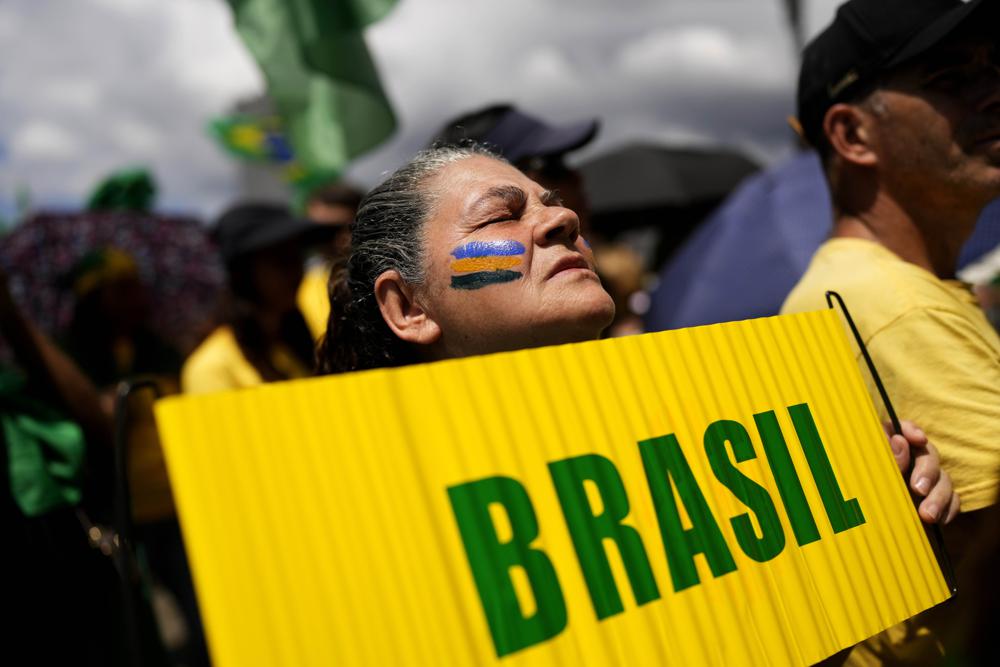 SÃO PAULO – Auxiliary Bishop Vicente de Paula Ferreira of the Archdiocese of Belo Horizonte was threatened by a gunman after a mass Nov. 12 in the suburban town of Moeda, a sign of the political violence facing members of the clergy in Brazil.

Ferreira, a vocal critic of the Bolsonaro right, left the church after mass and was approached by a stranger who apparently was not part of the parish. The Brazilian press reported that the author is a supporter of Bolsonaro.

Bishop Walmor Oliveira de Azevedo, who is also president of the National Conference of Bishops of Brazil (CNBB), released a statement in which he said that Ferreira was “a victim of intolerance, of the lack of a minimum of conviviality, of cowardly disrespect.

“Judicial steps are already being taken to ensure that hostilities directed against a servant of the Gospel, in the exercise of his mission, do not go unpunished,” de Azevedo said in the statement.

Although the presidential election is now over, political battles continue in Latin America’s most populous nation.

Many Bolsonaro supporters refuse to accept the election results and accuse the Superior Electoral Court of committing fraud in favor of Lula. However, no evidence of voting irregularity was provided.

Shortly after the result was announced, Bolsonarist groups staged dozens of roadblocks on highways across the country, which were finally cleared on November 10. Additionally, several Bolsonaro supporters are camped outside military bases in different cities and are asking the armed forces to stage a coup.

The Catholic Church has not been immune to political turmoil. Since the beginning of the presidential campaign, there have been numerous cases of worshipers interrupting masses and accusing the clergy of supporting Lula.

Although Bolsonaro is Catholic, he receives most of his support from Brazil’s growing evangelical and Pentecostal congregations, and his supporters often accuse the Catholic Church – and in particular the country’s bishops’ conference – of being biased towards left.

At the same time, many bishops and priests have openly supported the aims of the Bolsonaro administration, especially regarding its pro-life support.

However, since Lula’s second-round victory, it has been Bolsonaro’s supporters who have been most responsible for threats against Catholic clergy. In the past week, there have been at least two death threats directed at members of the Church, not including the threat made against Ferreira.

In the city of Sidrolândia, in the state of Mato Grosso do Sul, a predominantly Bolsonarian community told a priest to leave the parish in which he had worked for six years. During the presidential campaign, the cleric announced that he would vote for Lula.

Local journal Correio do Estado reported that the priest asked to remain anonymous due to the death threats.

In the state of Rio Grande do Sul, Franciscan friar Sérgio Görgen, a longtime advocate for small farmers who ran for the state legislature as a member of Lula’s Workers’ Party, received death threats from a local politician on 7 November.

During his campaign, Görgen released a video in which he appeared outside the Santa Elmira farm, where in 1989 he and dozens of landless peasants promoted a land occupation. The large estate then became unproductive, which under Brazilian law meant it could be expropriated by the government in its land reform program.

But the 1989 demonstration was violently repressed by the police during a raid which left 17 injured and 23 arrested. In his campaign video, Görgen briefly recounted the story of the so-called “Santa Elmira Massacre” and said he hoped the property would one day come under land reform.

José Sérgio de Carvalho, a member of the council of the town of Salto do Jacuí, where the farm is located, mentioned Görgen’s video during an official council session, saying that “no one should be surprised if someone gives a big blow to the head of the brother”, adding that he was ready to be the person to do it.

“This threat is linked to the electoral moment. The most radical segments of agribusiness are very dissatisfied [with Bolsonaro’s defeat]said Görgen Node. Large-scale agricultural enterprises were strong supporters of Bolsonaro, who pledged to open up much of the Amazon region to development.

“I feel threatened, but someone who has undertaken a mission like mine must be ready to face such a situation. my bishop [of the Diocese of Bagé] showed me his solidarity, as well as many Catholic movements,” he said.

In recent weeks, conflicts provoked by Bolsonarian priests have also been reported by the Brazilian media.

On November 6, a priest from Nerópolis, in the state of Goiás, argued with a group of lay people during mass. Witness says Father Danilo Neto told congregants who voted for Lula to leave the Church, news site reports G1.

A video of the moment has gone viral on the internet. The priest is seen talking with a woman, who allegedly criticized him for telling Lula supporters to leave. Neto then said he would leave the place, since the faithful “do not need a priest”. He took off his cassock, threw it on a bench and left the church.

The Diocese of Anápolis said the matter was under investigation and reaffirmed the Church’s neutrality in party politics.

In the state of Paraná, a priest was photographed taking part in one of the roadblocks protesting Lula’s victory. The Diocese of Jacarezinho said on November 10 that Father Carlos Eduardo Casprov had been reprimanded by Bishop Antônio Braz Benevente.

Benevente’s statement also noted that this was Casprov’s second time engaging in political activism: he had previously been reprimanded on April 14.

João Décio Passos, professor of religious studies at the Pontifical Catholic University of São Paulo, said Catholic Pentecostalism and traditionalism have been growing — and converging with support for Bolsonaro since his 2018 campaign.

“These groups have media and a strong social media presence. They tend to be self-referential and break with official Catholic Church guidelines,” Passos said. Node.

This movement has created politically conservative pockets in the Brazilian Church, which tends to be moderately progressive.

“The novelty in the current picture is that these pockets have taken on a self-contained existence and broken with church consensus in the name of their own perspectives,” Passos said.

Mário Betiato, a professor at the Pontifical Catholic University of Paraná in Curitiba, said Brazilian bishops should speak out more.

“Neo-fascism has created divisions not only in the Church, but also in education, in communications, in families. Its major figure is Bolsonaro. The Church does not act to manage such ruptures,” he said. Node.

Betiato argued that “the bishops do not take a public position [against Neo-fascism]» and therefore « the Church is on the verge of schism ».

He blames “poor theological training” for the adherence of priests and lay Catholics to Bolsonarism.

Review: At the Vatican Falls, Victims of Sexual Abuse Wage War on the Catholic Church