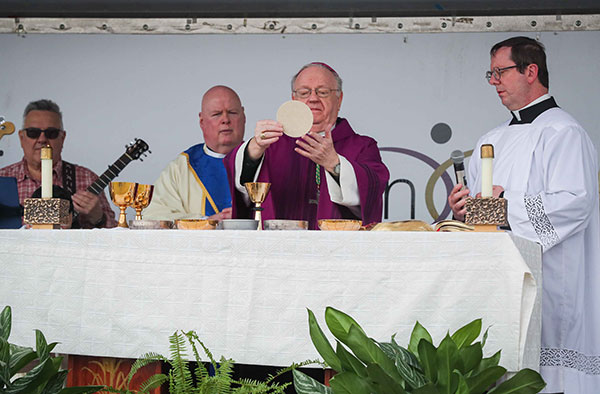 PENNSAUKEN — On an afternoon that began with cool rain and ended with wind and hail, warm sunshine shone as Bishop Dennis Sullivan consecrated the Eucharist during Mass at Cooper River Park.

About 200 worshipers of all ages maneuvered around blankets and chairs to receive Holy Communion during the April 3 Mass celebrated for the annual iRace4Vocations. This is the first time the event has taken place in two years due to the COVID-19 pandemic.

“One of the purposes of this gathering is to pray for vocations to the priesthood and religious life. To get the message across… that God continues to call men to priesthood and women and men to religious life,” Bishop Sullivan said. “We support and encourage those who can hear God’s call and are brave enough to respond. It takes courage to answer. »

The bishop reminded each faithful, man and woman, that it is their responsibility to encourage young people to a vocation, especially when they see that this person can have a vocation.

“To anyone who may have thought of it, fear not. Come and see,” Bishop Sullivan said. Pointing to the dozen priests, the handful of seminarians and the number of nuns present at Mass, he encouraged anyone interested in a vocation to speak to the ordained, in formation or in the service of God.

Some of these seminarians took part in the mass, including transition deacons Cesar Pirateque and Paul Abbruscato. Among the concelebrating priests were Father Robert Hughes, Vicar General and Moderator of the Curia, and Father Adam Cichoski, Diocesan Director of Vocations. The music was conducted by Mike Bedics, director of worship and Christian initiation for the Diocese of Camden, and his wife Molly.

In his homily, Bishop Sullivan spoke of the Day of John Gospel Reading, in which an unnamed woman accused of adultery is brought to Jesus.

“This story is a set-up…it’s a trap, and it was arranged by the religious leaders,” he preached. “If Jesus goes against the law of Moses, they can claim that he disobeyed the religious law. But if he says she should be sentenced to death, Roman law says that Jews cannot accuse anyone of a death sentence. So they could catch him for disobeying civil law.

Bishop Sullivan went on to explain that a “masterful reversal takes place” in which Jesus diverts the focus from himself and the woman and instead puts the spotlight on the accusers.

“Without saying a word, he puts his finger in the dust and begins to write. We don’t know what he wrote, but the religious leaders started slipping away. And then, ‘Let him who has not sinned cast the first stone.'”

“’You can go,’ he told her, ‘but avoid sin,’” Bishop Sullivan said, explaining that the woman “is getting a fresh start, a fresh start, a new life, a future, freedom. God is doing something new.

This meeting, he says, shows that what Jesus did for this woman, he can do for everyone today. “I have been a priest for 51 years, and some of the most memorable experiences I have had…are when I have been able to free someone from the chains of shame and the terror of guilt and even, for the sacrament of penance, from sin.

“I think of those experiences and I think how wonderful it is…for those who experience the mercy of Jesus Christ,” Bishop Sullivan said, adding that religious, especially religious, “Do the same in your teaching, counsel and prayers. I know how many of you have encouraged and helped someone who needed to experience God’s mercy.

Moments after the end of the mass, heavy rains, winds and hail caused many people to flee for safety. The planned 5k run/1 mile walk was canceled, but some worshipers came out after the storm to meet and talk with the priests and seminarians who remained.

In the echoes of history, a story of humanity, of hope