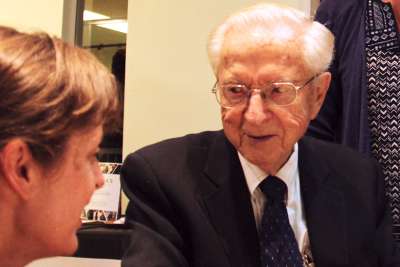 Bishop De Roo, a “Councillary Father” for a “Conciliar Church”

A tender and loving farewell to the Bishop Emeritus of Victoria, Remi De Roo, included “the warm greetings of Pope Francis, who joins us in mourning and thanksgiving, and who sends his blessing.”

This greeting was conveyed by Cardinal Michael Czerny, who came from Rome for the funeral of the last Canadian father of the Second Vatican Council.

“Above all, he was a Council Father who devoted the next 55 years to continually rediscovering what it means to live as a Council Christian and as a Council Church, and now indeed as a Synodal Church” , Czerny said in remarks published at The Catholic Register before the February 12 funeral mass at St. Andrew’s Cathedral in Victoria, British Columbia

“The progressive positions and the apostolic service of Bishop De Roo have been highly appreciated by some and much decried by others,” he said. “It has remained constant despite a certain degree of marginalization and hostility, even within the Church.”

Bishop De Roo’s oldest friend, retired senator Doug Roche, praised the bishop as a giant in the history of the Canadian Church.

“Only history will reveal its true greatness,” Roche said in prepared remarks.

Quoting from Gaudium et Spes, the Church’s Vatican II constitution, Roche described his friend as “visionary, controversial, and a beacon of light to all who know ‘the joys and hopes, sorrows and anguishes of Christ’s followers.’ ”

Czerny emphasized how much Bishop De Roo’s insistence on Vatican II is needed now in the Francis papacy.

“It was Remi’s prayer life that enabled him to continue to look to our Church and the world with love and hope, and, as Paul told the Romans, to be patient in suffering,” said Sr. Marie Zarowny, who started the Diocese of Victoria’s Social Justice Office under De Roo and is now President and Chairman of the Board of the Corporation of the Sisters of Saint Ann.

Bishop De Roo died on February 1, just before his 98th birthday. He was Bishop of Victoria for 37 years. As one of the youngest bishops in the world, he made four separate interventions at the 1962-1965 Council, including statements on the role of conjugal love in marriage and the role of women in the Church . He remained loyal to the council until his last days.

During his last public interview with former director of the Diocese of Victoria’s Office of Social Justice, Dave Szollosy, in June 2021, Bishop De Roo was asked if the Church needs a Third Vatican Council.

“Rather than another council, we need a determined effort to re-implement all that Vatican II brought,” the bishop replied.

Archbishop De Roo welcomed the papacy of Pope Francis with joy and remained hopeful and faithful to his Church.

“I myself am quite serene and confident that, despite the problems, the Spirit is at work,” he told Szollosy.

“Know that as long as we follow the path of justice, peace and truth, we are on the right path. If we stumble once in a while, that’s perfectly, completely human.