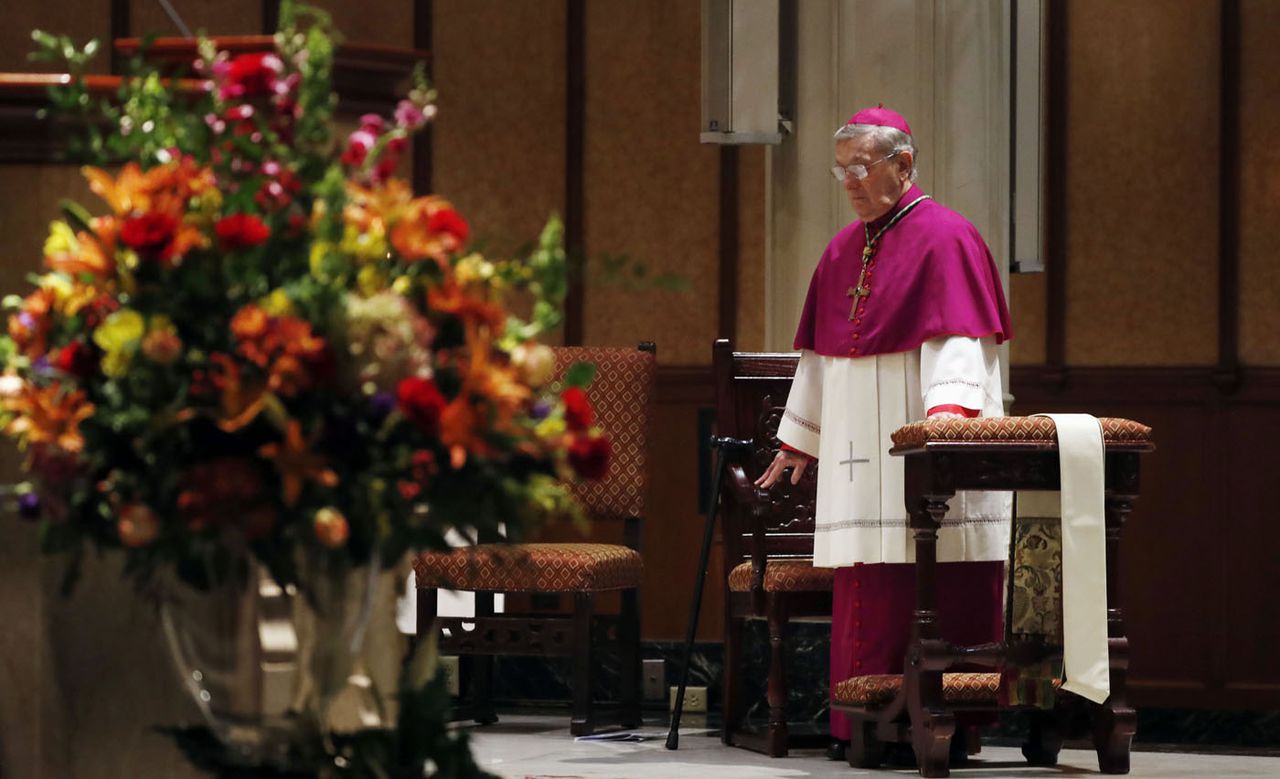 Bishop Anthony M. Pilla, native of Cleveland who guided Catholics in northeastern Ohio for a quarter of a century, dies at 88

CLEVELAND, Ohio – Bishop Anthony M. Pilla, a Cleveland native who helped start a national dialogue on the role of the church in the city and guided Catholics in northeastern Ohio for over d ‘a quarter of a century, died Tuesday.

Pilla, who was bishop of the Diocese of Cleveland from 1981 until his retirement in 2006, has died at his home, the diocese confirmed in a statement. He was 88 years old.

In a statement, the current bishop of the diocese, Edward C. Malesic, remembered Pilla as a “very warm, caring and deeply faithful shepherd.”

“He was generous with his time and shared with me his knowledge and concern for the diocese,” Malesic said in his statement. “As a leader of the National Church, Bishop Pilla has been an inspiration and an example to me throughout my priesthood and during my years as bishop. I felt so welcome by him when I arrived in the Diocese of Cleveland, a church he loved so much. As a leader in the community and a friend of so many people, he will be sorely missed. “

Funeral services have not been announced.

His tenure was filled with the promise of increasing secular participation, but clouded by a sexual abuse scandal.

One of her first official acts as bishop was to welcome into her home a local nun who had been killed in El Salvador, and this had a powerful impact on an episcopal ministry that often responded to the needs of the poor. Its Church in the City initiative has become a national model for engaging communities in recognizing the human costs of urban sprawl.

Unlike other large cities such as Detroit, New York, Chicago and Philadelphia, Pilla did not order the widespread closure of urban parishes as Catholic herds moved east, west and south. He said active worship communities were a vital part of the city’s neighborhoods, and only a dozen parishes in the city closed in the first quarter-century of Pilla’s tenure.

But in doing so, he transferred the responsibility of keeping the parishes open to an ever smaller number of priests. In their place, however, there was an explosion of lay ministries, from ward administrators to altar girls to extraordinary ministers of the Eucharist.

Nationally, Pilla became only the second prelate with the rank of archbishop to become president of the National Conference of Catholic Bishops. He has been hailed as a moderate leader who has sought to build consensus among liberal and conservative bishops and improve relations between the Vatican and the church in the United States.

Locally, it also allowed great latitude for Catholic expression in the diocese, where masses in Latin were permitted as well as programs from militant groups such as FutureChurch, which has its national headquarters in a parish in Cleveland.

His greatest trials came in his final years as bishop, when poor health and a clergy sexual abuse scandal drained much of his energy and damaged his reputation.

During its tenure, the diocese transferred abusive priests to other posts and dioceses, ignored the compassionate cries of many victims, and turned on Catholics who were abused as children in the courtroom. with an aggressiveness that left many victims feeling like they had been mistreated a second time by their church.

When the extent of the scandal became known, Pilla removed several abusive priests from the active ministry and promised that any priest who committed even one act of sexual abuse of a minor would not be sent back to parish work. .

It also appointed a lay review board and put in place comprehensive reporting procedures and training programs to detect and prevent abuse. In a moving Maundy Thursday ceremony, he washed the feet of a woman assaulted by a priest when she was a child.

Some people close to the bishop said Pilla was gripped with great sadness as he became more aware of the suffering created by the scandal.

In January 2006, shortly before celebrating his 25th birthday as the ninth bishop of Cleveland, Pilla announced that he had sent a letter to the Vatican offering his resignation before the mandatory retirement age of 75. Pilla retired in May 2006. Pilla gave no reasons. for offering his resignation early, but said it would be a good time for the diocese to have a new spiritual leader.

Yet the city’s first native Catholic leader never gave up, spending much of the last years of his ministry trying to implement a Vibrant Parish Life program encouraging churches to share resources and services with each other.

“You don’t care what other people think,” he said in an interview. “You only care what God thinks. “

The son of Italian immigrants, Pilla grew up in Cleveland in the 1940s, during a time of racial unrest as black residents moved in alongside white families on the East Side.

Pilla remembered the race riots while attending Patrick Henry High School, and it was his sense of helplessness over the suffering of his black friends that influenced his later decision to become a priest.

“I remember thinking it shouldn’t be like this,” Pilla said in an interview. “You want to make things better. “

During his freshman year at Cathedral Latin High School, a brother arrested him after soccer practice and asked him to consider becoming a cleric. A year later, he decides to go to seminary.

Pilla was ordained a priest in May 1959 and spent a short time in a parish before becoming a high school teacher at Borromeo Seminary in Wickliffe. He was appointed rector-president of the high school in 1972, secretary for clergy and religious services in 1975, and auxiliary bishop in 1979. He was installed as the ninth bishop of Cleveland on January 6, 1981.

Some Cleveland bishops were going to don cardinal robes or become archbishops, but Pilla, a devoted son to his widowed mother and his diocese, has always made it clear that he is happy to be in Cleveland.

In an interview in 2001 on the occasion of his 20th birthday as bishop, Pilla put a hand on his heart and smiled: “This is my city. This is my city and I love it.

His first days as a bishop were a baptism of fire, as he welcomed into his home the body of Sr. Dorothy Kazel, one of the members of the Cleveland diocesan mission team found murdered in El Salvador in December 1980. Pilla said that realizing the cost of a life dedicated to the service of God was one of the defining moments of his time as bishop.

“When you stand up for gospel values, it costs you,” Pilla said.

In his first year, Pilla published pastoral letters calling for an end to the nuclear arms race and encouraging Catholics to promote economic justice. The social justice program that Pilla is best known for is his Church in the City initiative encouraging urban, suburban and rural residents, government officials and businesses to work in partnership with each other.

The initiative has contributed to a national dialogue on issues of urban sprawl and the responsibility of the suburbs for the common good of the region.

There were a few controversial moments early in his tenure. In 1988, the bishop fired the four journalists from the Catholic Universe Bulletin, which was losing money. Pilla called the layoffs a “reorganization”, but the Cleveland Newspaper Guild called it a “union breakdown”.

But for most of his time as bishop, the calm and soft-spoken Pilla gave great freedom to conservative and liberal voices in the community and avoided confrontation in areas ranging from parish closures to discipline of priests. When controversy erupted over bishops denying Communion to politicians supporting legalized abortion, Pilla said he would leave that to the conscience of those responsible.

Some of Pilla’s most memorable moments were the services for the disabled or the annual celebration at St. John’s Cathedral for couples who have been married for 50 years or more. “Love is tangible in this cathedral,” Pilla said.

Among his most dramatic moments of his time as bishop was a mass he said at the Cuyahoga County Jail in the summer of 2000. “What I’m absolutely certain of is May God love you, ”Pilla told the prisoners in his homily.

“What have been the happiest times in my ministry? Pilla asked in a 2005 book celebrating his silver anniversary as bishop. “I can answer without hesitation: the times when I was closest to people – when I was able to bring them the beauty and the richness of the Word of Christ and the healing power of his sacraments; when I could share their joys and their sorrows; when I was able to assure them that, despite all our faults and failures, we are important in the sight of the Lord.

Nationally, Pilla guided the American Bishops’ Conference from 1995 to 1998, winning praise for a leadership style that listens without twisting its arms.

This is also when Pilla will experience serious problems with her own mortality. Less than a week after presiding over the meeting of bishops in November 1977, he went to the hospital for a quadruple bypass surgery. The following month, he would learn that a potentially fatal staph infection would put him on the sidelines for three months. In the fall of 1999, he underwent prostate surgery.

What he learned in the long loneliness that accompanied his recovery from his previous health issues, Pilla said, is that even when it seems like no one else really understands or cares, “I know God cares.”

In this knowledge he found peace and a new perspective on life and ministry.

“Every day is a gift,” said Pilla. “You’re just doing your best.”

But revelations of massive wrongdoing by priests sexually assaulting children – and the failure of churches to deal with the problem – swept through the Diocese of Cleveland and the nation in 2002.

The Diocese of Cleveland reported that there had been allegations against 118 priests since 1950. More poignant were the stories of several victims who said they were repelled or attacked by the church when they came forward.

Pilla would apologize, but the scandal would be the most painful period of his episcopal ministry.

The bishop could find comfort in his own sermons, which often touched on the theme of God as a merciful parent who offers forgiveness to those who feel remorse and repent of their sins.

“Jesus above all,” said Pilla, “was someone who cared about people and was ready to forgive anyone. “

David Briggs is a former religious writer for The Plain Dealer.

cleveland.com and The Plain Dealer reporter Cameron Fields contributed to this story.

How writer Sean Avery Medlin created his own style of poetry