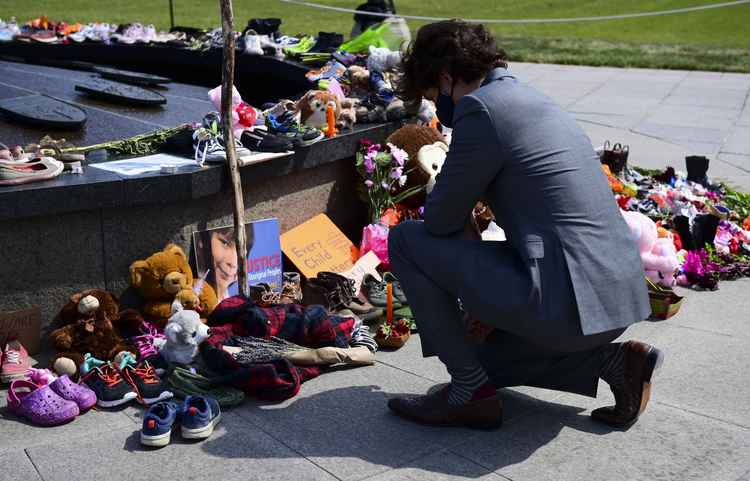 Arson and vandalism targeting primarily Catholic churches continued across Canada in July. the last incident occurred on July 19, when firefighters responded to reports of fire at 3:30 a.m. at St. George’s Coptic Orthodox Church in Surrey, British Columbia. The church was completely destroyed.

The apparent arson and degradation of church property came shortly after a report confirming the burial sites of at least 215 remains at Kamloops Indian Residential School in B.C. was released on May 27. . Hundreds of other unmarked graves have since been located in a number of former residential schools for Indigenous children.

The upsurge in recent church fires started in the early in the morning on June 21—National Day of Indigenous Peoples in Canada. Church of the Sacred Heart, on Penticton Indian Band in British Columbia, was destroyed by fire at 1:30 am. Less than two hours later, a fire consumed St. Gregory’s Church in Oliver on Osoyoos Indian Band land, also in British Columbia.

As of mid-July, more than a dozen Canadian churches had been reported damaged or destroyed by fire. Most of the churches were wood frame and were over 100 years old.

As of mid-July, more than a dozen Canadian churches had been reported damaged or destroyed by fire.

Sources in the Royal Canadian Mounted Police did not have an official national tally of church fires and vandalism at church sites, but Canadian media reports that dozens of apparent arson or acts of Significant vandalism has taken place in churches across the country since the Kamloops report was released.

RCMP sources said there were no plans at this time to form a national task force to investigate the apparent vandalism and arson in Catholic, Anglican and other Protestant churches, which occurred in Alberta, British Columbia, Calgary, Manitoba and Nova Scotia. Local RCMP, Tribal and Metropolitan Police will continue individual investigations in their jurisdictions, according to RCMP spokespersons.

In British Columbia, where at least eight Roman Catholic and Anglican churches have burned down, RCMP say they have no suspects and would not say whether investigators believed the crimes were related to the continued discovery of anonymous graves in the former residential schools, many administered by Catholic religious orders in Canada in the 19th and 20th centuries.

“While we are certainly sensitive to recent events, we will let the evidence guide us in each of the investigations and will not speculate on possible motives,” said Staff Sgt. Janelle Shoihet, Senior Media Relations Officer for the RCMP in British Columbia.

“Our officers worked closely with Indigenous leaders and the local church administration to discuss possible options for crime prevention,” said Staff Sgt. Shoihet said, responding to America by email. She said RCMP officers had stepped up patrols around local churches.

Fury against the Catholic Church and other Christian churches has spread widely in Canada as members of First Nations communities locate the remains of schoolchildren.

She added that many churches that were damaged or destroyed by apparent arson were in small rural areas. At least one church was no longer in use when it was destroyed by fire.

“Investigators share information. However, it is too early to say that the fires in different parts of our province are linked to a particular group or person, or to each other, ”she said. “Each investigation is carried out by the competent police, but monitored at the provincial level.”

Fury against the Catholic Church and other Christian churches has spread widely in Canada as members of First Nations communities locate the remains of schoolchildren. Intended to assimilate First Nations children in Canada, residential schools were described in a 2015 Truth and Reconciliation Commission report as part of a government-sponsored campaign to “”cultural genocide. “

According to the report, more than 4,000 children have died while in school care, although many believe the true toll has yet to be revealed. The deceased children were generally not returned to their villages and families of origin for burial, but were buried there. Many families never found out what happened to their children.

According to the report, more than 4,000 children have died while in school care, although many believe the true toll has yet to be revealed.

First Nations leaders condemned the fires. Chief Clarence Louie of the Osoyoos Indian Band, who is also tribal president and spokesperson for the Okanagan Nation Alliance, said Global News on June 27, there is no doubt that the fires were started intentionally.

“Obviously, it’s the same group of people. Why did they do it under cover of darkness? Because it is a criminal act and they are criminal, ”he said.

Perry Bellegarde, National Chief of the Assembly of First Nations, said on June 30 that the Indigenous way is not to burn things down, but rather to build relationships and come together.

In a statement released on June 26, the Lower Similkameen Indian Band Council expressed “disbelief and anger” at the church fires. “These churches represent places of worship for community members as well as gathering spaces for many people during various celebrations or times of loss. It will be deeply felt for those who have sought solace and comfort in the Church ”, he said in a statement.

The council added, “It is a symptom of the intergenerational trauma that our survivors and intergenerational descendants experience, [but] there are supports to help deal with these emotions in a more healing way.

Perry Bellegarde, National Chief of the Assembly of First Nations, said on June 30 that the Indigenous way is not to burn things down, but rather to build relationships and come together.

Some politicians are also starting to speak out. On Twitter, Alberta Premier Jason Kenney said the Morinville church fire “”appears to be another violent hate crime targeting the Catholic community. “He said that the centennial church” was the heart of Morinville and a key part of the history and spiritual life of the Francophone community of Alberta. “

Trudeau added that he understands the anger many people feel towards the federal government and the Catholic Church. “It’s real and it’s completely understandable given the shameful history we all are [becoming] more aware, ”he said at a press conference. “I can’t help but think that burning down churches is actually depriving people who need mourning, healing and mourning places where they can cry, think and seek support,” he added. .

The Canadian government apologized for the schools and Mr. Trudeau asked Pope Francis to issue a formal apology.

With reporting from the Catholic News Service and the Associated Press.

Listen next: The Racial Calculus of Canada

A roundup of news and announcements in Austwick