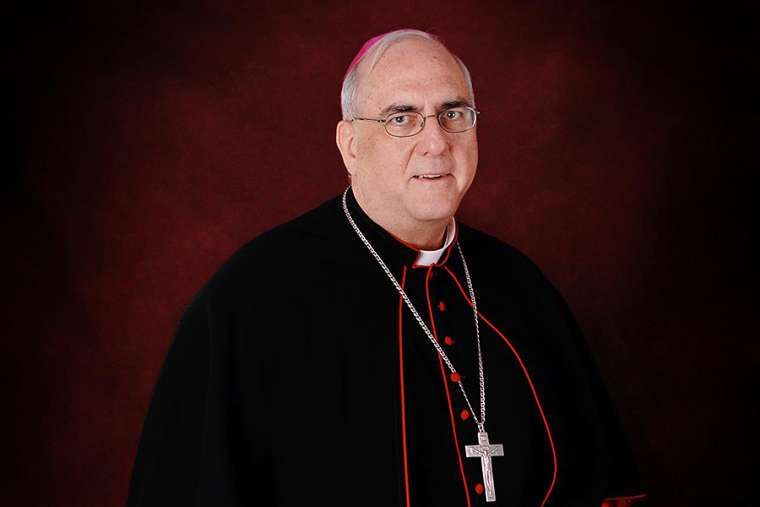 Archbishop of Kansas: Attacks on Catholic churches are ‘un-American’

For those asking, the school gates have been vandalized with wording that we won’t repeat here.

Here is a photograph taken by a parishioner of the statue of Mary which was spray painted. pic.twitter.com/XDIF7PiIYS

According to the archdiocese, the authorities have been notified.

Supporters of the pro-life amendment have already been targeted, according to Mackenzie Haddix, associate director of communications for Value Them Both. The coalition is led by Kansans for Life, the Kansas Catholic Conference and Kansas Family Voice.

“The attacks on the Church of the Ascension in Overland Park are heartbreaking and inexcusable,” Haddix told CNA. “This is not the first time acts of vandalism have taken place at churches expressing support for the Value Them Both Amendment.”

Haddix called on pro-abortion groups opposed to the amendment, such as Kansans for Constitutional Freedom, to condemn the “hateful actions that took place at Ascension and the vandalism and theft that took place across Kansas.” .

She pointed to the vandalism of church signs and signs in support of the pro-life amendment.

“We continue to receive reports of individuals having signs vandalized on a daily basis,” she said. “Mostly they are spray painted with vulgar messages, but many have also been punched in or completely destroyed.”

In a statement Responding to the recent attack on his church, Church of Ascension pastor Fr Gary Pennings said parish signs in support of the amendment “have been repeatedly vandalized and many parishioners have reported the theft of their yard signs”.

“Although it was a sad event, it is not surprising,” he said of the attack, which he called “probably an angry reaction to the plea of the Church for the adoption of the Value Them Both Amendment”.

He encouraged his parishioners “not to be discouraged, to stand firm and never tire of doing good.”

“Let your faith, informed by the teachings of the Church of Christ, guide your conversations and actions,” he concluded. “Learn the real facts about the Value Them Both Amendment and feel free to engage in reasoned dialogue on the issue.

As part of this free service, you may receive occasional offers from us on EWTN News and EWTN. We will not rent or sell your information and you can unsubscribe at any time.

“Never be afraid to tell others why we Catholics believe what we believe, always doing so, of course, with patience and charity. Last but not least, please pray for peaceful dialogue, mutual respect and a sincere search for the truth”.

Katie Yoder is a correspondent in the CNA office in Washington, DC. She covers pro-life issues, the American Catholic bishops, public policy and Congress. She previously worked for Townhall.com, National Review and the Media Research Center.